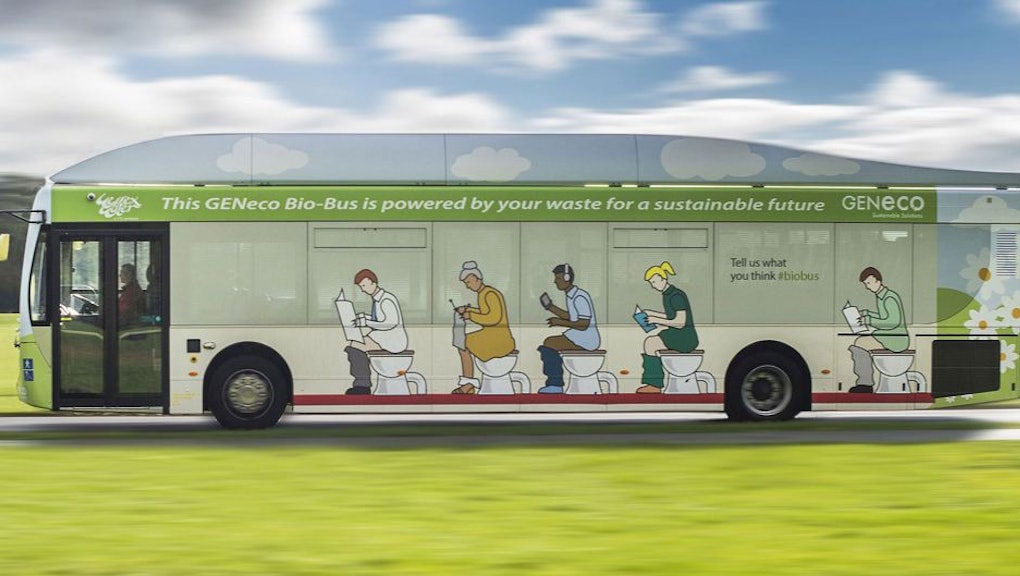 This Bus Is Going Viral Because of a Very Unusual Feature

A bus in Britain is giving a whole new meaning to alternative fuel vehicles. The eco-friendly bus runs on an unexpected source of gas – human feces.

The brand new "Bio-Bus" took to the roads Thursday to run its route between Bristol Airport and the city of Bath. The aptly nicknamed "poo bus" runs on biomethane gas, which comes from the breakdown of human sewage and food waste.

Essentially, anaerobic bacteria breaks down the waste to create methane-rich gas. The bus' combustion engine is akin to that of normal buses, except "the gas is stored in dome-like tanks on the roof."

But just because there's poop involved doesn't mean that it smells like, well, shit. Impurities are removed to make the emissions "virtually odorless" and to increase sustainability and decrease emission levels.

Who knew poop was more than just waste? The fuel goes a surprisingly long way. A tank full of poop motors the bus an estimated 186 miles, and just requires the annual waste of five people. In fact, one person's annual waste – food and sewage included – can run a bus for 37 miles.

Considering all of the upsides of this alternative fuel, there's a chance it will become a big thing in public transportation. Besides, Britain isn't the first to give it a try. Sweden, for example, has been using biogas as fuel "for years," the Atlantic reports. Oslo, Norway, converted 80 buses to this alternative fuel source in 2009, and in 2010, sustainable energy firm GENeco converted a Volkswagen Beetle.

In the future, passengers can likely look forward to taking a seat and enjoying the ride knowing that there's more waste going into their ride than there is coming out of it. We might as well put our waste to good use.

All aboard the poop bus.