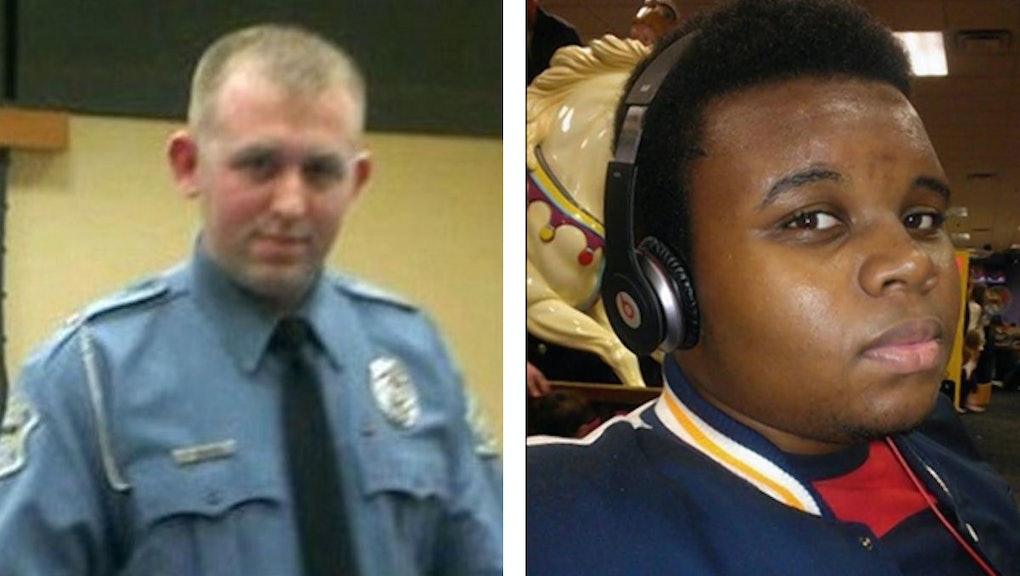 The Ferguson Decision Was No Surprise to Black People

This decision wasn't a surprise — but it stings all the same.

After weeks of privately reviewing evidence and hearing testimony, a grand jury chose not to indict Officer Darren Wilson in the August shooting death of 18-year-old Michael Brown in Ferguson, Missouri. The public may never know what happened behind those closed doors, or what ran through the hearts and minds of the jurors during deliberations. But their ruling furthers an unfortunate reality, one that's been long understood by many blacks and people of color.

Not indicting an officer for killing an unarmed teenager — a teenager like Brown — underscores that it is indeed open season on black people across the country.

For nearly three years, this episode has played out repeatedly with different victims. When George Zimmerman killed Trayvon Martin in February 2012 and a jury eventually found Zimmerman not guilty, many people, especially in the black community, experienced déjà vu. For them, this wasn't only a miscarriage of justice, this was life as usual, as it has been for decades.

With each passing week, yet another story emerges and another black family grieves. In recent days, Tanesha Anderson, Akai Gurley and Tamir Rice were killed by the very people who should have been helping or protecting them instead. All three of those people were black. Their badge-carrying assailants weren't. And with this unfortunate narrative repeating itself, one can only wonder what would have happened if the victims were white. It's unlikely that many would have ever known their names — because lethal force wouldn't have been used.

That wasn't the reality for Tanesha or Akai or Tamir, however. And it certainly wasn't the reality for Brown. It may be hard to admit, but this pattern is becoming harder and harder to ignore, as is the fact that that anti-black racism on both institutional and personal levels informs these deadly encounters. From unjust traffic stops to stop-and-frisk policies that disproportionately target black and brown people, racial injustice has for years been perpetuated in part by those tasked with upholding law and order.

The jury's decision not to indict will only reinforce the distrust that exists between black people and the police, a relationship marred by too many examples to count. "My cop anxiety probably predates my personal experience with the storm-trooper routines of the Pittsburgh Bureau of Police," Keith Reed wrote in 2013. "For Black men anywhere, it's like learning how to walk: You don't remember when it happens, but you know it's necessary. Being anxious around police is a coping mechanism for dealing with the mortal threat they pose."

There has indeed been justice for some black youth, albeit mostly in cases not involving the police. In October, Jordan Davis' killer was found guilty of first-degree murder after shooting him in an argument over loud music. And in August, the man who killed Renisha McBride — an unarmed woman who came to his doorstep seeking help after a car accident — was found guilty of second-degree murder. On some occasions, the system gets it right. Sometimes.

These incidents, including Brown's death, shouldn't have happened in the first place. This isn't about what he may have shoplifted, or what Martin was wearing or what Tamir was holding. This is about the value of black life in America, a value that seems to be systematically depreciating — especially in the eyes of the police.

Officer-involved shootings are tragedies all-around, and the complex stresses experienced by many cops should not be ignored. But tonight, the truth is Wilson will be with his family, and Brown will not. Black people deserve to live in a society where their lives are deemed just as important as the life of the lighter-skinned person standing next to them. Black people deserve more than having to hope, time and again, that jurors and other officials recognize their right to simply exist.