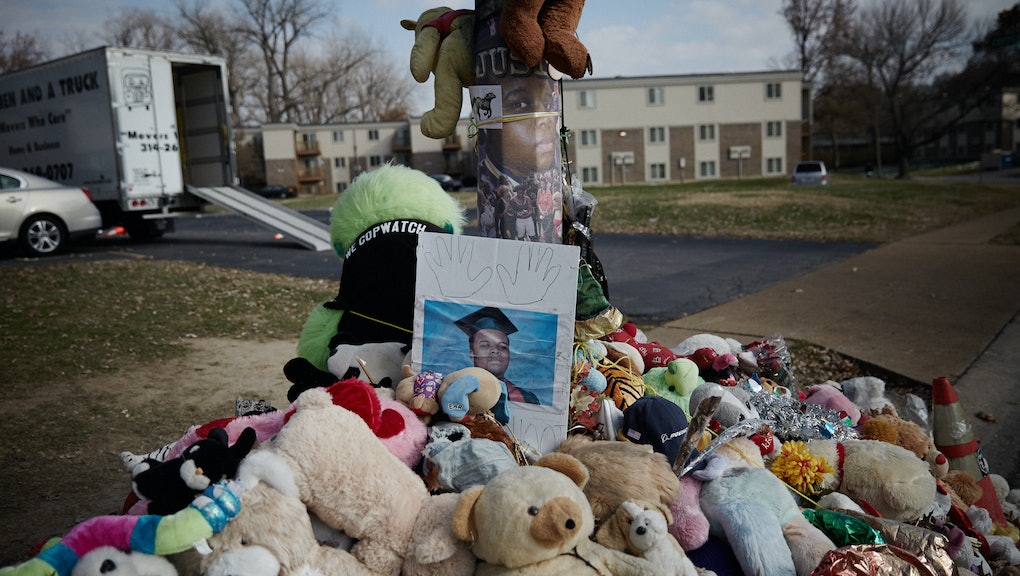 The block where Officer Darren Wilson left Brown's body for hours in the August heat is now adorned with stuffed animals, ball caps and hand-scrawled notes from children, a grim but moving tribute to a boy who died well before his time.

On a Wednesday afternoon in mid-November, families could be seen wheeling their belongings into moving trucks, their breath thick with the autumn chill.

"They're tired," says Tory Russell, 30, a St. Louis native and co-founder of Ferguson activist group Hands Up United. "Moving out. They don't want to deal with it anymore."

In the months since Brown's shooting, this spot has become more than a memorial. It's a home, too, but also something bleaker — a reminder of death in a community still reeling from unrest and the overwhelming attention that came with it.

News reporters still frequent the area, asking tired questions of anyone who'll give them the time of day. It's a heavy burden for a neighborhood few Americans had even heard of before last summer. And as the day approaches when a grand jury will decide whether to indict Officer Wilson in Brown's death, that burden weighs heaviest on one group in particular:

Russell and a group of likeminded young organizers have spent the last three months coordinating "actions" — protests, shutdowns, disruptions of high profile events — throughout the St. Louis area. Their presence has remained steady regardless of whether the media is around, a testament to how the biggest dog in this fight undeniably belongs to the region's black and brown youth.

Their goal is simple: Make sure what happened to Michael Brown doesn't happen to anyone else.

In this case, that requires a holistic approach, whether it's grassroots organizing, free breakfast programs, technological literacy classes or a community library where children and adults can read and learn together.

"We want to work with elected officials, but that hasn't really happened yet," Russell says. "It's very important ... but either the system can be fixed, or it can't because it's working [against black people] exactly the way it was designed to."

This dynamic is evident in the official responses to the shooting. On the national level, President Barack Obama's failure to stand publicly with the protesters weighs heavily on Russell's mind. "This is his Hurricane Katrina," Russell says. "If Sasha and Malia were down here, you can bet he'd say something."

Ferguson Mayor James Knowles III has also made the absurd claim that "no racial divide" exists in his city ("He doesn't even live in Ferguson," Russell says).

Meanwhile, young people from around the country — a demographic that was instrumental in securing Obama's back-to-back terms as president — are flocking to Ferguson for a different kind of political showdown, one that doesn't rely on politicians, church leaders or showing up at the voting booth.

They come from all over: Abby Bobé, 30, arrived from Oakland, California via North Philadelphia in early September and hasn't left since.

Bobé's job with Hands Up United is to ensure black youth in Ferguson are technologically fluent. That means web development, HTML and Java Script, as well as consulting and design skills, for starters.

"Tech changed my life," she says. "[Here] we're trying to teach kids how to build their own businesses ... give them that new set of 21st century skills." She describes tech literacy as "the new reading and writing," saying it's essential for competing in the modern economy.

Bobé and her co-organizers have been running workshops and developing "social justice hackathons" for youth and adults ever since. But the battle for self-sufficiency and preservation amidst routine degradation isn't an easy one — in fact, it's all too familiar for many black youth in St. Louis.

It's not hard to understand why. In the nearby suburb of University City, a group of almost 100 elementary, middle and high school students meets in the gym at Pershing Elementary School each week for Real Talk, Inc., a non-profit forum run by Sultan Muhammad, an ex-con and former gang member. Muhammad is a passionate speaker. He regales his students with tales of his former life, cautioning them against the mental and social snares that help fuel the region's violence (as recently as 2013, St. Louis was ranked second on CNN Money's "Most Dangerous U.S. Cities" list).

"How many of you, in your short lives, have been to three or more funerals for someone who died violently?" Muhammad asks the room. Almost one quarter of the children raise their hands.

The lesson is clear: Violent death was a fact of life here long before Michael Brown was killed. Yet Brown's death assumes a unique space in these children's lives, as their schools are shut down and older family members take to the streets in protest, facing tear gas, rubber bullets and the constant threat of arrest.

"Every time my mom went out to Ferguson, I would be so afraid," says Gage Hendrix, age 10. His mother, Kris Hendrix, 34, helps Muhammad run the Real Talk workshop and is active in the community. "I would actually be trying to call her all the time. If she [didn't] answer, I [would] literally freak out."

Nineteen-year-old Nia Walker fears for her brother's life every time he leaves home, as well as for those of her friends. "If I lost my brother, I don't know what I'd do," she says. Walker — originally from the suburb of Rock Hill, Missouri — helps mentor the children at Real Talk. She speaks in a measured but heartfelt tone about the toll Brown's death has taken on young people throughout St. Louis.

"It's hurtful," she adds. "Like, why did you need multiple shots?" (An autopsy revealed that Brown was hit by six bullets, according to the St. Louis Post-Dispatch.) "You already shot him ... [And] seeing a cop that's supposed to protect us do that, we're not sure if we want to trust you."

The pain Brown's death has elicited is palpable everywhere you turn. Young people in St. Louis shoulder a heavy burden, often in spaces where talk of the shooting is discouraged. Russell even claims many classrooms won't allow questions about Mike Brown for fear of disruption.

University City seems an anomaly in this case. Middle and high school students will actually be allowed to walk out of class in protest — so long as they stay on campus — in the event the grand jury decision is announced on a school day.

"We want to make sure we're protecting the students' right to free speech," says DeAun Blumberg, Executive Director of Communications and Community Outreach for the School District of University City.

A common thread linking these young people is their desire for peaceful resolution — but a firm one nonetheless. And whatever the grand jury decides, their goals will remain the same, Russell says. But it won't be an easy task. Despite constant media reports characterizing protesters as violent, any brief observation of their interactions with Ferguson police reveals the opposite; it is the police who often constitute the biggest barrier to peaceful progress.

"Ferguson never gets a break," says Nia Walker. "[But Mike] never gets to rest in peace until this is all done ... we need to [come together and] end this in a peaceful ... way."

Tory Russell agrees. When asked for the one thing he wanted people to know about his organization and its allies, he had one simple answer: "We're peaceful."