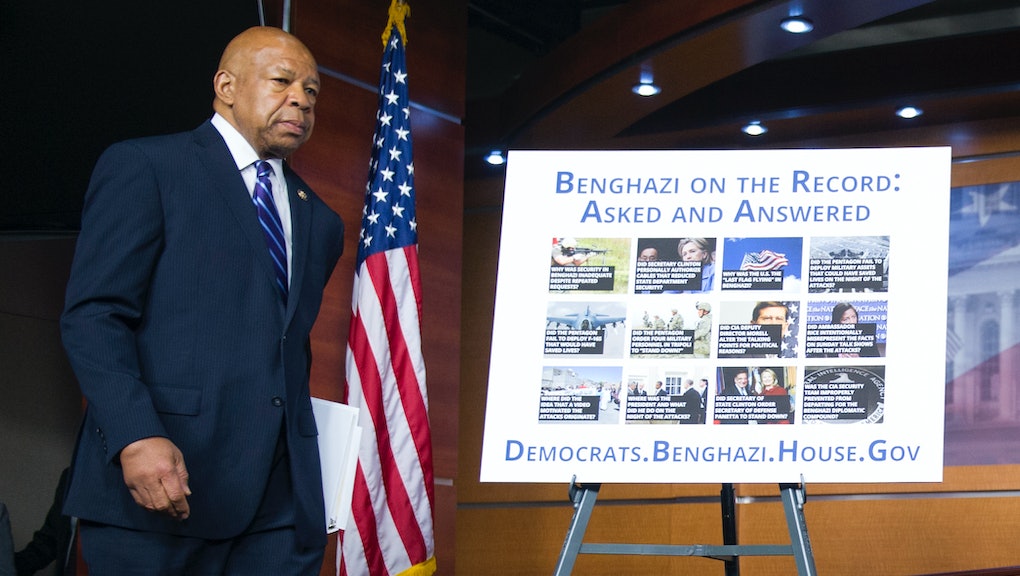 After 2 Years, Republicans Have Finally Figured Out What Happened in Benghazi

That news again: There is no Benghazi conspiracy.

The new report, titled the HPSCI Final Benghazi Report, virtually exonerates the Obama administration of any deliberate wrongdoing during or after the attack. The Associated Press reports:

... the investigation of the politically charged incident determined that there was no intelligence failure, no delay in sending a CIA rescue team, no missed opportunity for a military rescue, and no evidence the CIA was covertly shipping arms from Libya to Syria.

The assessment debunks many of the most persistent myths surrounding the assault on the consulate, including that administration officials watched the attacks in real-time and ordered paramilitary forces capable of stopping it to "stand down." It also destroys the idea that National Security Advisor Susan Rice (then U.S. ambassador to the UN) lied to the American public about the circumstances of the attack. Instead, the committee found that intelligence analysts disagreed what triggered it and conveyed the wrong opinion to Rice.

So did the Obama administration do anything wrong? Yes. The report did conclude that the U.S. compound in Benghazi had inadequate security and that State Department security agents knew the facility wouldn't stand up to a coordinated attack.

It also found that "requests for security improvements were not acted upon in Washington."

However, there was "no intelligence failure prior to the attacks." Not a single person in the U.S. government saw the specific September 11, 2012 attack coming. When it did come, it was the work of six militias in conjunction with Qaddafi loyalists.

There should have been better security, but these are problems not unique to Benghazi. A prior House assessment clarified that "State Department personnel serve the nation with distinction ... operating in the most dangerous areas of the world. Their security cannot be guaranteed, nor do they expect it to be guaranteed." The Bush administration presided over at least 13 embassy attacks, including several that resulted in more American fatalities.

After the attack, administration officials stepped up their game by sending dozens more security guards to high-threat embassies and installing elaborate security systems in high-risk embassies. Assistant Secretary of State for Diplomatic Security Gregory B. Starr reported "tremendous progress" on implementing 29 recommendations from an independent review panel for future security.

That's not to say Benghazi wasn't a big deal. But that doesn't make it OK to personally blame Obama, Hillary Clinton or Susan Rice for the scandal when multiple investigations have found no deliberate wrongdoing or attempt to mislead the public whatsoever. Instead, congressional Republicans would be better off spending their time working to prevent another attack than desperately trying to mine the last one for cheap political points.

The conspiracy just isn't there. But don't expect that to slow the GOP down — an eighth investigation will begin in May. Maybe if we're lucky, we'll get all the way to a dozen.