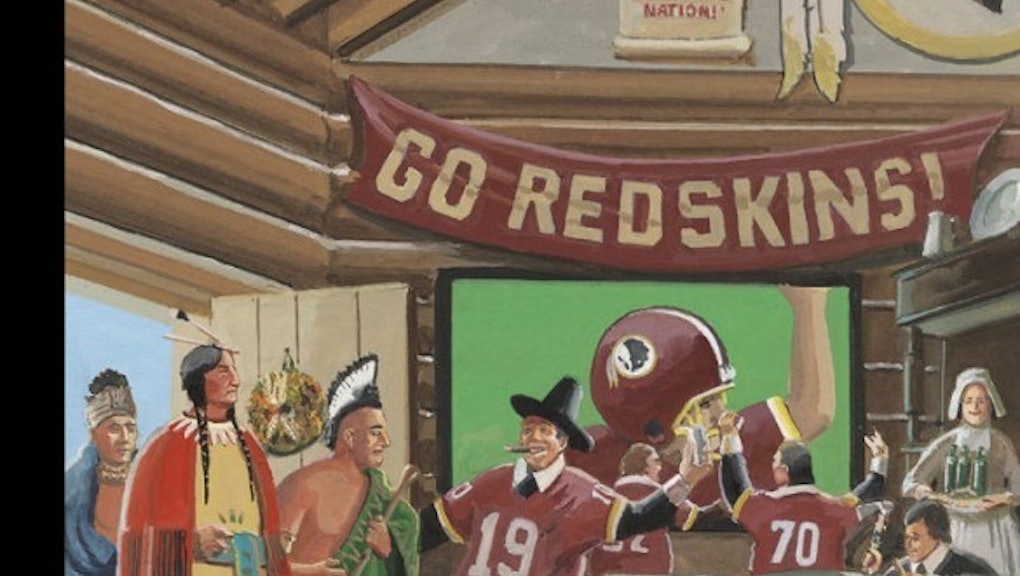 The New Yorker has a twist on the old Thanksgiving tale that may not warm the hearts of fans of Washington's NFL team.

An upcoming cover comic offers a take on the allegorical first Thanksgiving, in which pilgrims and Native Americans feasted in the spirit of cooperation. Things are a little different here, where the pilgrims are celebrating their favorite football team.

"This is 2014, and it seems a little late to be dealing with that stuff," cover artist Bruce McCall said in a statement. "It should have been quashed a long time ago. We did everything to the Indians that we could, and it's still going on. It seems crude and callous. Names like the Atlanta Braves come from another time. So, in my cover, I've brought the cultural arrogance of one side back to the sixteen-hundreds and the first Thanksgiving dinner, just to see what would happen."

Thanks to the U.S. Patent Office canceling the team's trademark, McCall was able to use the official logo on the cover. It's the same reason South Park could do the same in its own hilarious satire.

Where it stands: Washington owner Dan Snyder has remained steadfast in his refusal to change the team's name despite growing protests.

The largest of those protests (so far) came earlier this month in Minnesota, where thousands of Native Americans turned out before the team played the Vikings with signs and chants like "Who are we? Not your mascots!"

A September poll found that 71% of Americans don't think Washington should change its name. But that majority is shrinking, and high-profile protests like these are part of the reason why.