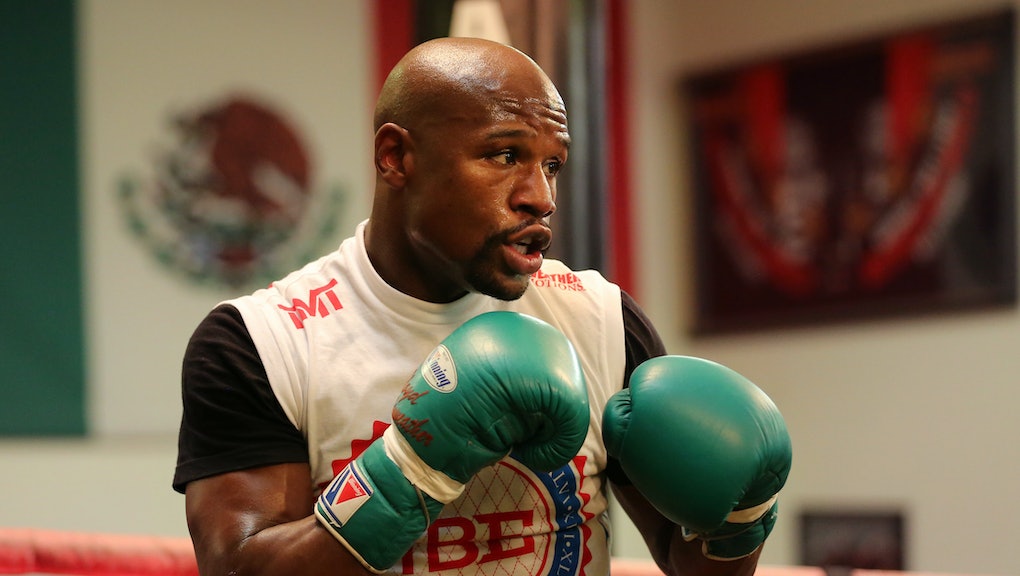 Floyd Mayweather Is A Serial Domestic Abuser — So Why Doesn't America Care?

There was Ray Rice, there was Greg Hardy and there was Jeffrey Taylor. These individuals were involved in some of the most high-profiled domestic violence in American sports. But for some reason, boxer Floyd Mayweather has been relatively free from the judicial system and unpunished by any boxing entities — yet he is far from innocent.

Earlier in 2014, Deadspin highlighted the extent of his domestic violence history noting how it "extends over a dozen years and includes at least seven separate physical assaults on five different women that resulted in arrest or citation."

In a USA Today interview, former partner and mother to three of his children, Josie Harris, discussed the unimaginable conditions she faced because of Mayweather's actions.

Harris told USA Today that she experienced physical abuse from Mayweather on six occasions, the worst coming in September of 2010.

According to Harris, this specific incident stemmed from the fact that Mayweather was upset that she was talking to an NBA player even though they had already split up at that point in time. The police report explains in detail what happened that night:

Harris awoke to Mayweather over her striking her in back of her head with a closed fist several times. Mayweather also pulled Harris['] hair and twisted her left arm.

What makes the violence of these actions even worse is that Mayweather's job is to cause bodily harm to other boxers; his trained punches cannot only be dangerous, but they could be deadly as well.

Mayweather's son Koraun and his sibling were witnesses to Mayweather's brutality. Koraun told USA Today how he had to step up to prevent his mother from being more seriously injured:

I went back into my room and locked the door and then ran back out my bathroom and then hopped over the gate and went to the main entrance gate. I just told (the guard) that my mom was getting hurt and to call the ambulance and the police.

He ended up writing a police statement, describing the situation that no kid should have to experience.

"He is a coward," Koraun Mayweather told USA Today about his own father.

Mayweather's own son, who has seen his father's aggression toward women up close and personal, believes his father is a coward for his actions, but many people don't share the same sentiments. Despite these deplorable actions, Mayweather continues to remain very much in the public spotlight and any sort of condemnation for his actions is few and far in-between.

Believe it or not, the boxer — who has gone to jail for domestic violence — presented an award at Nickelodeon's Kids' Choice Awards earlier in 2014.

Nickelodeon completely glossed over Mayweather's domestic abuse history and even prepared a skit in which Mayweather signed the face of the other presenter to the great pleasure of the heavily cheering teens and tweens filling the audience.

But the way things are looking, it's almost as though Mayweather has earned so much money and has become so powerful that he will never be held fully accountable for his actions. He has never been disciplined by the Nevada State Athletic Commission even after he was sentenced late in 2011. Nor did he face any punishment after a domestic violence lawsuit was filed in 2014, alleging Mayweather choked and pulled a gun on his ex-fiancée, Shantel Jackson.

The court of public opinion can be extremely influential, as seen by the recent outrage against Bill Cosby. But with Floyd Mayweather, that court has sadly become an extension of a failed justice system that is somehow unable to effectively deal with cases of battered women and domestic abuse, effectively freeing him from any real retribution.

As major sports stars continue to eek their way past the judicial systems, likely riding high on their large fortunes and sports-fueled famed, cases of domestic abuse may just keep coming out in worse and worse ways. For some reason, America doesn't seem to care, but it should.