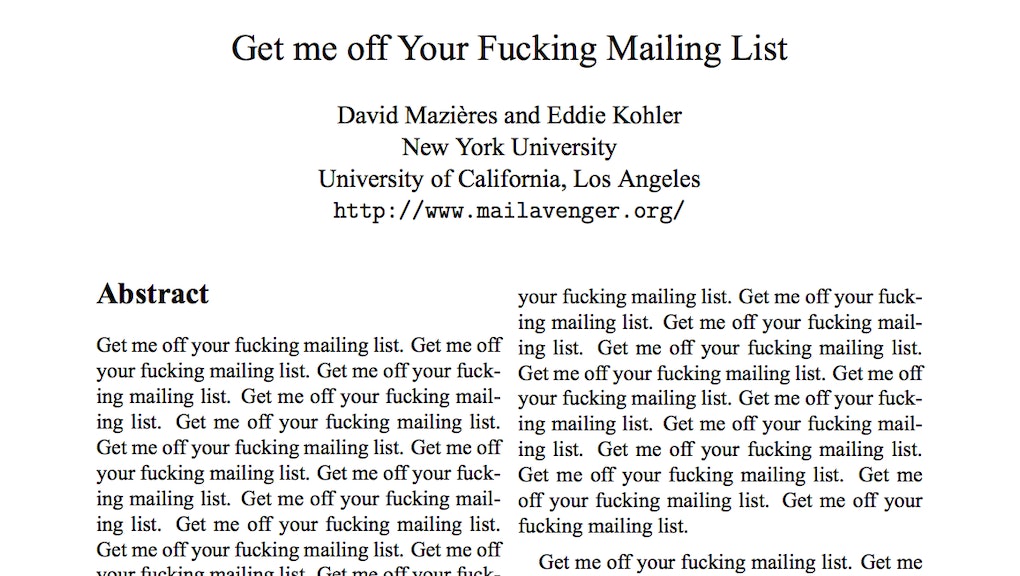 What may be the greatest science paper ever is also the easiest to understand.

It's just seven words over and over — "Get me off your fucking mailing list" — spread across headings, body text and charts, but it was just accepted by and could have been published in the International Journal of Advanced Computer Technology.

Despite its immaturity and repetition, the paper proves an important point. The journal that accepted it and others like it are low-quality scams that will post anything for a profit.

The background: The International Journal of Advanced Computer Technology and similar journals spam scientists offering to publish their work. Once an article is accepted, the journal asks for a fee.

But these articles aren't peer reviewed like they are at serious scientific journals. It's a process that preys on fledgling researchers who feel pressured to publish in order to advance their careers, sometimes at the expense of real science.

The researchers here, David Mazieres and Eddie Kohler at New York University, were cheekily responding to one such email in hopes that the journal would take a hint. Instead it prepared to publish the profane piece that no one would take seriously if they even glanced at it. Mazieres and Kohler just had to pay $150.

Not the first time: Other scientists have had fun pointing out just how useless these kind of journals are.

An Ottawa Citizen reporter submitted a nonsense paper ("Acidity and aridity: Soil inorganic carbon storage exhibits complex relationship with low-pH soils and myeloablation followed by autologous PBSC infusion") that was quickly accepted by eight journals, all of which wanted anywhere from $1,000 to $5,000 from him to publish it.

Another reporter, working with legitimate journal Science, sent a bullshit article about cancer-fighting lichens out to hundreds of journals; 60% of them accepted it.

The "Get me off your fucking mailing list" article is the worst of the bunch, of course, because it doesn't even take a science hobbyist to realize that it does not merit publishing. But as long as there are stressed out researchers, there will be journals looking to profit.

Correction: Nov. 22, 2014 An earlier version of this article said that the International Journal of Advanced Computer Technology had published the article. The authors decided not to pay the $150 fee to see it published.