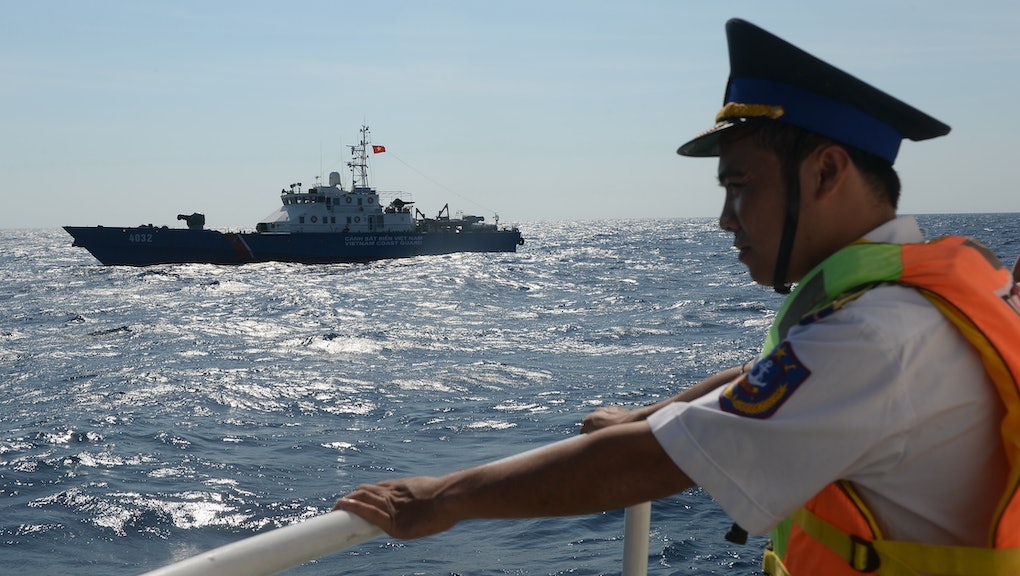 China Looks to Be Building a Huge Military Base in the Sea, and It's Raising Eyebrows

According to reports and new satellite images, China appears to be building on a very large island in a disputed sea region that could be the precursor to major tension in Asia.

The island, captured in the satellite images, sits on a reef near the Spratly Islands in the South China Sea. Territory in the area has been claimed by Taiwan, Malaysia, the Philippines, Vietnam and Brunei in addition to China, according to Reuters, making this a sizable incursion with potentially major implications.

While China's building on a island in this region might only be minor cause for concern, the sheer size of this island is raising red flags. According to military publication IHS Jane's, it's "large enough to construct a runway" and includes a harbor that "appear[s] to be large enough to receive tankers and major surface combatants."

In other words, China may have just started construction on a major military base in a hotly contested and sometimes conflict-embroiled part of the sea.

The background: While it may not seem like much, the land in question is rich in minerals and could be of strategic value for any of the countries claiming ownership.

The United States has called for an end to "provocative activity" in the South China Sea until the countries meet and figure out how best to deal with the situation, according to Reuters. China, predictably, is not interested in listening to the United States.

That's partially because the other countries involved already have airfields built on islands and reefs nearby. So what seems like a military escalation to the rest of the countries may just be keeping up with the Joneses for China.

Previous incidents: This isn't the first time China has irked neighbors with its claims in the region.

Earlier this year, China built a $1 billion rig that began drilling for oil in waters Vietnam had claimed. That set off protests by Vietnamese citizens who rallied outside the Chinese embassy with signs like "Silence is cowardly" and "China don't steal our oil."

Because so many of these countries rely on China for trade purposes, it can be hard to stand up to the neighborhood behemoth. But that didn't stop Vietnam and the Philippines from partnering their navies to throw a beach party on part of the Spratly Islands as a sort of "screw you" to China.

Hopefully the response tends more toward partying than toward military buildup. Either way, you can bet the United States is keeping a close eye on whatever's coming next.