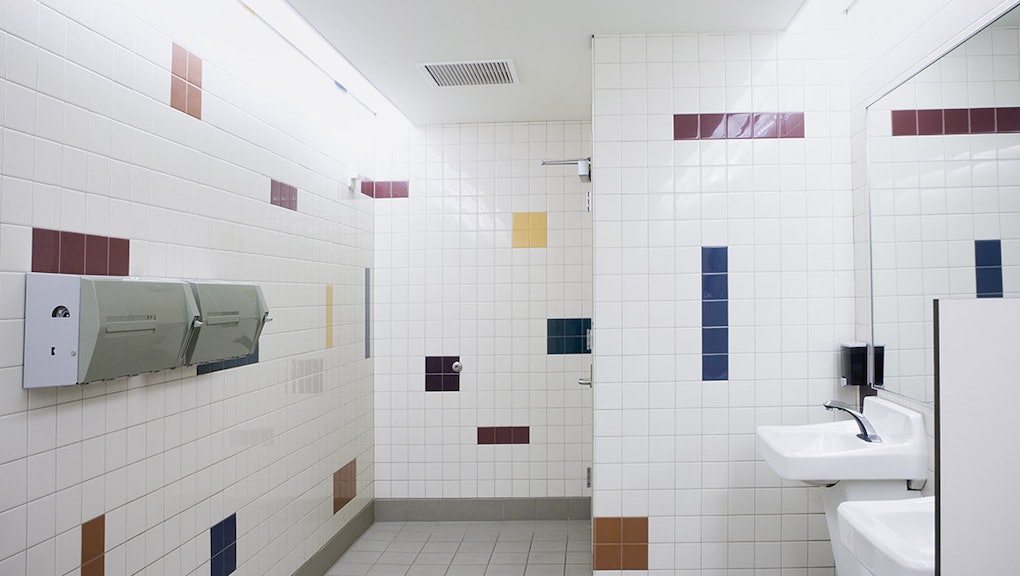 One Image Shows Just How Gross Bathroom Hand Dryers Can Be

If you prefer hand dryers to paper towels, you might not like what you're about to see.

That's how germs spread when you dry your hands in a public restroom, according to a new study published in the Journal of Hospital Infection. Paper towels, the study concluded, are a far superior option.

How it worked: Researchers at the University of Leeds put paint on subjects' hands and then had them clean up using different commonly found drying methods. The splotch you can see in the photo shows how far paint droplets traveled under the standard dryer — meaning that if someone doesn't wash their hands correctly, that's where germs could end up after they dry.

According to the study, nearby air bacteria counts were 27 times higher when using a jet air dryer than when using paper towels. That result held for distances as far as one meter away from the drying process.

"Jet air and warm air dryers result in increased bacterial aerosolization when drying hands," the study concluded. "These results suggest that air dryers may be unsuitable for use in healthcare settings, as they may facilitate microbial cross-contamination via airborne dissemination to the environment or bathroom visitors."

The eternal debate: It's another victory for paper towels in the struggle for bathroom supremacy. About 80% of infectious diseases are spread with hands, so picking the right method is actually pretty important (especially in hospitals and other areas with lots of sick people).

If everyone washed their hands properly, it wouldn't be as big a deal. But we are impatient and imperfect, which can lead to problems. Paper towels take only about 10 seconds to dry our hands, according to AsapSCIENCE, compared to 45 seconds for air dryers. People are more likely to cut out early with dryers, wiping their hands on their pants or just using the door handle with wet hands. Your gross jeans and the even grosser bathroom door can serve to undo all the washing you just did. And if that doesn't convince you, maybe TV's favorite science nerds will:

So if given a choice the next time you're in a public bathroom, take the paper towels. And if an air dryer is all that's available, just stick it out and avoid using your pants.