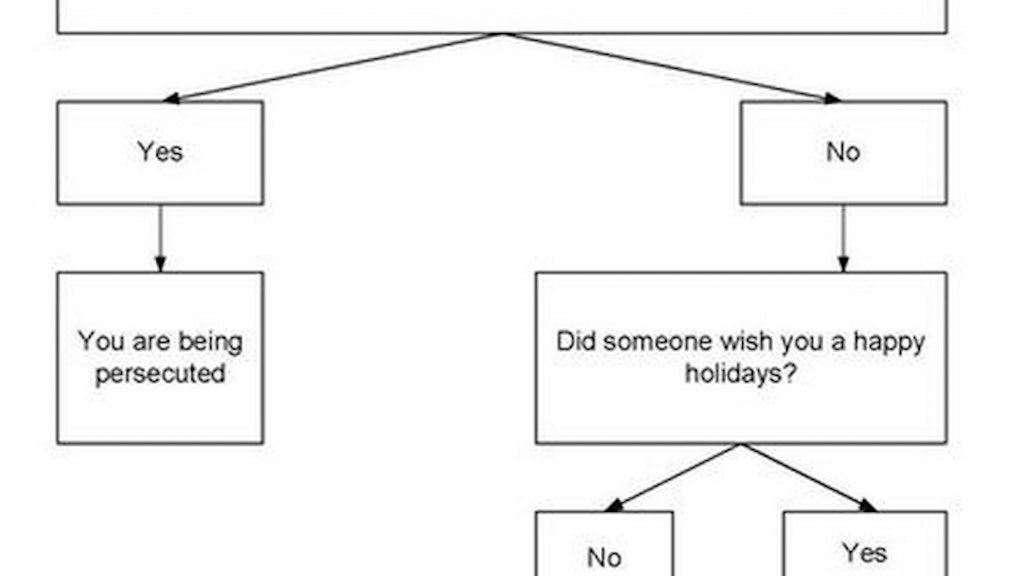 Are You Being Persecuted as Part of the 'War on Christmas'? Check This Chart

Have you seen a menorah or a kinara in the vicinity of a Christmas tree? If you believe such slights constitute a crime against the against the sacrosanct, in-no-way-commercialized holiday that is Christmas, this chart is for you.

Rachel Held Evans, a Christian blogger, put the chart together to serve as a friendly reminder for that pesky question that inevitably seems to come up every year — thanks in part to people like Kirk Cameron, the American Family Association and the hosts of Fox News.

No laughing matter: Even though the chart skewers the idea of the "War on Christmas" in hilarious fashion, this shouldn't overshadow the fact that we live in a society where such a chart has to exist in the first place.

Almost 80% of adults in the United States identify as Christian. Being part of such an overwhelming majority and still claiming persecution just because someone else dared to celebrate their own religion, or doesn't necessarily want to agree with every part of yours, is asinine, ignorant and possibly even disregards every American's basic right to religious freedom as outlined in the First Amendment. Plus, complaining about these kinds of issues belittles the real religious persecution that many non-Christian Americans face and that many Christians in other parts of the world regularly endure.

The "War on Christmas" is as real as Santa Claus, so stop believing in it.