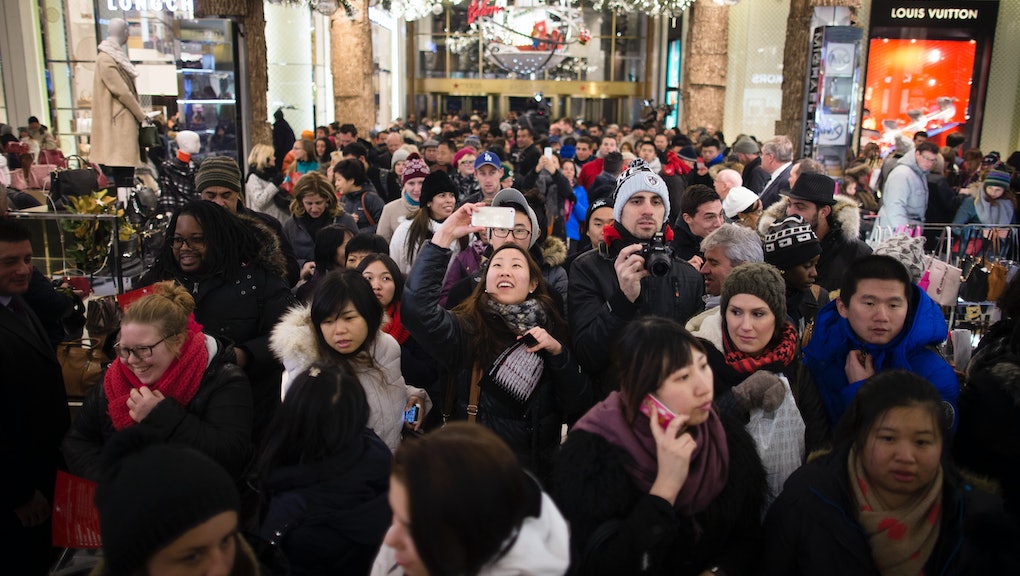 The Definitive List of Stores That Refuse to Open on Thanksgiving

Thanksgiving should be a time for family, food and merriment. For some retail workers, however, it has turned into a slow march toward materialism-induced doom as stores begin requiring employees to come in on Thanksgiving in order to pad profits and better prepare for Black Friday.

The tactic has become so common that it even has a name: Grey Thursday. Given the attitude of workers required to report to work for a hellish shift full of stampedes, violence and parents with crying children the name is more than apt.

Thankfully, some stores won't partake in this misery. While cynics may call advertising a decision to remain closed on a national holiday a promotional scheme, these retailers are saving their workers the early hours of their peers at Walmart and Macy's.

In the interest of making your holiday shopping choices a little bit more conscionable, Mic has compiled the following list of employee-friendly retailers:

The company has a well-documented history of treating its employees like actual people. As for why they're remaining closed on Turkey Day, the company told ThinkProgress, "Our employees work especially hard during the holiday season, and we simply believe that they deserve the opportunity to spend Thanksgiving with their families. Nothing more complicated than that."

The company will keep with tradition and keep its doors closed on the holiday. In 2013, a company spokesman told the Huffington Post, "This goes back as long as anybody here can remember. Over the years we've heard a lot from our customers, and they appreciate that we take this approach." This year, the chain told ThinkProgress that they're closing up shop because "we believe in celebrating one holiday at a time."

Forbes included the college student's dorm room savior on their list of closed stores; Mic has reached out for confirmation and will update if and when that's recieved.

The gaming chain takes a family-oriented approach to the holiday season. "At GameStop we often use the phrase 'protect the family' in reference to our business," they told Daily Finance. "A large part of what that means to us is to not open any of our GameStop, SimplyMac, Spring Mobile or Cricket Wireless U.S. locations on Thanksgiving Day out of respect for our store associates and their families and friends. We believe it's the right decision not only for our employees but also for our customers."

The outdoor clothing chain had a pithy response when questioned about Thanksgiving: "It's a holiday – we're closed!"

According to Forbes, the craft retailer is on the list of companies closed this Thursday. We've contacted them for confirmation, and will report back if we receive comment.

These stores are all owned by TJX, which means they'll all be closed on Thanksgiving. "We consider ourselves an Associate-friendly Company, and, we are pleased to give our Associates the time to enjoy the Thanksgiving holiday with family and friends," a company spokeswoman told ThinkProgress.

In an email to Mic, a company spokeswoman noted that "All REI stores will be closed on Thanksgiving so that employees can spent time with their loved ones. We reopen on Friday morning at 8 a.m."

Like many of the other companies, Burlington Coat Factory stressed that they're a family-first chain when it comes to the holidays. "All Burlington locations will remain closed on Thanksgiving so that our associates and customers can spend the special holiday with their loved ones," a representative told ThinkProgress.

Forbes confirmed that Talbots would be closed on Thursday; we've reached out for comment and will update if we hear back.

"We hope our associates enjoy the time with family and friends," a company representative told ThinkProgress.

Another company with a "family first" line of thinking: "We choose to remain closed on Thanksgiving in longstanding tradition of honoring of our customers' and associates' time with family," a representative said.

The Washington Post reported that your dog's shopping oasis will be closed on Thanksgiving this year. We've reached out for comment, and will update if we hear back.

Despite its unfortunate reputation for curtailing womens' rights, Hobby Lobby has at least one thing going for it this year. "We believe the success of our company is directly attributable to the hard work and dedication of our employees, and [closing on Thanksgiving] is just one way that we're able to reward them for that," read the company's statement.

As Florida Today reported, the supermarket's decision to remain closed "reflects the company's commitment to family values." The company took the same route in 2011.

A representative for the chain went with a simpler explanation — it was "what members and management wanted," according to the City Wire.

According to a tweet posted to the company's Twitter account, Home Depot wants its employees to "take time to enjoy food, family and friends" on Thanksgiving this year.

Lowe's is another company following tradition. "Lowe's has been in business since the 1940s and traditionally closes on Thanksgiving Day and Christmas Day. Closing on Thanksgiving Day 2014 is consistent with the past years," Karen Cobb, corporate public relations manager, Mic.

"Sur La Table will not be opening its retail locations and cooking class programs on Thanksgiving Day," Jeff Gottlieb, executive vice president of retail, said in a statement to Mic. "Our people share a passion for cooking and entertaining with our customers on a daily basis. We want to make sure they can share that same passion with friends and family on the biggest cooking and entertaining Holiday of the year."

Mental Floss wrote that they'll be closed, and we've reached out for comment to confirm.

According to its website, the company "will be closed Thanksgiving Day, November 27 so that our booksellers can be with their family and friends. We will re-open on Friday, November 28."

"Virtually all" of the chain's stores will be closed, a spokeswoman told ThinkProgress, "despite increasing pressure."

Sorry, kids — you'll have to wait a day longer for your American Girl dolls. "Our stores have never been open on Thanksgiving, so this is not a new decision for us," a spokeswoman told the Huffington Post.

In 2011, the company posted on Facebook that they were closed on Thanksgiving. As Mental Floss noted, the company has bucked the trend for quite some time and have traditionally stayed closed.