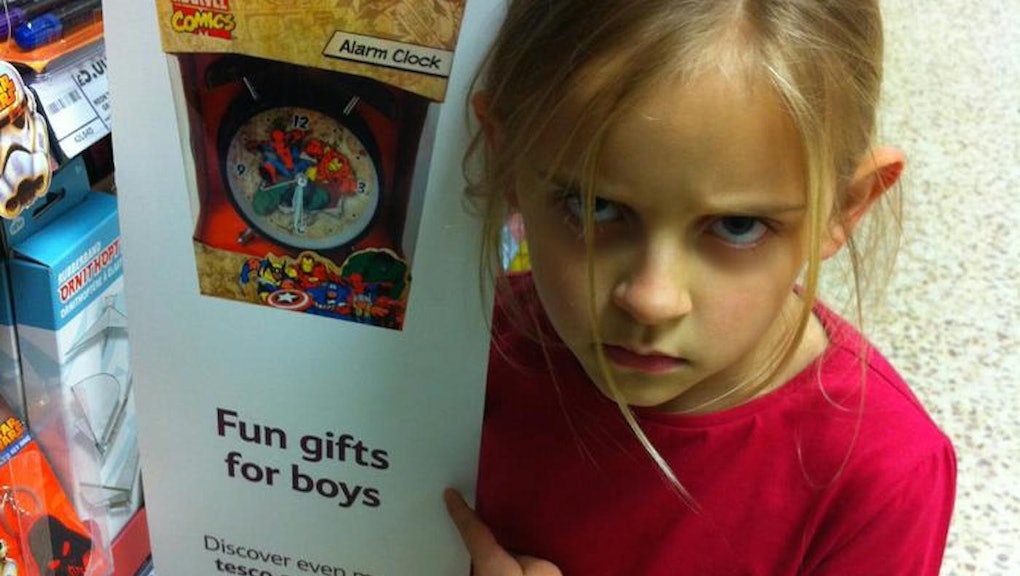 Hell hath no fury like a kid who can point out sexist marketing.

Maggie Cole, a 7-year-old with an eye for gender stereotyping, was not pleased when she came across a certain sign in Tesco.

Maggie's mother, Karen, tells BuzzFeed that her daughter spotted the sign before she did and exclaimed something along the lines of, "Well that's wrong! Anybody can like superheroes, they're being stupid aren't they?"

The spunky gal's mom also says that Maggie is a fan of Batman, Superman, Spider-Man and Wonder Woman and loves The Flash television series. She also likes hanging out with dragons, reading about World War II and even asked for a cemetery birthday cake. On top of that, Maggie isn't afraid to call out the sexism she's becoming aware of. And to that end, Maggie has a thought that everyone should keep in mind: "I can like what I want."

Tesco could learn something from Lego, whose recently unearthed 1974 letter to parents reminded them that the urge to create is equally strong in boys and girls. The problems of gender stereotypes in toys have thankfully received more attention lately, with the backlash against female warrior Gamora being left out of Guardians of the Galaxy merchandise to a sexist Barbie book on computer engineering.

From action figures to doll houses, toys are a vital part of children's development, and promoting these outdated stereotypes could be dangerous. By coding playthings with what's expected of boys and girls and furthering the process with selective marketing, like the Tesco sign, it's irresponsibly telling kids what they need to be or like. As Lego voices, let youngsters do what feels right to them.