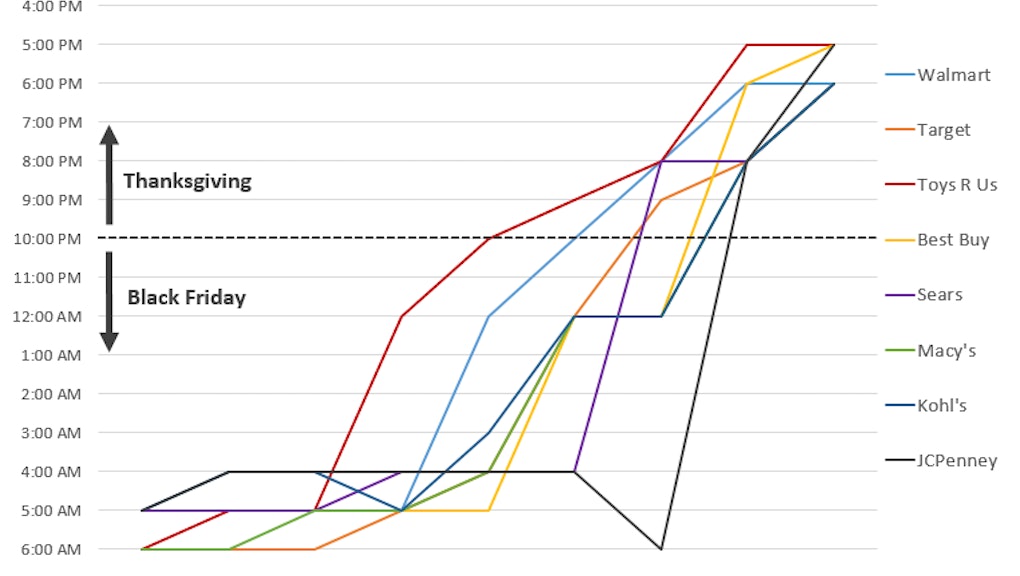 How Major Corporations Are Killing Thanksgiving, in One Chart

Thanksgiving, a holiday meant to celebrate the bounties of life and foster gratefulness for what we have, is is steadily being transformed into an occasion for wanting more.

Black Friday, the day major retailers offer special deals to signal the beginning of the holiday shopping season, has seeped further into Thanksgiving Day itself over the past several years. Desperate to edge each other out in a store-opening arms race, corporations have unabashedly turned America's most cherished secular holiday into an altar of consumerism.

"Black Friday" is no longer an accurate way to describe how retailers capitalize on the holiday to stoke Americans' appetite for shopping. In 2007, the average store open time was 5:16 a.m. on Black Friday; this year, it's 5:43 p.m on Thanksgiving.

The chart below shows how the opening times for several major retailers has creeped earlier into Thanksgiving. The higher up the chart, the earlier the time the store opened in a given year, indicated along the bottom. As you can see, every store is opening earlier this year or at the same time as last year:

An executive at Walmart — whose "New Black Friday" this year is five days long — recently joked to the Wall Street Journal that Black Friday should be renamed "November."

A dark tradition: The holiday season is the busiest time of year for retailers, and more time for shopping prior to Christmas Day means more revenue. (In fact, the date we celebrate Thanksgiving was once made earlier by Franklin Roosevelt when he came under the pressure of big business to make sure it maximized the length of the holiday shopping season.)

In recent years, Black Friday has become an ugly affair. In response to the escalating chaos of store openings, the U.S. Occupational Health and Safety Administration advised stores to staff their entrances with uniformed guards and monitor objects that could be used as projectiles, as the New Yorker notes. People have been injured and trampled to death during the opening stampedes.

Why is Black Friday colonizing Thanksgiving? Desperation. The rise of Internet shopping has diluted the power of Black Friday. The Boston Globe reports that sales in 2013 were down 14% from just two years earlier, despite a great increase in advertising for special deals. By making Black Friday earlier, longer and more convenient, companies hope to capture some of the shoppers more reluctant to make the plunge on Friday and increasingly inclined to shop in their pajamas on Cyber Monday.

The power of shame: Giant corporations will pursue profit ruthlessly, but not at any cost. Some companies are deliberately closing on Thanksgiving to brand themselves as humane and family friendly. Setting aside the sincerity of these retailers, many of whom could be paying their workers more, giving them better schedules or allowing for more freedom in the workplace, the corporate sector is becoming increasingly concerned with the reputation they hold among consumers. Ethical consumption is becoming a more important element of American's lives as the channels of information that allow us to scrutinize how companies conduct themselves continue to blossom.

Lovers of Thanksgiving might do their working friends a favor by waiting until after all the madness passes to go shopping. And if feeling particularly lively, join some protests so that next year they can enjoy dinner like the rest of us.