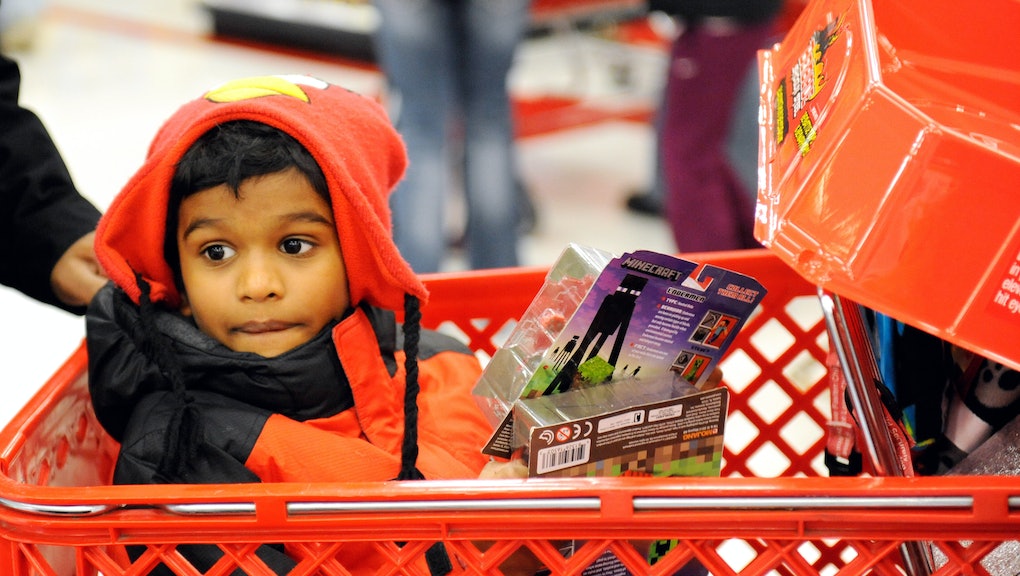 7 Reasons You Should Definitely Stay Home on Black Friday

Between the sketchy deals, the burned-out sales staff and the nervous cops hoping the general air of agitation doesn't spill over into physical violence, Black Friday seems like a worse idea every year.

But 28% of Americans are still willing to brave the Wild West of shopping to grab a snazzy new TV or a pile of discount toys, meaning the "holiday" is still worth billions of dollars in consumer spending. If you're planning to go out and spend the day after Thanksgiving, here are seven reasons you should consider staying home instead.

1. Surprisingly, the deals are actually not good.

The worst-kept secret about Black Friday is that aside from a few limited-availability doorbusters, the deals are not actually very good. Computer scientist Oren Etzioni, an artificial intelligence writer, used a complex algorithm to analyze the price tags of billions of consumer products and discovered the best bargains aren't even available until early December.

"The bottom line is, Black Friday is for the retailers to go from the red into the black," he told the New York Times. "It's not really for people to get great deals on the most popular products."

Another analysis by Adobe Systems concluded that the Monday before Thanksgiving actually boasts the best savings.

Often the quality of the highest-discounted items is suspect. As Digital Trends warns, "cheap crap is cheap crap" no matter how big the discount looks. Most doorbusters are off-brand merchandise.

Additionally, most stores even repeat the same deals year after year. NerdWallet looked at 27 Black Friday advertisements from major retailers and found that 93% listed one product at the same price the item was listed for the previous Black Friday. That 60%-off sweater was only worth the discount price in the first place, if it's even worth that much.

In addition to being way more convenient, the discounts available online generally match those found in-person at the store. Online sales don't face the same stocking issues that regular retailers might run into, and there's no crowds, lines or holiday traffic. Unless you're trying to get a specific doorbuster, going to stores in person might be pointless frustration.

The endless expansion of Black Friday into Thanksgiving is taking a toll on retail workers, who are often forced to miss out on holiday time with their families to deal with hordes of shoppers. At least 10 companies will open by 6 p.m. on Thanksgiving this year, including Kmart, which will be open for 42 hours straight beginning at 6 a.m. on Thanksgiving.

Despite being asked to work incredibly hard over the holiday season, retail workers generally make very little money. Disgruntled Walmart workers plan to strike outside 1,600 separate stores on Black Friday to demand higher wages. Some Walmart employees even say they're not making enough to feed themselves, reports the Washington Post:

"It hurts to talk about being that hungry," said Martha Sellers, who has worked at a store in Pico Rivera, California, for 11 years, on a conference call with reporters Friday. She says when she was feeling lightheaded at work from having not eaten, a manager asked her if she was hungover. "Hungover from starvation? How do you answer that to a manager who won't give you enough hours or pay you enough?"

4. You probably can't afford it.

Undoubtedly, middle-class spending drives the economy, but families making under $100,000 a year take an average of two to three months to pay off their holiday credit card debt. Nearly 40% of Americans feel pressured to overspend during the holiday season, and Black Friday is the biggest money sink of all.

"Those who spend more in an effort to 'keep up' end up paying the price later," NerdWallet senior retail analyst Matthew Ong writes. "Middle-class households could end up in a risky position this holiday season if they have ample credit to make purchases but incomes too thin to comfortably pay the bills later."

It's definitely possible to save lots of money capitalizing on Black Friday deals, but considering it's just one day out of many featuring pre-holiday sales, that's not much of an argument in favor of Black Friday specifically. Going out in person also dramatically increases the chances of impulse buying, and about half of people who buy an in-store credit card during the holiday season end up regretting it.

5. If you stay home, you won't get trampled.

If you do brave the Black Friday crowds, your chances of actually getting trampled are pretty low. But with frenzied crowds roaring to get into stores, it's safe to say your chances of getting stepped on or otherwise shoved around are dramatically higher at the mall than your house.

A study by Blistex found that 63% of shoppers experienced "aches and pains" during an "intense day of shopping," probably from the combined discomforts of carrying heavy packages and navigating through crowds of their overenthusiastic brethren. Another recent survey found that 73% of shoppers find Black Friday frustrating and overwhelming, with lines and crowds the top complaints.

6. You won't get shot, stabbed or maced over a TV, either.

The Black Friday Death Count tallies up media reports of deaths or serious injuries caused during Black Friday, which range from shootings and robberies to mass-macing of angry shoppers by police. Since 2006, there have been seven documented deaths and 90 injuries.

On top of that, retail crime rises 30% during the holiday season. Luckily, some of the violence died down last year thanks to fewer shoppers and longer holiday hours at stores. But you could still be the lucky winner that gets stabbed over a flatscreen 4K.

7. It's a holiday for corporations, not consumers.

Black Friday isn't a holiday. It isn't even the busiest shopping day of the year (which is typically the Saturday before Christmas). It's an excuse for retailers to offload as much merchandise as possible and drive families to stores after Thanksgiving. In exchange for a few cheap loss leaders, consumers spend countless hours in traffic, in line or camping out.

As the Onion is fond of reminding us, Black Friday is a holiday for corporations, not consumers.

It may not even be a good use of your time. "I will say the whole notion of 'opportunity cost' is maybe one of the most helpful hints from economics that you could possibly use," University of Pennsylvania marketing professor Stephen Hoch told AllThingsD. "If you just recognize that you can substitute different activities across time, then you start to look at something like Black Friday differently. Just because you're not being paid at that second, doesn't mean that time doesn't have value to you."

Research has also backed the hypothesis that spending doesn't make people happy except in the extreme short term, meaning you'll probably be dealing with those back-aches longer than you'll be grinning over your new laptop.

"With Internet shopping, problems like lines, crowds and wearing pants are bygone nuisances," Black Friday Death Count creator Travis Dent tells AdWeek. "Why would anyone risk a midnight pepper-spray attack from a mall cop when they can let warehouse robots do it for them?"

According to most analysts, Black Friday is dying anyhow. So now would be an ample opportunity to give it a quiet funeral.