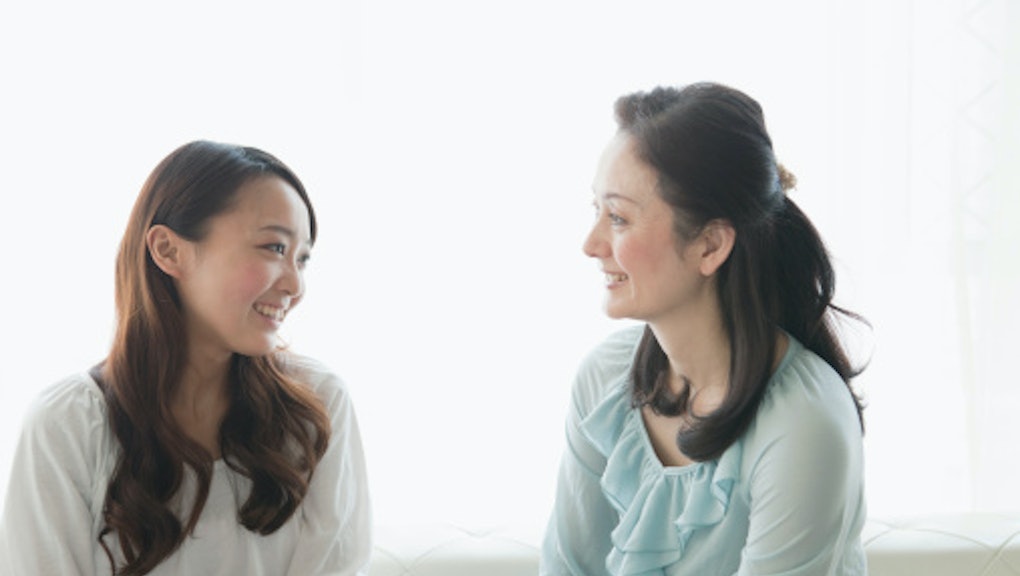 The Sex Talk Every Mother Should Have With Her Daughter

It's no exaggeration that sex is everywhere.

Long gone are the days of teenagers having to sneak peeks at the pages of risqué magazines during school recess. And professionals no longer have to mine obscure corners of the Internet to find explicit content at work.

Just being alive and aware probably means you know what sex is in today's sexually saturated pop culture, and no group is more aware of its burgeoning sexuality than the youth. According to the Guttmacher Institute, the average American teen has sex for the first time at age 17, but 16% of teens have had sex by age 15.

But unfortunately, while sexual mores are generally loosening, those coming of age today are entering a dangerous new universe where less than half of Americans report being sexually satisfied, slut-shaming is becoming more prevalent in our schools and social networks, and close to 18 million women are estimated to be sexual assault victims. These problems, which are pervasive and complex, can't be fixed with a single, catch-all remedy. Rather, we must address them by instigating a cultural shift in how we talk about sex — specifically with young girls — as they form healthy sexual and sensual relationships and make informed decisions related to their sexual health.

The perfect place to approach these topics is in the sex talk mothers have (we hope!) with their daughters. It's time to move beyond stretching a condom over a banana and discuss sex for what it really is: a deeply personal, significant and politicized act that means something different to everyone but is universally significant.

With that in mind, here's what the mother-daughter sex talk should include in 2014.

Nobody has the right to touch you without your explicit consent.

Becoming sexually active can be confusing and overwhelming, but there's one thing that should never be up for debate: consent. Explicit consent from both partners is a must and should be the starting point of any sexual contact.

You aren't a slut if you have sex.

This bears repeating: being sexually active does not make you a slut. In fact, nothing makes you a slut because, as one woman's experiment showed, the very concept is nothing more than a linguistic tactic employed to police female sexuality.

And there's nothing wrong with you if you don't have sex.

On average, U.S. females lose their virginity when they're 17. But if you haven't had sex by the time high school draws to a close, that's OK! There is no right or wrong age to lose your virginity — so long as it's consensual sex — so don't compare yourself to your peers or cave to pressure.

There are many reasons why women fake the "big O," but doing so may do more harm than good in the long run.

As Talia Baurer, a sex columnist for the Wesleyan Argus, explained to Huffington Post, "It is damaging. When you orgasm, when you fake orgasm, you're communicating very clearly to you partner that what they're doing is right. If it's not working for you and it's not giving you an orgasm and that's what you want, then it's really not fair."

So please, invest in your sexual happiness and don't fake orgasms. Honesty is always the best policy.

Condoms are your first line of defense against sexually transmitted infections, HIV and pregnancy, if worn correctly. But male condoms aren't the only barrier method of birth control available. When it comes to preventing pregnancy, there are other options to suit individual needs and preferences, including female condoms, cervical caps and spermicide.

In addition to protecting your health, practicing safe sex can make for better sex. As I previously wrote, "If you aren't preoccupied and worried about being protected, you can focus your energy on you and your partner's pleasure."

Above all, respect yourself.

This can't be emphasized enough: Don't cave to peer pressure. What matters most is not who is or isn't doing it, or who thinks you should or shouldn't be doing it, but how you feel about an intimate act.

Ask yourself if you feel comfortable with this person and particular act. If the answer isn't immediately a resounding "yes," then respect yourself and don't do it.

Healthy sex lives and self-esteem have their foundations in open, honest conversations with trusted adults in welcoming environments. Let's do our girls a favor and jump-start the discussion. They'll thank us for a long time to come.