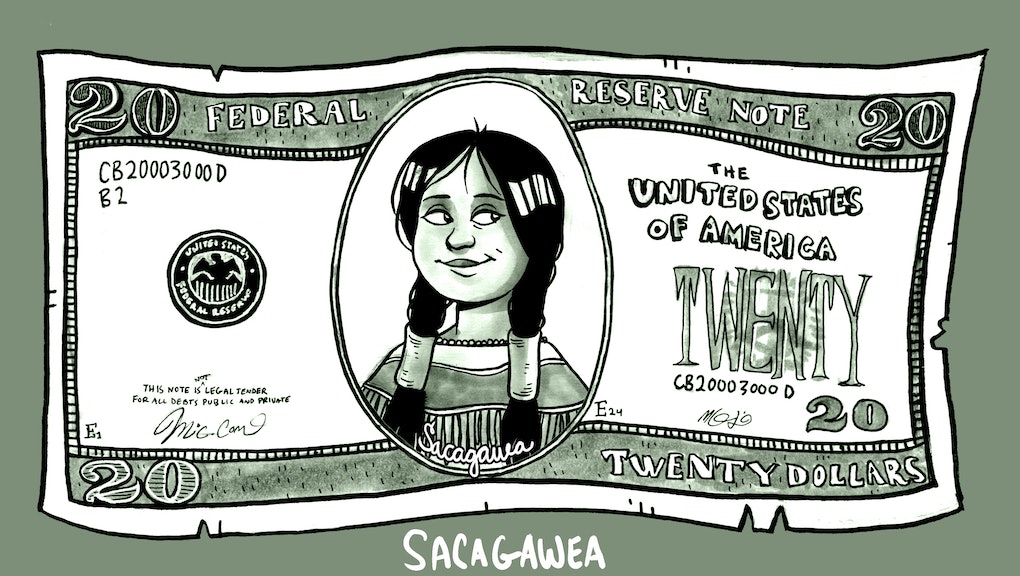 Let's not mince words: Andrew Jackson presided over one of the largest genocides of Native Americans. So why do we continue to honor the former president's memory daily?

Despite Jackson's role in enforcing the mass removal of Native Americans across the country, the face of our nation's seventh president continues to grace the face of the ubiquitous $20. But it is also the reason why there is a burgeoning campaign to remove him. As Americans across the country recover from a weekend of overindulgence and overly romanticized stories of the first Thanksgiving, Mic cartoonist Mady G. has created a few alternate versions of the currency that pay homage to a dramatically underrepresented — and arguably more authentic — group of American leaders.

The son of immigrants, Jackson became president at the age of 70 after amassing his wealth as a slave trader in the South, east of the Mississippi. In fact, Slate's Jillian Keenan wrote, during the early years of his presidency, Jackson "pursued his 'Indian Removal' policies specifically so that the stolen lands could be used to expand cotton farming and slavery."

Indeed, Jackson's Indian Removal Act of 1830 expelled over 46,000 Native Americans from their homeland in the South. No wonder natives nicknamed Jackson "Sharp Knife." He was ruthless. The "Trail of Tears" is the name given to this forced removal and the 4,000-plus natives who died during this migration, PBS notes, due to "cold, hunger and disease."

Keenan argues that Jackson should no longer be considered a symbol of America. "By confronting and correcting the symbols of our violent and racist histories, we prompt conversations about how that legacy continues to affect marginalized communities today," Keenan wrote. Perhaps the irony of ironies, Keenan observes, is that Jackson himself hated paper money and would arguably be the loudest advocate for his replacement.

Even more ironic is the fact that Pocahontas was the face of the $20 bill in 1863, only to be replaced four years later by Alexander Hamilton and, after a handful of others, that of Jackson in 1928.

Of course, there is a long history of erasure and whitewashing in American history, a legacy that is exemplified by those represented on U.S. currency. Currently, three women have their portraits emblazoned on U.S. Department of Treasure coins, but no women currently grace any bills. No African-American or other minority has never been selected for the honor.

In England, British feminists campaigned the Bank of England to put a woman on a national bank note, a campaign that ultimately resulted in public harassment and even death threats for its leader, Caroline Criado-Perez. Meanwhile, President Obama in July garnered headlines for his positive, if vague, response to a young girl's letter asking that he consider women for American bills.

"And then she gave me like a long list of possible women to put on our dollar bills and quarters and stuff, which I thought was a pretty good idea," Obama said, according to CNN.

Clearly, there is a strong desire for a national discussion on the topic. But a lot that needs to happen before a "good idea" makes it to the heavily guarded printing presses of the Bureau of Engraving and Printing.

"Treasury Department records do not reveal the reason that portraits of these particular statesmen were chosen in preference to those of other persons of equal importance and prominence," states the Treasury website. "By law, only the portrait of a deceased individual may appear on U.S. currency and securities. Specifics concerning this law may be found under United States Code, Title 31, Section 5114(b)."

In the spirit of 1863, then, as well as in the spirit of making a transparent, symbolic change to represent the sea change in attitude toward the Native American communities that built the foundation of America, maybe it's time we push the conversation forward.

While it might seem relatively trivial, breaking the white male stranglehold on American currency serves a discernible, worthwhile purpose.

"We are shaped and guided by the stories we tell ourselves from our past," noted the Week's Elissa Strauss back in August. "Educators have worked hard to incorporate more stories about women into history books over the last quarter century. This has been great; but there is symbolic, even subliminal, value to having women on money that history classes can't compete with. Seeing a woman's face on the front of a bill would create a strong associative bridge to one of the biggest emblems of power there is."