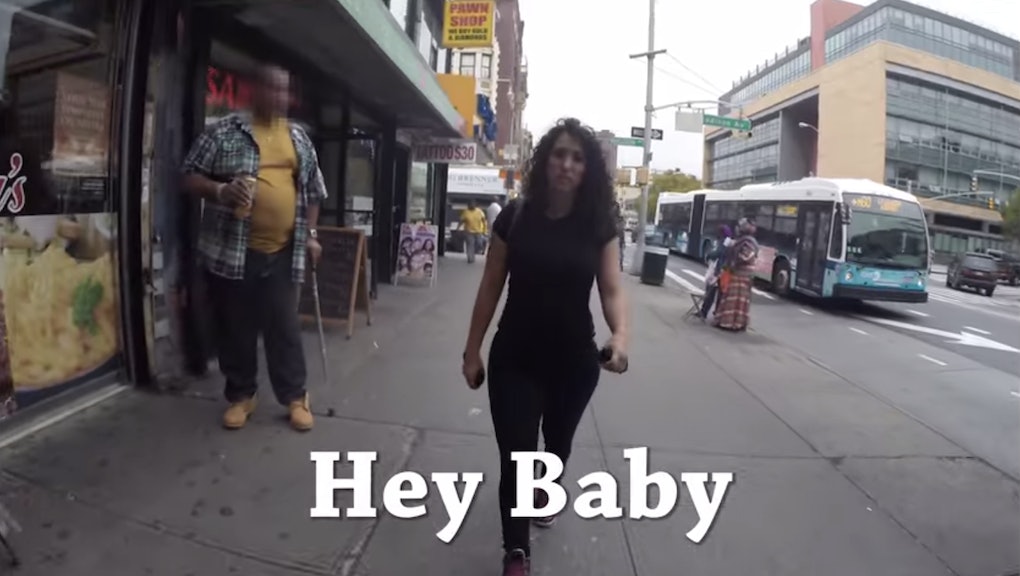 The Big Problem With All of Those Viral ‘Social Experiment’ Videos

The Internet's latest viral fad has a big problem.

They've been plastered all over the Internet lately: viral 'social experiment' videos designed to capture the Internet's fickle attention and shine the spotlight on troubling issues faced every day.

Ever since a video of a woman being catcalled for 10 hours on the streets of New York went viral in October, the Internet has seen an explosion of similar videos, capturing everything from catcalling to drunk girls being taken advantage of by strange men.

Drawing attention to an issue usually isn't a bad thing. Viral videos can start conversations, and 'gotcha' moments caught on tape reveal issues that often fly under the radar, like homophobia, sexism, racism and misogyny.

But this particular slew of videos is an exception, creating problems rather than solving them. Their troubling distortions end up drawing attention away from the issues they're meant to spotlight, and that's a big problem.

How it began: A woman clad in a T-shirt and jeans walked around New York City for 10 hours while being secretly filmed as a way to highlight the street harassment women face daily. Over the course of the day, the woman gets upward of 100 catcalls. Comments range from "beautiful" and "God bless you" to men following and harassing the woman for not acknowledging their unwanted advances.

Although the girl featured is an actress, the video was not staged. The filmmaker, Rob Bliss, wanted to shed light on street harassment by offering an "'unbiased' look at what many women experience on a daily basis." The video is a presentation of a day in the life of a woman in New York — the fact that it's real makes it as powerful as it is. Since being posted, the video has been viewed tens of millions of times and sparked a vibrant conversation about street harassment.

This is the "purest" example of viral video activism: Although some have criticized editing for disproportionately focusing on reactions from people of color, the video did not have any particularly defined messaging, advertising, commentary or emotional overtones.

The next video: A couple of weeks later, another video followed in its footsteps, featuring a social experiment in which a woman, pretending to be drunk, met men who apparently tried to take advantage of her by luring her back to their apartments while she asked for directions to a bus.

But news soonafter surfaced that the video was entirely staged. The video's creator, marketer Stephan Zang, had "solicited men to participate in the shooting of the video," but the guys and the "drunk" girl were all just acting. Viewers expressed outrage, and both the male actors and the woman expressed concerns over how their acting was being passed off as reality.

There are a few problems here: There was a complete lack of transparency in the video-making process, and the ethics behind spinning a fictional film as reality were questionable. Both issues undermined any message the film may have had. Viewers weren't talking about questionable interactions cultivated by our drinking culture; they were talking about the fact that the video was a fraud. In the end, the video's flaws gained more of the spotlight than the issue ever did.

The viral video strikes again: We saw the same pernicious logic in action last week in a new video in which a "gay" man is harassed and demeaned over 50 times while walking the streets of New York City for three hours.

The video isn't totally authentic. The featured actor is a straight man dressed "as a gay man" — a portrayal decried as problematic. But what is real about the video is the harassment it highlights. Staged or unstaged, for the purpose of fame or awareness, the video still effectively captures the atrocious comments hurled at people for their sexuality and manner of dress.

But the video is undermined by its lack of authenticity and the video-maker's attempt to boost his fame and his number of views — at the end of the video, he throws in an advertisement for his YouTube channel. It's less about an issue and more about latching on to a hot trend of viral activism.

And that's a big problem. All of the issues highlighted in these videos are very real, and they capture some sense of what people face in their daily lives. That reality makes the falseness of these videos all the more absurd.

For people to be fully invested in solving an issue, they need to believe that it's real and prevalent. These videos have staying power because they allow people to see a major social problem 'with their own eyes.' But that belief is hard to establish when viewers feel that they can't trust the information being presented to them and, moreover, when they are being flat-out duped by a scenario that's presented as a snapshot of reality but isn't.

Unfortunately, this phenomenon of well-intentioned viral videos undermining their own causes isn't anything new. Just take Kony 2012, the viral video made by the nonprofit group Invisible Children. It was intended to call international attention to African warlord Joseph Kony and his various crimes and human rights abuses in Liberia as head of the Lord's Resistance Army.

The video garnered tens of millions of views worldwide and caught the attention of prominent public figures. But the attention quickly turned sour when viewers started noticing flaws in the video. Critics slammed the group for not understanding the complexity of the issues and for being ill-informed. Others wondered just how much of the organizations' resources were going toward promotion instead of the issue. After Invisible Children co-founder Jason Russell was detained for drunk and disorderly behavior, the atrocities of the Lord's Resistance Army were lost in the shuffle.

A civic disservice. These fake videos distort our sense of reality. And these fictions, which one might argue are 'white lies' in the name of a greater good, aren't necessarily harmless. When we can't trust something as concrete as video footage, it creates problems.

Take, for example, the recent video of a young boy dodging bullets to save a young girl in Syria:

The video certainly garnered attention and sparked debate, as its maker hoped it would, but not on war and children. Rather, critics slammed the video for undermining both the public's trust and journalism. As the Global Post so aptly put it: There is "more than enough footage ... that is genuine to not have to make fake incidents to make some contribution to a debate."

Video coverage is essential to the journalistic coverage of conflict, as many times the incidents occur in places that journalists cannot go. As the Global Post pointed out, amateur videos have "proven essential to uncovering or aiding investigations into some of the worst crimes of the war."

Yet in one fell swoop, this clip undermines video's reliability and makes the task of those fighting to bring serious issues to a larger audience far more difficult. When too many fakes are made, it becomes hard to differentiate between what's real and what's not. The danger of that situation is that when something real and alarming does happen, we might not know whether we should believe it.

It's like the boy who cried wolf – except this time, with catcalls.