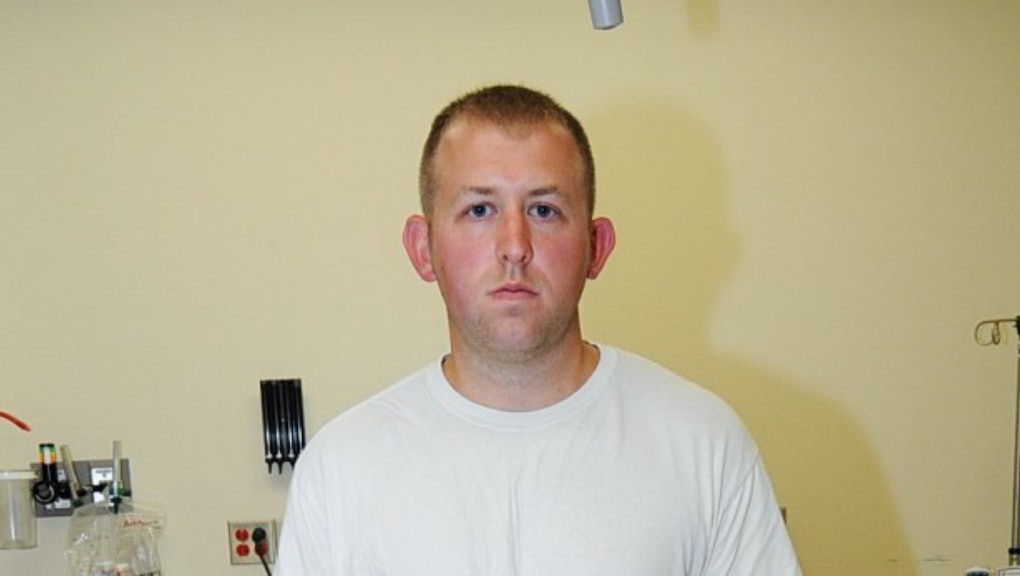 If You Haven't Read the Full Darren Wilson Testimony, Here Are 12 Unbelievable Excerpts

In documents released late Monday night after a Missouri grand jury decided not to indict him for the killing of unarmed black teenager Michael Brown, Wilson gives a detailed, firsthand account of what he says happened on that hot August afternoon in Ferguson. The testimony was given Sept. 16, a little more than five weeks after Wilson encountered Brown walking with his friend Dorian Johnson down the middle of a suburban street.

In Wilson's telling, the 18-year-old is a cross between "Hulk Hogan" and, in what many have noted is a racially charged choice of words, a "demon." The teen is also described as a raging, profane and powerful man who rushes at Wilson through a barrage of bullets, only falling after being struck in the head. The officer's descriptions play on well-worn racial stereotypes that dehumanize black men, perhaps shedding light on his mindset in the moments before he opened fire.

Wilson's testimony below was delivered under oath. The questioners were lawyers for the St. Louis County prosecutor's office. They were not, however, acting as prosecutors. Because this was a grand jury hearing, they were only trying to get Wilson on the record with his story and leave it to the jurors — 12 in all, nine white and three black — to determine if there was probable cause for bringing either murder or manslaughter charges. The jurors were allowed to interrupt at any time to ask questions of their own. They rarely did.

After a brief introduction, Wilson described the events of that day to the grand jury. His testimony contains descriptions of extreme violence and profane language. Here are the 12 most maddening details from his account.

1. Wilson was not called to confront Brown or Johnson.

Wilson testified that he was only in Brown and Johnson's vicinity by chance. He dealt with a "sick call," helping a mother and child into an ambulance, before continuing on his patrol. But before he left, something else came across his radio — a robbery in a nearby store.

Wilson turned left onto Windward Court, which turns into Canfield Drive. He was headed west, toward West Florissant Avenue, which became the locus of the protests in Ferguson that followed.

2. Though Wilson was trained to use a Taser, he chose not to carry one.

Wilson was then asked what kind of weapons he was carrying. He lists a gun, pepper spray and an expandable baton. Wilson was not carrying a Taser — the first in a series of decisions made by the officer that would eventually cost Michael Brown his life.

He went on to describe the initial encounter with Brown and Johnson, who were both walking down the middle of the street. He said the teens were blocking traffic, so he asked them to leave the center of the street. After Johnson said they were "almost to their destination," Wilson turned to Brown.

3. Wilson said Brown snapped at him, asking, "What the fuck are you going to do about it?" when he was asked to get on the sidewalk.

Within seconds, they would be fighting and, another few seconds later, Wilson would be shooting.

4. Wilson said he approached Brown because he thought the teen had robbed a convenience store.

With this, we finally have Wilson's own explanation for why it was appropriate to engage Brown. There had been conflicting reports about whether the officer knew about the alleged convenience store robbery.

Six days after the shooting, police released video of that incident, which appears to show Brown ripping off a pack of cigarillos and walking out of the store. But Ferguson Police Chief Tom Jackson later said the incident "does not relate to the initial contact between the officer and Michael Brown." Here — a month later — Wilson suggests that it very much does.

5. After exchanging words, Wilson said Brown struck him through the car window.

According to Wilson, Brown stood less than a foot away after their initial exchange. Brown glowered at him, Wilson said, "almost like to intimidate me or overpower me." Wilson said he told Brown to "get the fuck back." Brown, he said, responded by attacking him, punching him with his right fist through the open car window:

7. Wilson claimed Brown had a magical pack of stolen cigarillos.

At this point the attorney questioning Wilson seized on a bit of confusion in his telling of the story. She wanted to know where the cigarillos, which Wilson had very carefully noted were being held by Brown, had gone during their altercation. If he was holding them in his right hand, she asks, how was he punching Wilson with it?

Wilson went on to describe a fight half in and half outside his driver-side door. Despite this apparently mortal threat, he recalled seeing Brown, with his left hand, passing the cigarillos to someone we assume is Johnson, Brown's friend.

8. Wilson said Brown said he was "too much of a pussy" to shoot him.

Wilson said he had no other option than to draw his gun.

There was no follow-up on Brown's alleged profane comment. The attorney questioning Wilson then asked him to more clearly articulate why he believed he needed a gun.

9. Wilson believed that Brown would have killed him with one more punch.

"Fatal." Wilson told the court that he believed Brown might have killed him with another punch. Even the attorney was incredulous. "You thought he could hit you and it would be a 'fatal' injury?" she asked.

"Or at least unconscious," Wilson answered. "And then who knows what would happen to me after that?"

In perhaps the most infuriating passage, Wilson used dismissive language to refer to Brown as "it" when claiming Brown looked like a "demon":

The language here is difficult to stomach. The term, "demon," has long been used in white supremacist propaganda. There is no evidence that Wilson has any ties to racist groups, but his term of choice here is extremely loaded. People will be examining this quote for a long time.

11. Wilson said Brown continued running at him through a hail of gunfire.

After the initial fight and gunshots, Wilson said he jumped out of his car and began to chase Brown. He and Brown made it past two other cars on the street, to a distant light pole, when Brown stopped, turned around and began to run back toward the man shooting at him.

"Still coming." Wilson said Brown continued his bull-rush through a storm of gunfire.

12. Wilson said Brown was not hurt by the gunshots, but got 'mad' at Wilson for shooting.

At this point, Brown — according to Wilson's testimony — had basically become the Incredible Hulk.

Brown had been struck in the head. Forensics experts later found that he was killed immediately by the last shot.

Within minutes, there were multiple cop cars on the scene. Wilson saw his sergeant and began to explain what happened. The sergeant told Wilson to go sit in the SUV. But Wilson refused. There was a crowd forming and he didn't want to be "singled out" as the officer who was doing the shooting.

Wilson then left the scene — and Brown's uncovered body — in the street on a steamy summer. As he left, driving his sergeant's patrol car, he saw another vehicle pull up with a "female driver."

She is now believed to have been Lesley McSpadden, Michael Brown's mother.

A little more than two months after Wilson gave this testimony, the grand jury met for the final time. And Monday night, St. Louis County Prosecuting Attorney Robert McCulloch delivered its decision. Based on this and thousands of other pieces of evidence — from eyewitness testimonies to forensic experts' analyses — the jurors decided that they did not have "probable cause" to think that Wilson acted unlawfully and should be subject to the kind of trial we are more used to seeing on TV or in the movies.

In that court, the stakes would have been higher, and prosecutors would have asked more probing questions. The state would have had to prove "beyond a reasonable doubt" that Wilson acted in either a negligent or malicious manner.

But with the grand jury's decision, there will be no criminal trial. Brown's family and their supporters will be left with documents like this one. And still more questions.