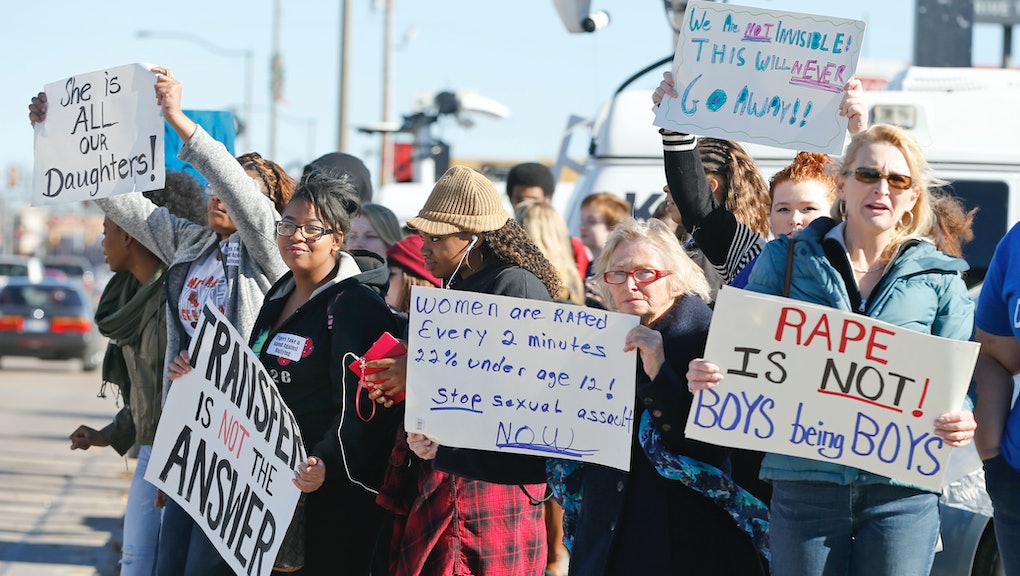 The news: Last Friday, Jezebel posted a disturbing account of three female students in Norman, Oklahoma, who were allegedly raped by the same male classmate — and bullied out of school as a result.

But while these girls and their families say the school failed in providing a safe environment for them, they have found powerful support elsewhere: the local community.

On Monday, a group called Yes All Daughters organized a peaceful protest outside Norman High School. Over 1,000 students, parents and town residents attended the seven-hour gathering, despite the school administration warning students that they'll be marked absent if they participate in the walkout.

The result was a moving display of solidarity and support for the three girls, as well as a strong rebuke of the school for its lack of action:

The backstory: A local feminist knitting group in Norman first contacted Jezebel with the story of three girls — two are 16, one is 14 — who all accused the same male student of raping them over the past year.

While Norman High School reacted quickly by suspending the male student for the remainder of the year, for the three girls, the ordeal that followed was worse than they could have expected: Fellow students severely bullied all three girls while accusing them of lying, and the administration was almost completely unsympathetic to their concerns.

One was suspended after swinging her book bag at a boy who taunted her by saying, "I hear you love being raped in the ass." Another was suspended after a female student physically assaulted her, calling her a slut. And unbelievably, the third was suspended for showing up to school intoxicated the day after her rape, because she was still intoxicated by the drugs her alleged assailant had used the night before to incapacitate her before the assault (the names have been changed to protect the girls' anonymity):

All the girls have since dropped out of school, no longer feeling safe from their classmates. "I'm scared," one of the girls told Jezebel. "I know I'm not safe if I go back now. I just want to get my education and be happy at school and live a normal life."

This protest is a big step in the right direction. While Norman High School did not endorse the student walkout, it acknowledged that the protesters had the right idea. "We applaud Norman High students for conducting themselves in a mature, respectful manner today," district Superintendent Joe Siano said in a statement. "We continue to be very concerned about victims of sexual assault and are committed to doing what we can to support them and ensuring our schools provide a safe, secure and supportive environment for our students."

Siano added that the district is taking a look at the protesters' list of demands, which include accommodating the educational needs of the victims and implementing a prevention program for sexual assault, harassment and bullying. While these steps may seem like too little, too late for the three girls who have already been targeted, they might go a long way in preventing this from happening again.