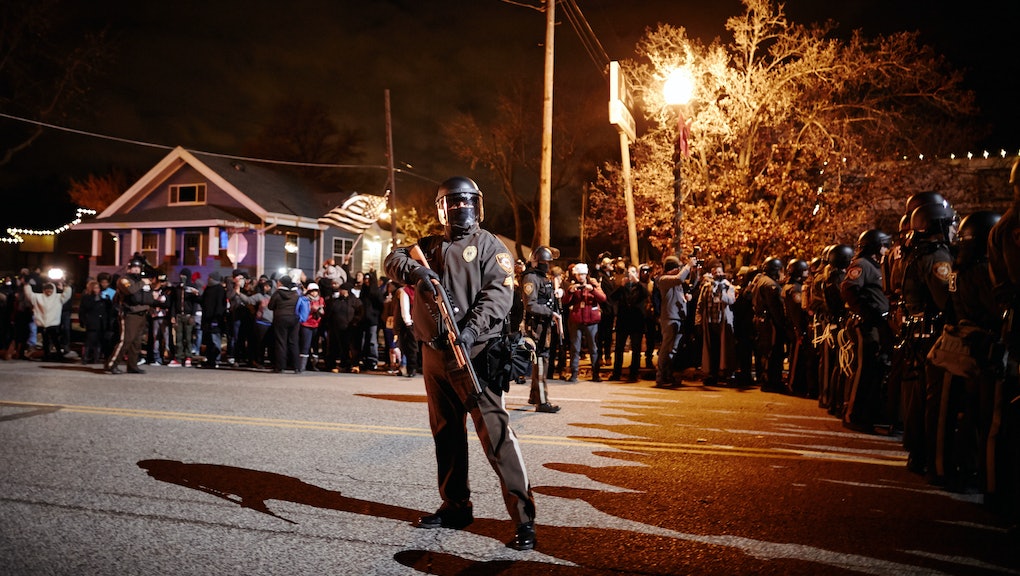 That's one minute for each hour his body was left in the street on Aug. 9.

But it didn't happen. The crowd gathered in front of the Ferguson Police Department reacted instantly. Some were crying, some were shouting, others were standing by in silent disbelief.

Brown's mother, Lesley McSpadden, collapsed in tears, screaming: "[The police] don't care about us," while a group of supporters tried to shield her from video cameras.

Within 20 minutes, this normally quiet stretch of South Florissant Road erupted. A group of protesters marched south to confront a line of police officers, shouting, "No justice, no peace, no racist-ass police." They were promptly ordered to disperse — they declined.

Someone threw a rock through the window of a parked cruiser, after which about six people attempted to flip it over.

Then a bottle of lighter fluid came out. Here's what happened next:

By the time officers started advancing, a cadre of armored trucks had assembled behind the police line. Riot gear was in full effect, including helmets, shields and prominently displayed shotguns.

Despite this laughable tweet from the St. Louis County Police Department, the cops fired multiple tear gas canisters into the crowd, sending people scampering north on Florissant and up various side streets.

For at least an hour, demonstrators and the media were trapped within a five-block radius north- and southbound. Police refused to let anyone leave the area.

Some demonstrators vomited from the intensity of the gas. At least one woman was seen experiencing an asthma attack, while another lost consciousness and was carried off by a group of friends.

A man berating a parked squad of riot officers was told by one cop he "talked too much."

The pattern of demonstrators re-entering the street and being fired upon with tear gas continued for another two hours. Throughout that span, a small group of people used rocks to shatter the windows of shops lining the street, despite the protests of many others.

As this was happening, the parallel thoroughfare of West Florissant Avenue was seeing its own unrest. By the time police started letting demonstrators leave heading north from the station, much of that street was in flames. Traffic was stalled for blocks.

The devastation on West Florissant was thorough: People were breaking into auto shops and beauty supply stores, making away with various goods and setting buildings on fire.

"We got some talented arsonists in St. Louis," one man was heard saying sarcastically.

"You with the media?" a teenager asked us. "Let 'em know that we shut shit the fuck down."

According to reports, at least 12 businesses were set ablaze, with 29 arrests made and an unspecified number of storefronts destroyed.

Firefighters stemmed the damage wherever they were able.

With time, the number of people thinned out significantly. By around 12:30 a.m., stragglers drove up and down the street. Some shouted, "We want justice" and "Mike Brown."

As dawn crept over Ferguson and its neighboring suburbs, the task of rebuilding after a night filled with tragedy loomed large. And it's not tragic because stores were burned, shops were looted or were people arrested. It's tragic because a cop killed an unarmed teenager and got away with it.

That's why people are angry. This is the country we live in.