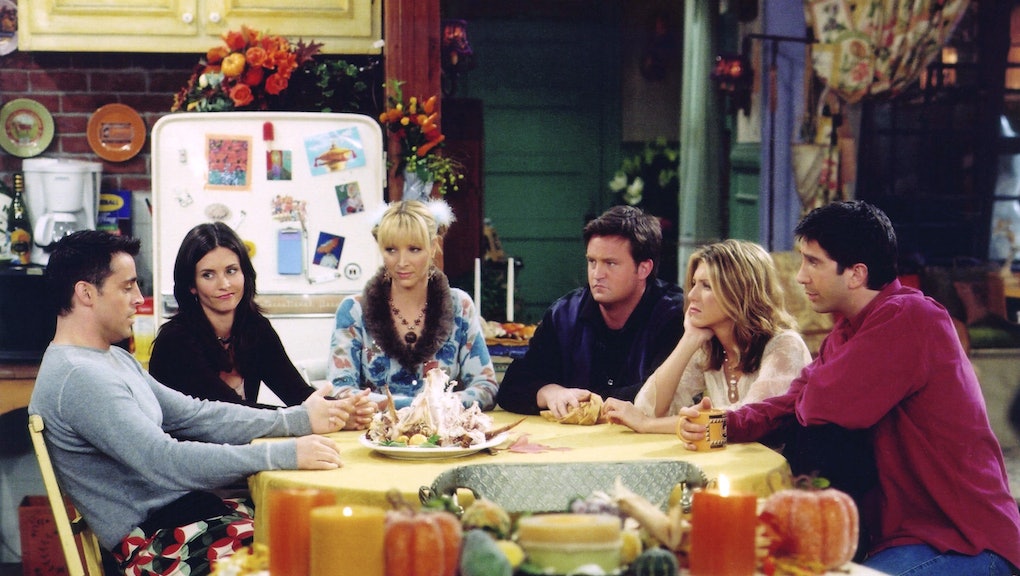 Everything We Learned About Friendsgiving From 'Friends'

Nobody did Friendsgiving quite like Friends did. Instead of heading home for Thanksgiving, the characters on the hit sitcom celebrated the holiday each year together, with new antics whenever November came around. From turkeys on heads to a hilarious turkey bowl, Friends always had a fresh take on how to do Friendsgiving right.

Although things always seemed to go south for a bit on the Thanksgiving episodes, the pals always found a way to make it out on top. They set the golden standard for what Friendsgiving should be and taught stuffing-lovers everywhere what the celebration is really about: good food, great laughs and even better friends. Take a look at what we learned from the Central Perk regulars.

Sometimes the best part about Thanksgiving is not seeing your family.

Rachel learns this the hard way when her older sister Amy (Christina Applegate) shows up on her doorstep asking for a hair straightener. Amy tactlessly pushes the buttons of the entire posse and gets into a fight with her sister when she finds out Rachel and Ross would leave their daughter in the care of Monica and Chandler if anything happened to them. The two Greens make up by the end of the episode, but it's enough drama to reconsider spending time with the fambam.

Don't get us wrong — some people totally love quality family time. But some also totally dread the petty antics that commonly ensue. Friends showed that you can have a wonderful night on Friendsgiving with loved ones who aren't relations. You'll probably end up seeing your family for December holidays anyway, so you might as well get wine-drunk with the pals instead.

It seemed like most years the Central Perk crew take for granted the fact that Monica so graciously opens her home every November. Joey sticks his head in a turkey, and almost everyone shows up late to dine (even given Phoebe and Rachel's semi-acceptable excuse of a baby beauty pageant).

Hosting is a big responsibility. It means coordinating who's bringing what or even cooking everything, if you're not doing Friendsgiving in the potluck fashion. Always offer your help with setup or cleanup if you're a guest, and feel the situation out to see whether or not your help is needed in the kitchen, because there's nothing worse than too many cooks.

It's a time to bring your age-old Thanksgiving customs to new traditions.

This always tends to happen at the first Friendsgiving your friends host together. Everyone has a different way of cooking dishes or setting the table — case in point, the three kinds of potatoes that Monica has to prepare for season one's dinner: mashed potatoes with lumps for Ross, tater tots for Joey (of course) and whipped potatoes with peas and onions for Phoebe.

There are two ways to handle the situation. The first is to appease everyone's wants and make sure that everything that they're used to is available, so Friendsgiving is like a little piece of home. The other solution is to find a compromise that brings together what everyone wants, creating a new tradition for your group.

Rachel's sister, the son of Monica's ex-older fling and an old high school enemy (played by Brad Pitt) are all last-minute invites to the Friendsgiving festivities. Although their sudden appearances to the dinner table result in everything from shattered china to balcony smooches, the wildcard always sparks hilarity.

If you run into someone who's lacking Thanksgiving, it's clearly the kind thing to let them tag along (especially considering how many leftovers there usually are). But also be prepared for the unexpected if they don't totally jibe with the Friendsgiving mood. That might stress out some, but others might love the spontaneity it adds to the evening.

Don't let competition or jealousy take over the holiday.

From Monica and Ross' insane competitiveness over football to Chandler and Joey's tiff over a girl, Friendsgiving is a time to pass up the gauntlet and grab the cranberry sauce instead. The sibling rivalry is so strong that Monica and Ross are left outside, clutching a football as it begins snowing. Not the warmest way to celebrate the holiday.

Whether you're competing to see who can drink the most or by sharing successes, make sure it's in a healthy atmosphere at Friendsgiving. You're there to break some bread with people you care about, not obliterate them in silly games or obnoxiously show off what you've been up to.

On top of giving thanks, it's also the perfect time to come clean.

Revelations are common at Friendsgiving on the show: Chandler's afraid of dogs, Monica broke Ross' nose one year playing football and Ross lies to his parents that Chandler got him high one night when he got caught faded. While we typically express what we're thankful on the holiday, it's also a more than acceptable night to let the truth come out.

The giving thanks part of Thanksgiving is a tradition that encourages introspection about everything that's happened in the past year, a useful exercise in staying humble and gracious. By coming clean about what you've kept hidden, it also helps you look back and cleanse the soul. Plus it gives about a month to prepare for New Year's resolutions.

Leave your grudges at the door.

No matter who's at your table, invited or unexpected, it's better that whatever you have against other guests is forgotten. For example, Brad Pitt's Will Colbert makes snide remarks about Monica because she made high school hell for him when he was fat. The hostility puts a huge damper on the evening.

It's not worth ruining your own Friendsgiving and spoiling the mood for attendees just because of how you feel about a certain somebody also there. And really, who wants to be filled with petty feelings when you can be filled with delicious homemade stuffing?

Turkey and mashed potatoes don't make the meal. It's who you have it with.

Despite totally burning the turkey and smoking up Monica's apartment at their first Friendsgiving together, the group has the perfect meal at the end of season one's "The One Where Underdog Gets Away," complete with grilled cheese, Funyuns and wine. They might not have been able to feast on the usual Thanksgiving staples, but the true staples for the next nine years were each other.

As much as we like to think about Friendsgiving in terms of what we're going to get to eat, at the end of the day, it really is about the people you're spending it with. Whether the table has a plump turkey for grubbing or some sesame chicken from the Chinese restaurant down the street, friends are obviously the ones that put the friends in Friendsgiving. And most important to remember: who's bringing the booze. As the theme song goes, "I'll be there for you."

Feeling emotional and missing the show now? No worries, soon you'll be able to watch every single episode on Netflix. Your leftovers might not last until then, but the laughs from Friends will.