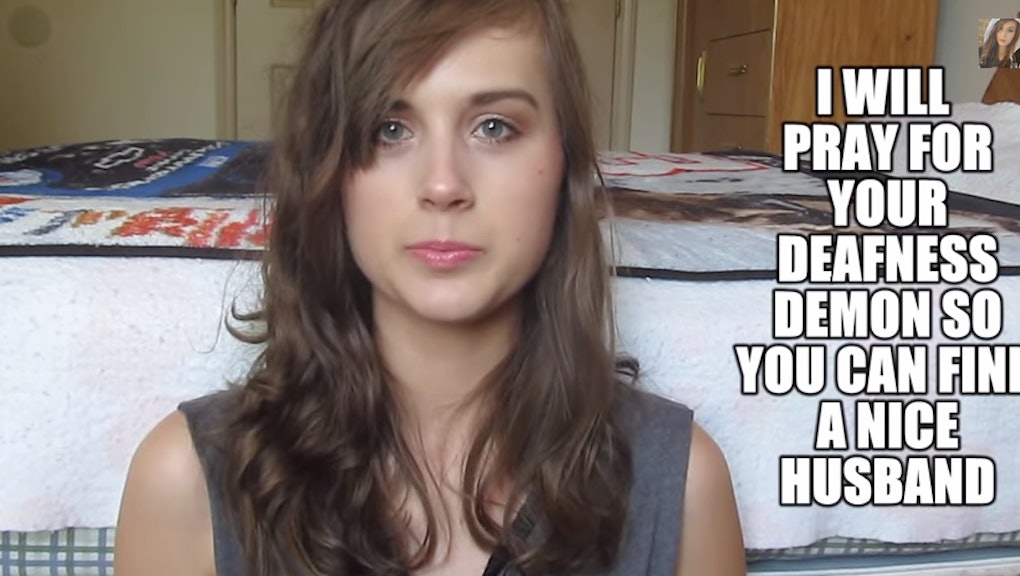 The ability to hear things is a part of being alive that most people take for granted. Many hearing people can't possibly imagine life otherwise.

It's not unthinkable for people to have questions about people who are deaf or hard of hearing. But sometimes, the unbridled curiosity goes too far, and what could have been a mutual connection ends up becoming an insulting experience. These unfortunate incidents also highlight just how difficult living in a world that largely caters to hearing people can be on a daily basis.

Video blogger and makeup guide Rikki Poynter knows that feeling all too well. In a new video, "Shit Hearing People Say (Things You Don't Say to Deaf and Hard of Hearing)," she highlights some of the most ridiculous things she's been told as a deaf person.

"You don't look deaf," one person told Poynter, to which she responds, "Is there some type of secret dress code that we don't know about and that apparently the hearing people know about?" And sticking a Post-it note to her forehead, with the word "deaf" written on it, she asks, "Do I look deaf now?"

Poynter's approach includes a healthy serving of snark, all the while making the important point that the experience of being deaf or hard of hearing is not monolithic. In the process, she also debunks some common myths, including that all deaf people must know sign language or can't possibly be able to talk using their voices and verbal language skills.

"Why don't you know sign language? You must not really be deaf," one person said. Poynter quips, "Last time I checked, deafness has to do with whether your ears work and not the languages you know." Indeed, some deaf or hard of hearing people undergo years of speech therapy to communicate verbally. Others primarily use sign language.

While most might assume that not having conventional hearing abilities is relatively rare, in fact, that's not true at all. According to the National Institutes of Health, 1 in 8 people in the United States — 13% of all Americans — aged 12 or older has hearing loss in both ears, based on standard hearing examinations. The types of clueless remarks Poynter discusses are actually quite common.

If there's anything to be learned from the video, it's that deaf and hard of hearing people don't want to be anyone's sideshow, nor do they appreciate being made the butt of clueless jokes about their ability. It only takes a moment to make a callous remark, but it also takes only a moment to replace it with conscientiousness and empathy.