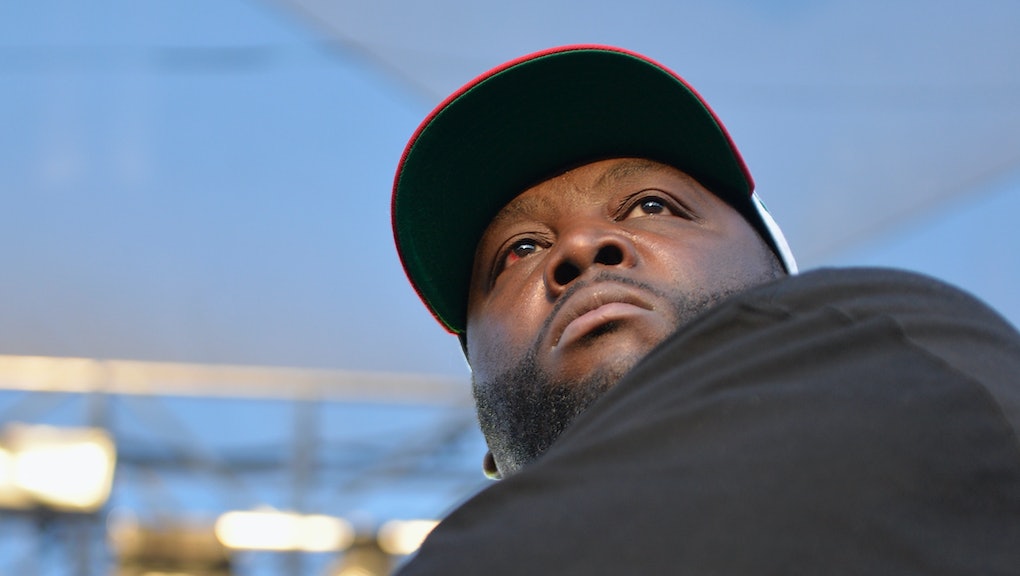 Monday night, prosecutor Robert McCulloch announced a grand jury's decision not to indict Officer Darren Wilson for shooting and killing unarmed teenager Michael Brown. Minutes later, El-P and Killer Mike, the two MCs who make up acclaimed hip-hop duo Run the Jewels, took the stage to perform at a club just outside St. Louis. It was about as close as one could be to Ferguson that night without being affected by the chaos of the protests.

But rapper Killer Mike wasn't just there to make music. He was there to make a speech — one of the most potent, gripping speeches anyone has made about civil rights this year.

"It's about poverty, it's about greed, and it's about a war machine," he said. "It's us against the motherfucking machine."

This isn't the first time Killer Mike has spoken on Ferguson, but it is the most powerful. He has been one of the most articulate and valued voices in the conversation since its beginning. His Instagram post after the news broke cut to the core of the issue — a mother's son was killed, a family was destroyed. He continued his exploration in a brilliantly conceived Billboard op-ed. And his interview on CNN is still one of the most insightful breakdowns of the feelings and forces involved in the conflict.

His speech at the Run The Jewels show Monday night was no different. These are the most powerful quotes:

"When I stood in front of my wife, and I hugged her, and I cried like a baby, I said, 'These motherfuckers got me today.'"

"We are not going to keep playing that race card, because we know you don't value my skin."

"We know you do value his [pointing to El-P, who is white], but we're friends and nothing is going to devalue that."

"Before I came out here tonight, there was no peace in my heart, and I wanted to walk out to 'Burn This Motherfucker Down.'"

"But I got to tell you, I'm from Atlanta, Georgia. Something said, 'Just look for something [Martin Luther King Jr.] might have said.' So I googled Martin King and Wikipedia popped up, and he was 39 years old when you motherfuckers killed him. He was the same age as I am, the same age as [El-P]. He was a young man when they killed him"

"If I die when I walk off this stage tomorrow, I'll let you know this: It is not about race, it is not a class, it's not about color, it's about what they killed him for."

"So as I go tomorrow, I might go the day after, the one thing I want you to know is that it's us against the motherfucking machine!"