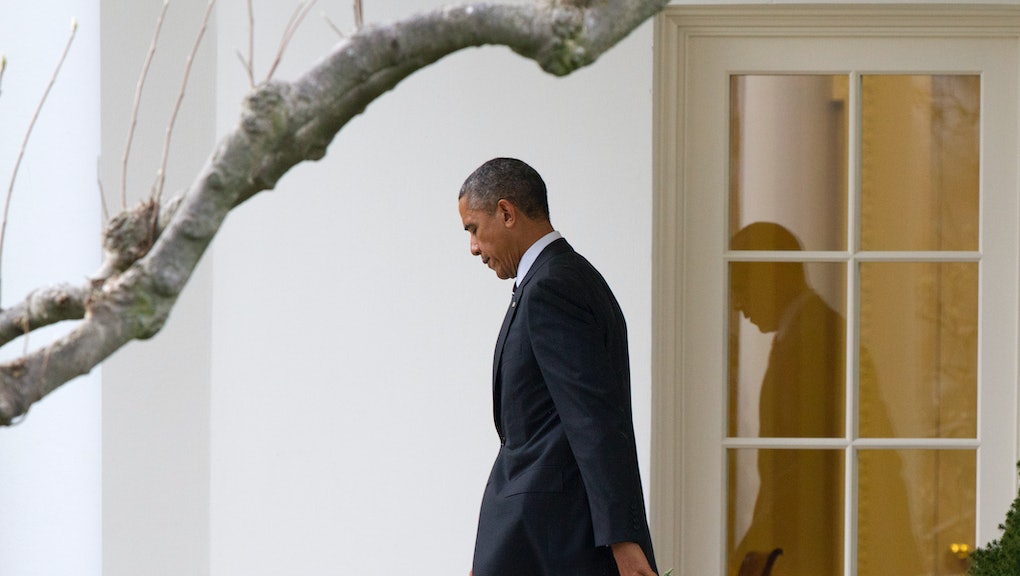 Specifically, his status as the first black U.S. president has hamstrung his freedom to tackle racial injustice while presiding over a country whose foundation and transformation every century of its existence has been defined by the issue. Faced with a double standard on how to talk about race, Obama has generally shied away from taking the lead on issues of racial injustice, knowing that his words have an extraordinary ability to divide a divided nation even further.

But at a moment when the world is scrutinizing the United States' broken criminal justice system and its regime of mass incarceration with unprecedented intensity, there is a window of possibility to reform policies that exacerbate racial disparity. The issues have become so prominent that even publications as steeped in status quo ideas as the Atlantic consider mass incarceration "perhaps the greatest social crisis in modern American history." And Obama has the tools at his disposal to make a difference before leaving office — even if some liberals are cautioning against it.

The dilemma: Obama's unique racial encumbrance is why he didn't give the Ferguson speech that his supporters wanted, Vox's Ezra Klein argues. After a grand jury in Missouri declined to indict white police Officer Darren Wilson for killing unarmed black teenager Michael Brown in August, Obama called for calm and lawfulness in his signature professorial style from the White House.

Juxtaposed against scenes of chaos in Ferguson, Obama's body language and tone provided for an absurd spectacle that angered critics of the jury's decision. But Klein argues that this absurdity is ultimately trumped by surveys revealing that Obama is much more polarizing on race-related issues than other presidents, and so his hands are tied.

Klein is right about the widely accepted idea that Obama can often alienate the conservative electorate more easily than other presidents, but what's unclear in his analysis is what Obama has to lose.

These are things Obama cannot list among his fears:

Jeopardizing his next term. Obama won't be on the ballot again, so he has no need to take his electoral considerations into account.

Losing a productive relationship with Congress. There hasn't been one, and with Republicans controlling the Senate next year, it won't be better in terms of executing a progressive agenda.

His party's approval ratings. The Democrats' standing with the public is extremely low already, and it's difficult to see how Obama taking on this issue immediately after an election cycle, during which they were pulverized, threatens their prospects in 2016.

Casting doubt among his base. Many Democrats have chosen to read the poor midterm results as grounds for a brand reorientation that leans further to the left; this is partially why they've been quick to give Sen. Elizabeth Warren (D-Mass.), the most aggressively progressive senator in the Senate other than Bernie Sanders of Vermont, a conspicuous new leadership role. Obama could potentially excite a base that's currently waning in enthusiasm for its party.

Obama has the power to act: The aforementioned factors are part of the calculations behind the White House's decision to take executive action on the divisive issue of immigration reform last week. Similarly, without needing or fearing the loss of huge quantities of political capital, Obama can take the lead on criminal justice.

So what can Obama do? The White House has a number of things in its arsenal: the bully pulpit, influence over the Department of Justice, the ability to create presidential commissions and panels.

And according to the Atlantic's Stephen Laurie's persuasive case for Obama to take action, follow the money:

The most pressing task is to address the enabler of incarceration: money. Policy experts from leading liberal and conservative justice-reform think tanks told me that spending is the single most important avenue for reform. Money determines outcomes; change that and you can change the whole system. In fact, as Inimai Chettiar, director of Justice Program at NYU Law School's Brennan Center, explained to me, the current system arose out of expanded federal spending.

Obama has long been a man of caution at a time of crisis. It's helped stabilize the economy and pass important policy reform. But for many progressives, little of it has been moving and memorable. Is it that they haven't been paying attention? Or is it because they could have so much more?

As a presidential candidate, Obama gave a breathtaking speech on the messiness of the multiracial American experiment, and his subsequent election gave many hope that the country was taking a step toward greater racial harmony. But the fact of the matter is that the U.S. currently incarcerates a greater percentage of its black men than South Africa did under apartheid. Hope isn't enough.