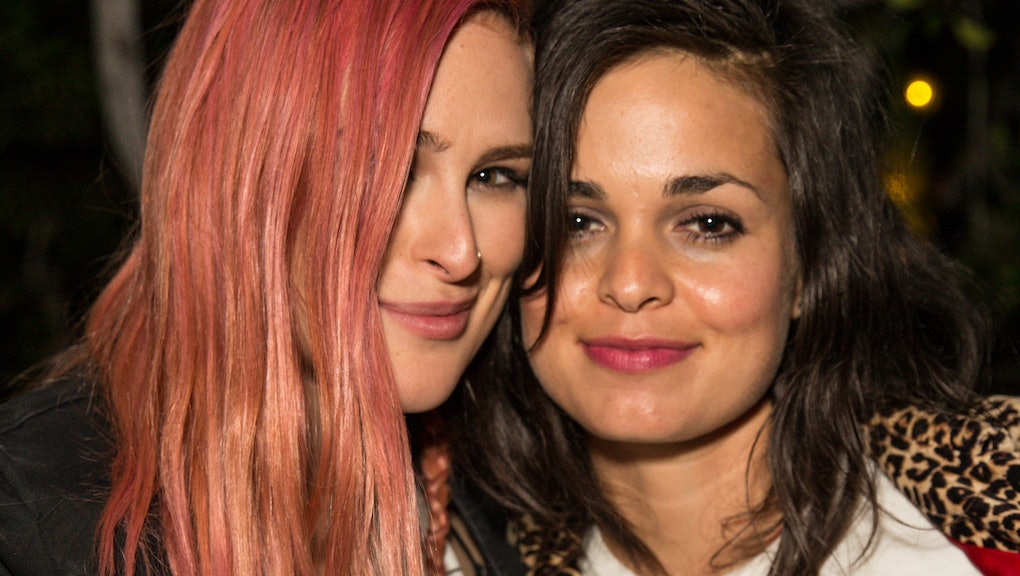 Topless Women Are Running Through the Streets of New York

Women are running through the streets of New York City topless, but they're not just doing it to feel a cool breeze.

Groups of women are participating in the Free the Nipple campaign, which promotes women's already-legal right (in New York City, at least) to go topless in public. This week, the campaign added a new element to its efforts with the release of this trailer for the feature film Free the Nipple:

Men have always had the right to go topless in public, and now these women want that same right and social acceptance. As the laws currently stand, it's illegal for women to be topless in 35 states, the Huffington Post reports. In Louisiana, the Free the Nipple campaign says, an exposed nipple can result in $2,500 in fines. Men, on the other hand, can bear their chests without so much as the bat of an eyelash. But while men's chests are a nonevent, America has deemed the female nipple something explicit, even salacious.

The film, which hits theaters Dec. 12, fights back against that perception by telling the story of a group of women who fight the censorship and exorbitant fines that society has imposed upon women and their bodies.

Other crusaders: The girls of the Free the Nipple campaign aren't the only ones fighting double standards and unfair limitations. Many efforts have caught the public's attention and some have even spurred a change.

For instance, in June, Facebook finally changed its anti-nudity policies to allow photos of mothers breast-feeding to be posted, following heavy criticism. Before, the fully exposed breast and nipple in the photo was deemed as "obscene" and "offensive." But motherhood is neither of those things.

The thing is, people don't seem to take issue with nudity on the whole. Just look back a couple of weeks to when Kim Kardashian's naked butt took the Internet by storm. Actress Alyssa Milano took to Twitter during the obsession to ask just why Kim's butt resulted in nothing but likes and retweets, but a selfie that she posted recently of her breast-feeding her daughter caused major backlash.

Though the photo clearly reveals a tender mommy-daughter moment, many expressed discomfort and questioned whether it was appropriate that Milano shared the photo on social media.

In light of the vastly different reactions to Milano breast-feeding and to an oiled-up Kim Kardashian baring it all, the assumption arises that society is only comfortable with women's bodies when they're viewed through the lens of sexuality. When boobs are placed in the utilitarian context of breast-feeding, a completely natural act, people don't seem to know how to respond.

When Milano took to Twitter to ask just why this was, her fans uttered similar rationales for the drastically differing responses to the two nude photos.

Women's breasts — even when displayed in the context of something as natural as breast-feeding – make people squirm. While people might be fine with sexiness, they're not fine with an open display of the female body as a simply a body. This discomfort and shock over something as natural as breast-feeding reveals a deeper problem in society: the perception of women's bodies.

Between slut shaming and catcalling, women's bodies are being taken out of their control and placed at the mercy of the public and its sexual desires.

This problematic trend was highlighted in a recent performance series by artist Diana Oh in which she, along with other women, stripped down and stood on New York City streets in lingerie. Perhaps unsurprisingly, passersby ogle, point and laugh, which underscores the entire point of Oh's performance art project:

"Being a sexual woman does not strip us of a humanity," Oh said. Whether a woman is wearing lingerie or a parka, she deserves to be treated with the dignity and respect owed to a person, not an object.

This may sound obvious, but for some reason people still seem to forget it or not even notice the blatantly unequal response to a man's body versus a woman's body. Free The Nipple should catch some attention. And hopefully spark some change.