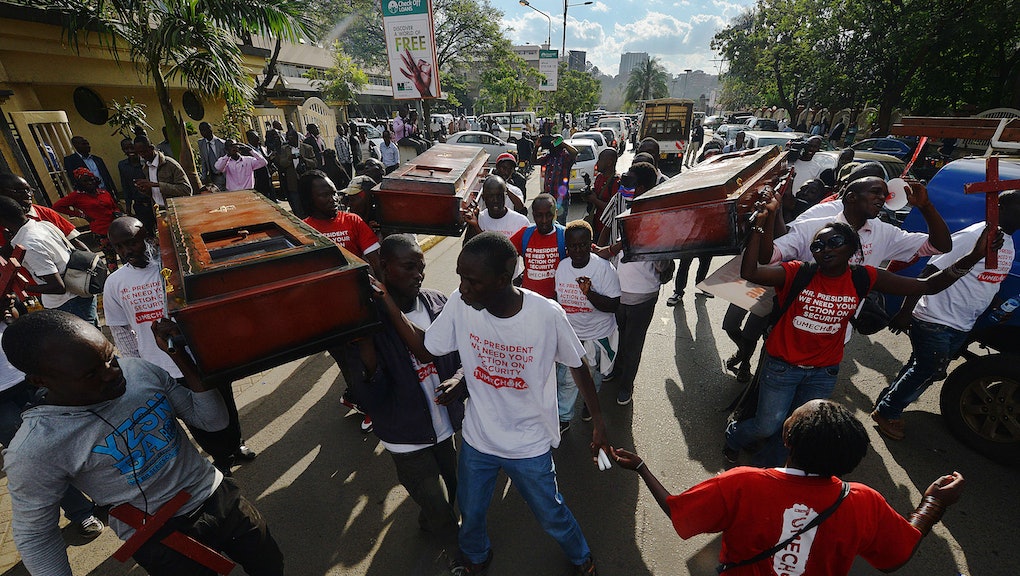 Kenyan Protesters Stand Up to Their Government's Inept Violence Control

Months of unrest came to a head Tuesday as hundreds of Kenyans stormed the streets of Nairobi with coffins and red crosses to protest the government's failure to stop violence perpetrated by the militant Somali group al-Shabab.

Though past violence has been a problem, protesters took to the streets two days after al-Shabab gunmen hijacked a bus in the northern Kenyan town of Mandera and killed 28 non-Muslim passengers.

The protests, rallying support on social media with the hashtags #Tumechoka, meaning "We are tired" in Swahili, and #OccupyHarambeeAve are taking place on Nairobi's Harambee Avenue, a major artery on which the president's office is located. Protesters placed coffins at the gate of the office while police fired tear gas to disperse the crowd, Reuters reported.

"One thing we want to do is put it clear to our leaders that the state of security is worrying for all Kenyans," Achieng Otieno, an information technology consultant who attended Tuesday's demonstration, told the Associated Press. "How do you explain someone coming from nowhere and shooting 28 people?"

The militant group, linked to Islamic extremism, has carried out more than 100 bombing and shooting attacks inside Kenya since the country's military sent troops into Somalia in 2011. Kenyan authorities have also shut down mosques across Kenya, carried out mass arrests of Muslims and killed Muslim leaders in its effort to weaken al-Shabab.

The attacks are rising and sowing fear. But as the recent protests show, they're also catalyzing demands for action, putting pressure on Kenya's government to provide security for its citizens.

"We want to see top security officials dismissed because they have clearly failed to perform their duties," Hussein Khalid, a human rights lawyer, told Reuters.

"If the government fails to respond to our call, we will continue with this demonstration because enough is enough."