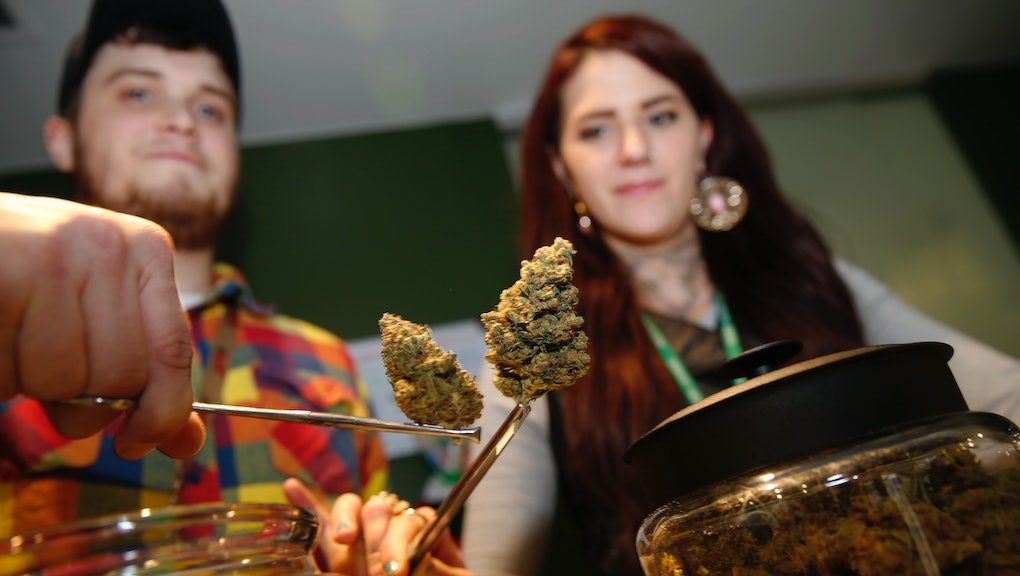 This holiday season, Santa may stuff stockings in Colorado with something new.

The state's legal marijuana dispensaries are preparing for the year-end holiday rush, with some retailers referring to upcoming plans for "Green Friday." The Associated Press reports that marijuana retailers in the Centennial State are turning to old-fashioned doorbusters to drive up holiday sales, including some cut-rate deals:

The Grass Station in Denver is selling an ounce of marijuana for $50 — about a fifth of the cost of the next-cheapest strain at the Colorado dispensary — to the first 16 customers in line Friday, Saturday and Sunday. That works out to less than $1 a joint for the ambitious early-rising pot shopper.

Thirty-dollar vape-pen cartridges will also be half price.

"We have really high expectations," Grass Station owner Ryan Fox told Bloomberg. "Now we've got the legal means for people to give marijuana as a gift, and that's never really been something that was feasible in the past."

Dashing through the grow: It takes a lot more than elves to bring you all that legal weed. Marijuana retailers in Colorado have to sort through 500 pages of regulations to determine which marketing techniques are allowed under the state's legalization measures, meaning they have to be extremely cautious about compliance. Making a mistake and violating the law could result in serious penalties, especially thanks to concerns from state officials over the possibility that marijuana edibles could be marketed to minors.

Despite the hurdles, Colorado's marijuana industry is growing rapidly. In August, retail sales hit just short of $35 million a month, putting recreational weed on track to totally outstrip the medical marijuana market. Dispensary owners and growers hope to take marijuana totally mainstream. The Huffington Post reported earlier this month that weed product manufacturer Dixie hopes that its new marijuana-infused canned drink will one day be consumed alongside beer at barbecues. In anticipation of a wider market, the company has prepared how-to guides on its website explaining how to experience a safe and enjoyable high.

The new stores aren't just head shops with actual weed. MarketWatch reports that Colorado "dispensaries can be quite professional, even sleek, in their design," with a shop named Terrapin hoping to nail the "high-end pharmacy-meets-high-end cigar shop" aesthetic. Trained staff called "budtenders" are available to guide consumers through the decision-making process.

It's more than just Christmas: With the prospect of federal intervention in Colorado's legal weed market growing dimmer every day, the industry is already transforming. In just one sign of the changing times, marijuana will soon get its first corporate brand name in the form of a private equity-backed firm named Marley Natural. The company will reportedly try to snag the Whole Foods demographic with products like THC-infused creams and "heirloom Jamaican cannabis" themed after reggae artist Bob Marley.

In this context, a Black Friday for weed doesn't seem so strange. Retailers have to sell big during the holidays, just like with any other consumer product.

"Christmas sales, day-after-Thanksgiving sales, your-family-is-in-town-and-you-need-something-to-get-you-through sales?" University of Denver law professor Sam Kamin told Bloomberg. "None of that would surprise me now that the industry has come out into the open. I would expect to see the industry behaving like any others to the extent that it can."