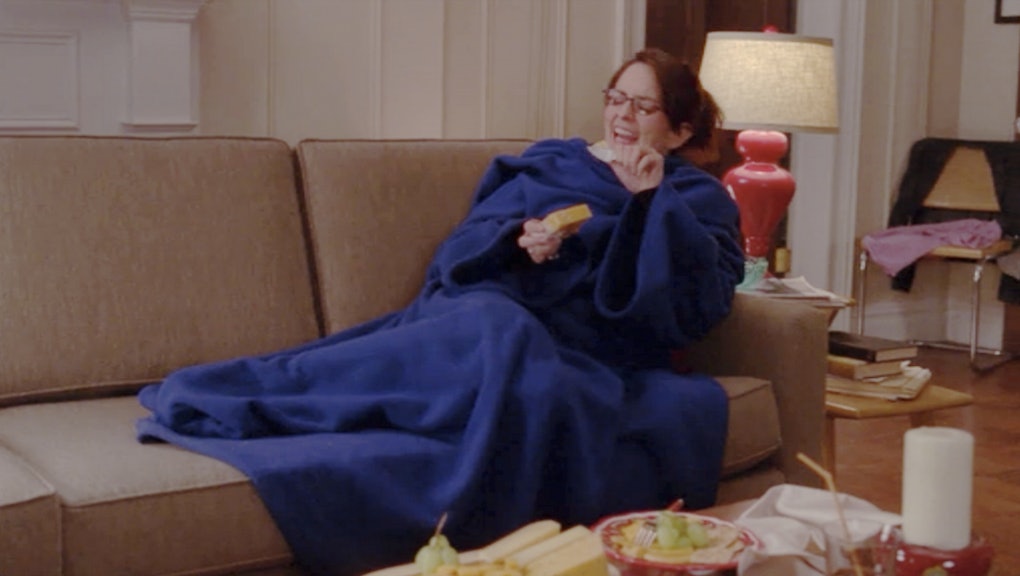 It's Friday, you just endured a brutal 60-hour work week, and all you want to do is crawl into bed and binge on Netflix. But your party-hard friends are pressuring you to go out, using the most ineffective arguments ever. They don't seem to understand that their "blowing off steam" looks a little different than yours.

But according to science, it's you, feeling slightly lame with your sweatpants and take-out, who has the right idea. Because you know what's more important than dancing at clubs or drinking expensive drinks?

Staying in on a Friday night might be an amazing health decision for plenty of us. The majority of 20-somethings are seriously sleep deprived: According to the American Psychological Association, Millennials average fewer hours of sleep a night than older adults, and they are more likely to report that the sleep they do get is poor quality.

That means that staying up late and going to a bar is last thing we need at the end of the week. If someone wakes up at 7 a.m. on Friday, then stays out until 2:00 or 3:00 a.m. that night, they will have been awake for about 20 hours straight.

That likely then leads to a crash on Saturday morning, sleeping well past the typical weekday time of 7 a.m.

Going out totally cramps your sleep cycle. Beyond the sheer exhaustion of staying awake for 20 hours, the problem with late Friday nights is that they throw off your sleep cycle, which can be a problem.

As the National Sleep Foundation explains, "Our internal circadian biological clocks ... regulate the timing of periods of sleepiness and wakefulness throughout the day." If we throw off those clocks, we're getting sleepy (or wide awake) at all the wrong hours, requiring us to readjust back to the time we go to sleep during the workweek.

And "catching up on sleep" on Saturday and Sunday doesn't really work. Sleep medicine specialist Dr. Hal Alpert told Mic it could take "several days and maybe even up to a week or two" for someone to recover from sleep deprivation, meaning a late Friday night could make your Monday morning suck.

All that loss of sleep stresses us out. Those who are inclined to shake off their stressful work week with a late Friday night out a bar are actually stuck in a vicious cycle: Experts say that increased stress levels and sleep deprivation can go hand in hand. Alpert explained to Mic, "When you have a lack of sleep you have a stress reaction, you have increased cortisol levels in your body." It's no shock, then, that Millennials are not only the most sleep-deprived; they're also the most stressed.

And stress does serious damage to our health. Those increases in cortisol Alpert mentioned can have physiological effects including "lower immune function" and an "increase weight gain," according to Psychology Today.

Homebodies have the right idea. If you've made the wise choice to spend Friday night on your couch with a glass of red, you're not alone. A helpful survey by a British bedding company confirmed that, at least in England, more and more people are opting to stay in on Friday nights rather than going out. One in five people of those surveyed make sure "they have nothing planned on a Friday evening, so that they are completely relaxed by the time they slip between the sheets," according to the Daily Mail.

Here's an excellent idea: Instead of heading to that bar or lounge on Friday night, you'll be able to find us at Club Bed. After all, Club Bed is never too crowded and never disappoints.