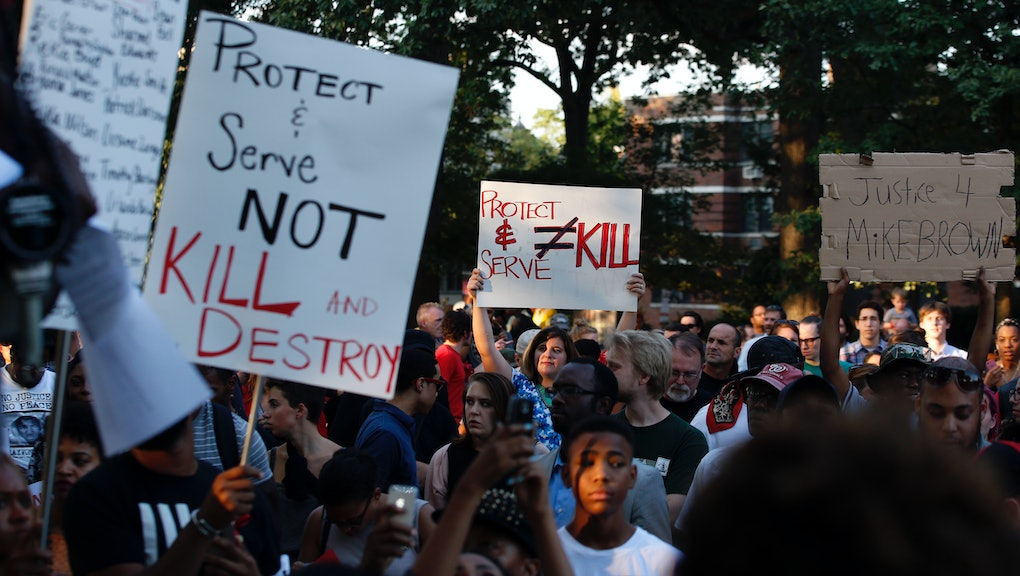 The U.K's Solution to Police Brutality Is Something the U.S. Would Never Consider

This isn't a new idea, yet Americans, especially American politicians, willingly avoid having this specific conversation.

In 2012, 409 out of 410 "justifiable" killings by American police were caused by guns. Conversely, that year in the U.K., there was just one fatality. And in 2013, the Economist reports, "British police officers actually fired their weapons three times. The number of people fatally shot was zero."

Meanwhile, Japan has cut its firearm homicide rate to the low double and sometimes single digits due to restrictive gun laws. Japan's police force does carry guns, but only after submitting to a rigorous training process.

Faith in the police is exactly what America needs right now, especially within minority communities like the black community, which is disproportionately targeted and incarcerated by the criminal justice system. In the St. Louis metro area, which houses Ferguson, the murder of Mike Brown was tragic, but not unique. "A total of 39 people were fatally shot by police officers between 2003 and 2012," reports Mother Jones, citing statistics from the St. Louis Circuit Attorney's office, and "only one police officer has been indicted in such a case since 2000, and that officer was acquitted." It is not surprising given this evidence that some members of the black community say they increasingly feel mistrustful, even hunted.

It's not as if the correlation between gun ownership and gun-related deaths hasn't been well-documented. As Charles M. Blow writes at the New York Times, "Among the [Organization for Economic Co-operation and Development] countries that the World Bank groups as 'high income,' America has the highest gun homicide rate, the highest number of guns per capita and the highest rate of deaths due to assault."

So why is nobody talking about it? Simply put, in America the issue of guns in America — no matter who owns them or what they are intended for — has become hopelessly entangled in the Second Amendment, to the degree that demilitarizing the police is currently considered a political impossibility, "Because the United States has a per capita gun ownership rate that is one of the highest in the Western world, the police must also be heavily militarized," notes the Washington Post.

This is, of course, a circular argument. That the Second Amendment predicates the "right of people to keep and bear arms" on the reality of the ability of a "well-regulated militia" to "secur[e] a free state" signals to gun control advocates, among others, that the amendment is outdated and in want of revision. It was, lest we forget, written (awkwardly and agrammatically) by white men of the 18th century, with 18th-century concerns, who were fighting for independence from England.

Today, America is ostensibly a free state; no militia is needed, as Philip Gulley writes at Salon: "I cannot imagine any circumstance in which our government would urge us to arm ourselves in defense of our country. Our nation has outgrown its need for an armed citizenry. The disadvantages of widespread gun ownership far outweigh any perceived advantage ... Ask African-American residents of Ferguson, Missouri."

And yet: The fact that we can't even consider this statistically proven solution is telling in itself. Taking away the guns won't in itself end police violence. Disarming the police would, of course, not eradicate all police brutality — we need only look to the recent case of Eric Garner, the black man who was killed by an New York police officer using a chokehold earlier this year — but it would be a large step in the right direction.

Regardless, the fact that in America we can't even begin a conversation on the topic without being shouted down by Second Amendment advocates touting patriotism and adherence to what they argue are the Founders' intentions regarding the Constitution is an outrage and a tragedy. If we want significant improvements in the criminal justice system, with the broader desire to eradicate systemic racism and sexism, then radical changes are needed at the institutional level.

"To protect and to serve" should not require a gun. How many more men, women and children will die because of this inflexibility? Apparently, the answer is infinite.