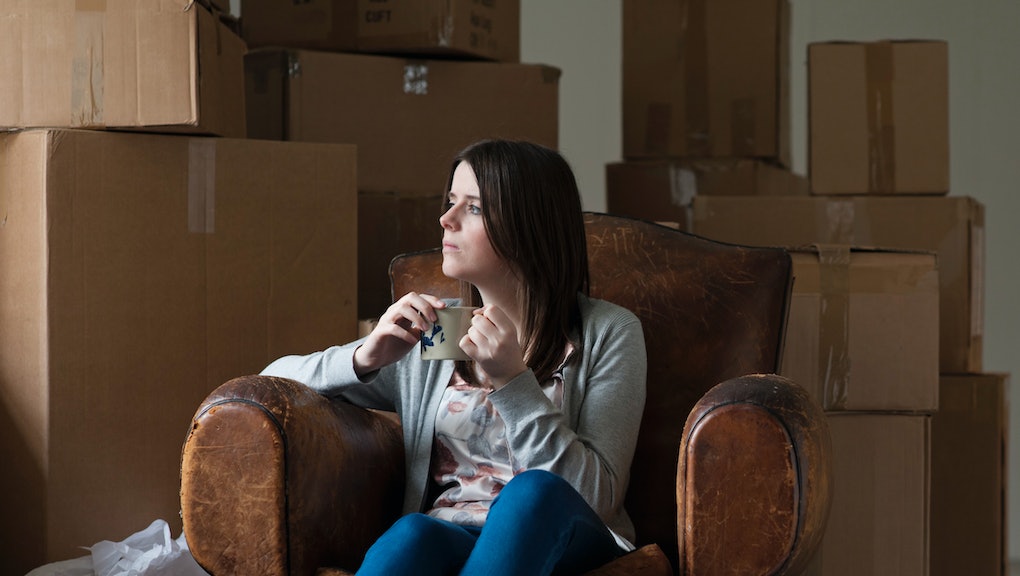 When Getting Cheated On Is Actually a Blessing In Disguise

No one is going to argue that getting cheated on is fun.

So why do people cheat? This question, one that taps into the deepest crevices of human desire and insecurity, has haunted couples since biblical times.

Some theorize it's genetic: One recent study aiming to get to the bottom of cheating found that there might be a gene that predisposes men and women to stray. Others look toward chronology: Those whose ages end with 9 (like 29, 39, 49) were reportedly more likely to cheat. And there's always the significance of human habit: This summer, research found that cheaters are 3.5 times more likely to cheat again.

No matter the reason, getting cheated on burns. But it's possible to emerge from the other side even stronger than before. For those who have been screwed over by a partner (or know someone who has), here are six valuable reminders that getting cheated on has its silver linings, and might even bring about change for the better.

1. You're reminded that you're not alone.

Monogamy is a relatively new concept when we consider mating from an evolutionary perspective. Way back when, it was beneficial for humans to spread their genetic seed far and wide. And judging by the rate of cheating, traces of that mindset might still be with us. According to Helen Fisher, "Current studies of American couples indicate that 20% to 40% of heterosexual married men and 20% to 25% of heterosexual married women will also have an extramarital affair during their lifetime." While the statistics on cheating range widely and are hard to pin down (particularly because people don't always want to admit their infidelities, even to researchers), they're hardly negligible.

And in the digital age, cheating can occur on more platforms than ever before: A 2012 survey of millennials found that just over 1 in 10 young people have used their cell phones to cheat on their partner.

For proof of how widespread and universal cheating it, just listen to pop music. You undoubtedly won't be the only one singing along to Carrie Underwood's tune; it would have been hard for these artists to top the charts without audiences who could relate.

Sure, it feels like the most painful way for your partner to betray you. But their cheating ways might be the best indication of their true colors, not to mention a sign of overall malaise in the relationship. Anthony P. Thompson wrote of the "deficit model," which Fisher describes as determining that "extramarital sex [is] negatively associated with several aspects of relationship satisfaction." If one person in a relationship is lacking something, they will attempt to seek it out with another partner. And if a relationship doesn't meet one person's needs, that's an issue that merits closer inspection.

As divorce coach Betsy Ross wrote in the Huffington Post, "Viewing an affair as a symptom of marital breakdown promotes the possibility that a marriage can be repaired." Which can only happen when ...

3. You learn how to communicate better in the wake of a relationship crisis.

When can an affair have positive outcomes? When it leads to talking though issues. Hanna Rosin discussed the topic with Emily Brown, a therapist and affair expert: "The affair, in Brown's eyes, is a 'wake-up call,' not the 'disaster' the couple sees now, 'but a real opportunity for them to go on a different route and deal with the issues between them.'" Brown goes on to call affairs "the best thing that ever happened" to certain couples.

Indeed, as University of Virginia sociology professor Steven Nock stated, "If you can actually discuss what is going on and why it happened, those couples seem to survive."

And even if you decide to part ways, you certainly emerge with a deeper understanding of the other person and perhaps how to meet their (or a future partner's) needs.

4. You learn a lot about your ability to forgive.

Psychotherapist Abby Rodman reminds us that our lives are going to be chock-full of transgressions and betrayals both big and small. It's how we react to those painful situations that defines us. "Are you the type of person who holds grudges?" Rodman prompts victims of cheating to ask themselves. "Can you forgive the act but not the actor?"

Pop culture and post-cheating hero Jennifer Aniston, who was famously cheated on by Brad Pitt, would agree. The actress told Harper's Bazaar just this month, "Listen, people can do unforgivable things, but you have to let it go and say, 'Look, we're all human beings. We make mistakes.' To hold any kind of resentment is like taking rat poison and waiting for the rat to die."

Matters of grudges and forgiveness are ones you'll undoubtedly encounter again in the future, possibly with friends, family members and co-workers. Exploring them on a dramatic scale might prevent a meltdown in the wake of a smaller trigger later.

5. You're reminded that there are things in life you can't control.

You may feel like a victim of your partner's cheating ways, but it's important to remember that you didn't force them to cheat. Blaming yourself for your ex's actions doesn't get you anywhere; ultimately, they acted out of their own volition. Perhaps she has the "cheating gene"; perhaps his parents modeled an unfaithful relationship for him. "You are free from the burden of that choice, so don't carry around the guilt they may throw at you," one HuffPost Divorce reader advised people in this painful position.

If we reclaim the language with which we discuss the situation, we reclaim self-respect as well. The word cheating treats what happened as childish, errant behavior on their part. You didn't "get cheated on"; your partner was unfaithful. Adultery needn't blame the person who didn't commit it. Which leads us to ...

6. You become stronger than you ever imagined.

People quote Friedrich Nietzsche all the time for a reason: What doesn't kill you really does make you stronger. Singer Rochelle Humes echoed this sentiment in an interview with Cosmopolitan U.K.: "[Being cheated on] made me stronger because I know that it's not [my] fault. If someone disrespects you it's their problem, not yours; there's no point worrying."

And difficult as it can be to look toward the future, Sandra Bullock, whose husband, Jesse James, strayed from their marriage, reminds us that better opportunities await down the road. "We're all where we're supposed to be," the actress told Vogue. "I am exactly where I want to be now. You can't go backward. I'm not going backward. I'm grateful that I'm here, blessed to have what I have."

OK, so maybe you don't feel particularly blessed when getting cheated on. But as with any challenging experience, it provides ample opportunities to grow. And something ending badly doesn't mean something great can't follow; earlier this month, the Pew Research Center found that 4 in 10 new marriages in 2013 were actually re-marriages. Things get better, and people get stronger.