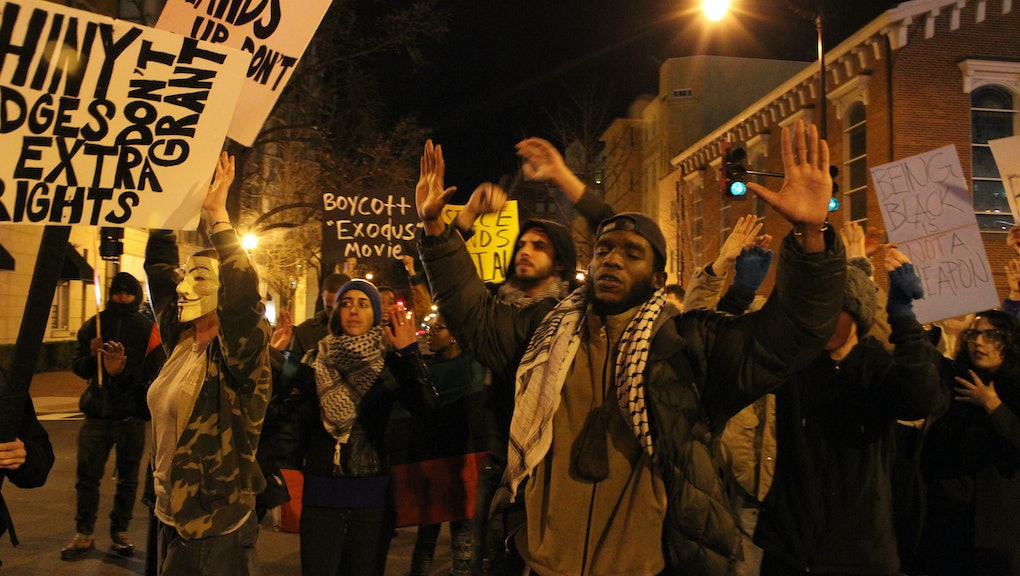 The clearing of Officer Darren Wilson by a grand jury in the shooting death of an unarmed teenager in Ferguson, Missouri, elicited an array of responses from across the United States, but it didn't stop at American shores. News of the decision and the subsequent protests have traveled all the way to Russia, where everyone from state media to Twitter users to the government are gloating over the unrest.

"So the U.S. government, when talking about their own country, forgets about democracy, human rights, protection of 'peaceful protesters' and people's right to protest," Russian news outlet Pravda.ru crowed Tuesday, according to the Washington Post. "As they say, 'the United States — it's a completely different matter.'"

Svobodnaya Pressa, another outlet, termed the protests "AfroMaidan," a racist-sounding play on the Euromaidan demonstrations that swept across Ukraine last year.

It was a similar story on television: "You want to export that kind of democracy?" political scientist Alexander Domrin asked Tuesday on state TV. "Thanks, but no thanks."

According to Mashable, Russian defense analyst Igor Korotchenko told viewers to "draw a conclusion from the two-faced politics of the U.S. ... in one case, [the Americans] fan the flames like they did ... in Ukraine, but in the analogous situation at home, they behave extremely severely. And that is what's called American democracy."

In the ultimate gesture of schadenfreude, the Russian Foreign Ministry posted the following statement on its website (emphasis Mic's):

Experts say that the problem of racism in the U.S. is systematic and is fraught with serious potential for tension and division in society, as evidenced by a series of protests in 2014 in Ferguson. According to analysts, attempts to deal with this "disease" by force, with the use of the military against civilians methods, police special forces, etc., hopeless and, conversely, further drive the situation into a dead end. What happened to the days of Cleveland police killing an African-American child in the playground once again confirms the validity of this thesis.

What's going on here? This is nothing new. Russian media also latched onto the Ferguson story when it first broke in August following Michael Brown's death, touting it as evidence that the United States was a hypocritical, racially divided superpower on the verge of social catastrophe.

But as the Washington Post noted, this wave of coverage — particularly regarding its tenor and popularity among Russian audiences — "is testament to how already tenuous relations between the United States and Russia have worsened since the summer."

"The Ferguson riots have allowed Kremlin propagandists the opportunity to turn the tables on the U.S., getting payback for American support of Ukraine's pro-democracy Euromaidan revolution that began a year ago and touched off the biggest East-West crisis since the Cold War," wrote Mashable's Christopher Miller.

The rest of the world also chimed in. In the U.K., the Guardian ran a story with the headline "'This Is a War Zone Now,'" while a Daily Mirror reporter claimed he was faced with a "chilling death threat" at the hands of rioters.

Canada's Globe and Mail looked at what would come next for its southern neighbor: "After Ferguson, America's Conversation About Race Has Only Just Begun," read one headline.

Meanwhile, in China, Foreign Ministry spokeswoman Hua Chunying said, "I would like to say that there's no such thing as perfection when it comes to human rights regardless of whatever country you're in. ... We have to improve the record of human rights and promote the cause of human rights. We can learn from each other in this area."

Yet as the Washington Post pointed out, the most peculiar coverage may have actually come from America itself:

And the New Yorker — known for its thought-provoking covers — may have the most compelling take of all: