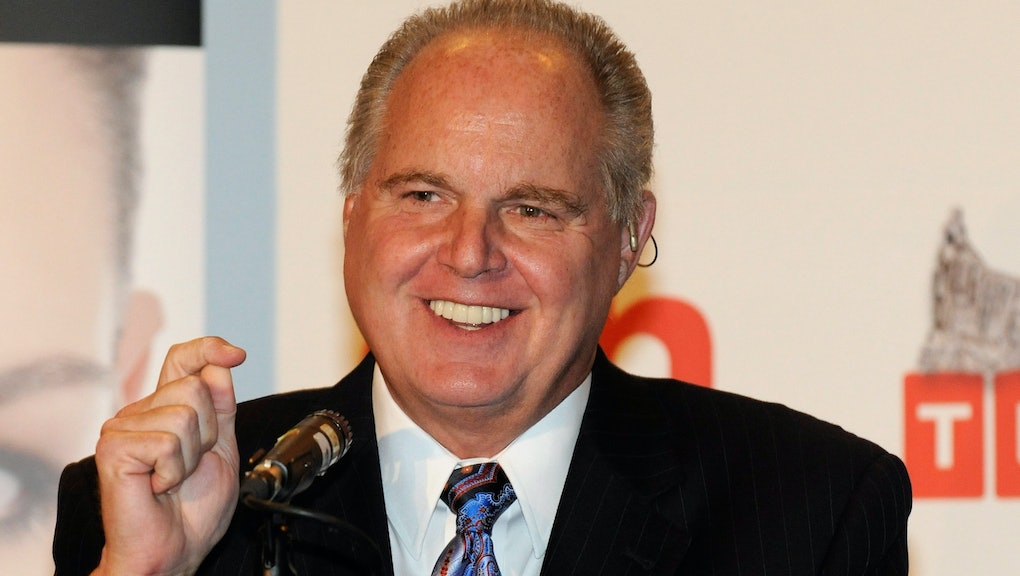 Ah, mansplainers: Men who must explain "difficult" topics to women because, duh, we just don't get them.

While the phenomenon is much older than its recently coined nickname, the moniker was formally introduced to America's lexicon in Rebecca's Solnit's 2008 essay, "Men Explain Things to Me." It was also hilariously catalogued by writer Sarah Jaffe in her Tumblr, "A Taxonomy of Mansplaining." In August, Oxford Dictionary even validated the word by adding it to its online database.

More and more, however, women are calling out out mansplainers on social media — for good reason. Whether found in the halls of Congress, on television, in the classroom or next door, mansplainers are everywhere, and their influence is as insidious as it is infuriating. While it may be cloaked in good intentions, mansplaining implies that women need to be talked down to and patronized, a concept relating back to old stereotypes about the lesser female intelligence.

This was a banner year for mansplainers, who attempted — with varying levels of success — to take control of the dialogue on everything from judicial battles over birth control to increased media coverage of street harassment and sexual assault. Here are some of the year's most egregious examples:

"I am more of an expert and I'll tell you why — because I'm a guy and I know how we think more than you guys," he said. "The bottom line is this ladies: You would not care if all these guys were hot. They would be bolstering your self-esteem and bolstering your ego."

He also offered up this parting gem: "There's nothing more a woman loves to hear than how beautiful she is."

So glad he cleared that up for us.

"Liberals have really failed on the topic of theocracy. They'll criticize white theocracy, they'll criticize Christians. They'll still get agitated over the abortion clinic bombing that happened in 1984. But when you want to talk about the treatment of women and homosexuals and free thinkers and public intellectuals in the Muslim world, I would argue that liberals have failed us."

Notable feminist writer Amanda Marcotte broke down why this comment is inherently wrong: Caring about anti-choice violence does not prevent feminist activists from taking action for women's rights globally. That's not how feminism works. Violence against women — whether it's at an abortion clinic or in the Middle East — should be decried no matter where it occurs.

RH Reality Check's Emily Crockett set off a self-described "kerfluffle" in March when she tweeted about the then-pending Supreme Court case on the Affordable Care Act's birth control mandate (aka Hobby Lobby). Incensed that employers might wrestle control of women's health care decisions, she expressed how "creepy" that scenario would be.

Timothy Lee, a senior editor at Vox who covers technology, responded with his own two cents on the topic, insinuating that the Supreme Court decision wouldn't really affect women, because they're "free" to pay for their own birth control.

This set off a heated discussion on Twitter, with multiple parties weighing in on whether birth control should be fully covered for women.

As Crockett rebutted, "We already pay for birth control, with our monthly insurance premiums and with the labor that earns us our health coverage if we are insured through our employer. ... Premiums aren't cheap, nor is birth control if we don't have insurance; it can easily run from $600 or more per year just for prescriptions, never mind doctor's visits."

"Acculturated" writer Mark Judge wanted women to know he finds catcalling "vulgar and obnoxious." On the other hand, he also wants you to know he finds girls who turn down guys equally distasteful.

We should all, he mansplains in a Sept. 9 article, be made aware of "the way women reject men," and take a lesson on graciously declining pick-up attempts at bars, clubs or what-have-you: "For too many women, raised like the boorish catcallers, without the verbal social skills that allow for pleasant interaction, graciousness is just too much to ask for."

You hear that, ladies? Women should be grateful that a man is paying attention to us at all! In Judge's words, "Tell the would-be suitor that what he did took a fair bit of courage."

Last month, CNN's Don Lemon taught what was called "a master class in how not to talk to a victim of sexual assault" when he asked alleged Bill Cosby victim Joan Tarshis why she didn't prevent her assault by biting the actor's penis.

It should go without saying, but lecturing a rape victim on how she might have avoided the situation is completely unacceptable, insensitive and above all, ignorant.

When Rosetta Project scientist Matt Taylor wore a shirt covered in scantily clad cartoon women during a European Space Agency livestream in November, he was quickly criticized for his clothing's overtly sexist nature.

Thank goodness noted  feminism expert evolutionary biologist Richard Dawkins was there to step in to set the record straight about who was responsible for the "whining" over the fashion faux pas. According to Dawkins, there's no way it could be feminists because "true" feminism has "bigger and better" issues to tackle.

As if public displays of sexism in a heavily male-dominated field aren't worthy of a broader conversation about women and STEM.

When Amazon introduced Amazon Echo, it also released a promotional video showcasing its ease of use by featuring a family of four experimenting with it. Naturally, the male head of the family used the opportunity to prove his own head-of-the-familiness by detailing exactly how the Echo works.

When his wife commands the technology to tell her what time it is — too loudly for his liking — this heroic male role model assumes a condescending tone: "See, you don't actually have to yell at it. It uses far field technology so it can hear you from anywhere in the room."

It's comforting to know at least this type of behavior is consistent. Mansplaining: So simple even a fictional father can do it.

His so-called explanation of consent? "No means yes if you know how to spot it."

Besides Limbaugh's blatant ignorance here, these types of comments are dangerous because of the message they send to potential perpetrators of sexual-based crimes. As Mic's Tom McKay wrote, "It's really not that hard to take a few seconds to confirm that the person you've ended up with at the end of the night actually wants to hook up with you, and it's awful that people like Limbaugh think they don't always have to."

While easy to poke fun at, the fact that men are able to comfortably leverage public platforms to condescend women is not funny. The good news is that women are increasingly picking up on these moments and fighting back. Here's to an empowering — and mansplainer free — 2015.