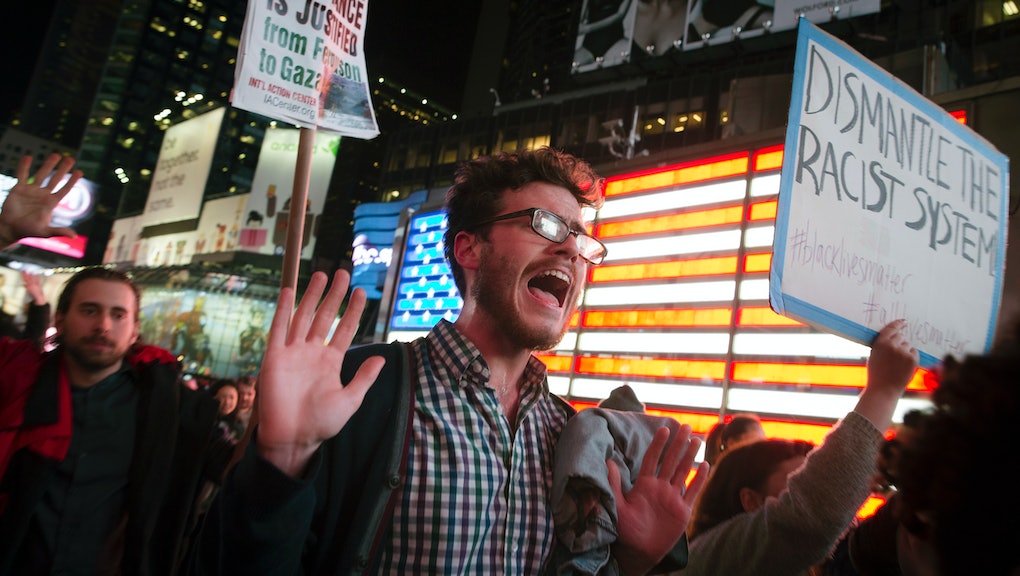 If you witnessed intense debates about the Ferguson decision on social media this week, just wait until you're around family and friends this Thanksgiving.

It's no secret that the decision to not indict Ferguson, Missouri, police Officer Darren Wilson in the shooting death of unarmed teenager Michael Brown has created a divide among many Americans. Discussions about the shooting and its aftermath aren't always comfortable or congenial, and oftentimes they reveal the otherwise hidden biases of people participating in the conversation — especially as it pertains to racism. That doesn't mean an honest dialogue about Ferguson can't be faced head on. But it'd be best to enter into the conversation fully equipped to constructively disarm some of the most common misunderstandings about the situation.

While it's important to enjoy time with family and friends to feast and give thanks, it's crucial for people who understand racism and white privilege to educate their peers. Indeed, it's one of the best ways that white people, and others who aren't black, can help effect lasting change.

So when engaging in those unsettling discussions, here are a few things to keep in mind:

1. Brown did not deserve to be shot and killed.

There's seemingly endless debate over what Brown may have stolen before being shot, and whether or not he was a "good kid." But that's a distraction from the real issue at hand, which is that Brown was an unarmed black man who was shot repeatedly by a white police officer — and it won't even be tried in court. Given the many details surrounding the case, it could have easily gone to a full trial.

Instead, the focus should be on police using excessive force, the racialized way Wilson viewed Brown as a "demon" who looked he was "bulking up," and the reality that unarmed black people get shot and killed by the police on a routine basis.

2. The protesters and the looters are not the same people.

Contrary to popular narratives in the media and online, the people out on the streets to protest are doing so peacefully, following in a long tradition of civil disobedience. They're exercising their constitutional right to address grievances and to do so in a public manner. In fact, many young organizers across the country and in Ferguson have made it their mission to keep this issue at the forefront of mainstream conversations — taking to the streets is just one way they're doing so. But to conflate their efforts with the looting and destruction of property in Ferguson is both misguided and even rooted in racism.

In reality, white people have often rioted, but without the same stigmatization, surveillance or encounters with a militarized police force that black people face. But that's what's happening in Missouri.

3. Wilson isn't the one being punished. He is living and free.

Brown was only one week away from going to college — and that opportunity was taken away from him by an officer's gun. Whereas Brown's family waited more than 100 days only to learn that Wilson would not be indicted in his death, Wilson was able to get married again, be with family and even meet with numerous reporters to decide where he'd share his side of the story. Despite the scrutiny, he will have other opportunities in life that Brown won't.

4. Unarmed black people are shot by the police on a routine basis.

What happened in Ferguson isn't an isolated incident. In fact, this has happened for decades across the country: Police beat, shoot or kill unarmed black people, regardless of the situation or how "good" they are. In the past two weeks alone, Tanesha Anderson, Akai Gurley and Tamir Rice all died at the hands of police officers. And the current conversation hearkens back to just one year ago, when George Zimmerman was acquitted in the death of Trayvon Martin.

It's not just business as usual. The deadly pattern is one that merits more conversation, mindset changes and policy alternatives to bring about lasting solutions.

5. Stop ignoring or excusing away racism. It's still alive and well.

America is not post-race, nor has it ever been. Just because there's a black president, popular black musicians and actors and relatively more racial integration than in the 1960s, that doesn't mean the problem is solved. Indeed, America's social and institutional structures were founded upon and are still fueled by prejudice against black people and other people of color. And if Ferguson is any indication, racial tensions still exist.

The shooting deaths of unarmed black people by police officers is a major issue that merits attention, but it's one of many problems that need to be solved for America to move past racism.