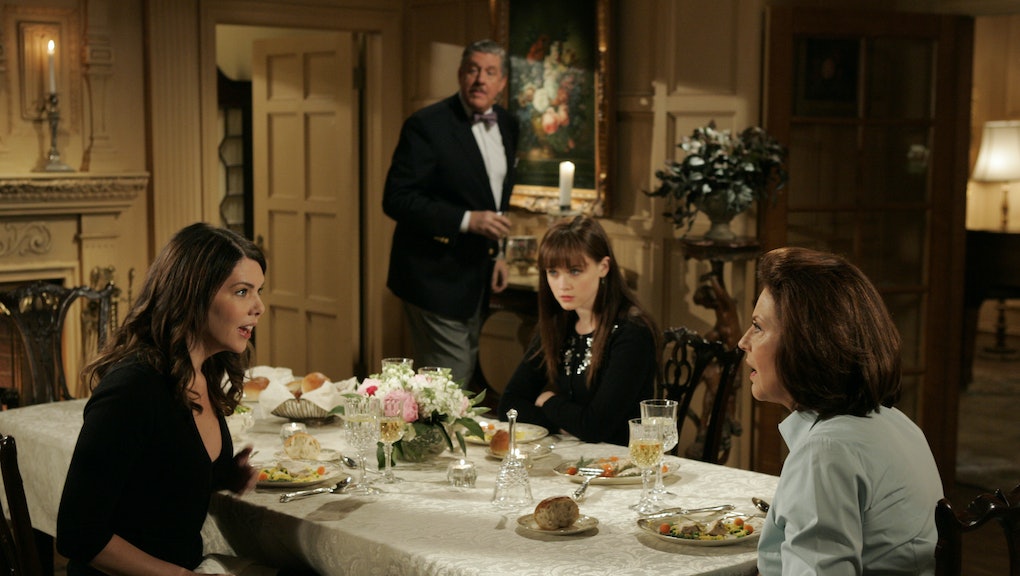 Thanksgiving means turkey and stuffing with a heaping side of questions from your relatives about your love life.

This barrage might include not-so-subtle put-downs about your single status, or prodding questions masquerading as sage dating advice. Or, this year in particular, they might include curious inquiries into the mysterious world of online dating — you may find yourself explaining what Tinder is, and how it differs from OkCupid. And why is everyone else using it to find a partner and not you, dear?

Getting queasy just thinking of the onslaught of questions and criticism? Let us help. Here's a handy guide to navigating the choppy waters of family interrogations — fortifying glass of red wine not included.

Your response: Anyone special? Sure — roommates, friends, co-workers, the barista who prepares your coffee order every morning by heart. "Joy is connection," Harvard University psychiatrist George Vaillant told the Huffington Post. "The more areas in your life you can make connection, the better." Those connections need not be romantic. In fact, not having a "special someone" could mean you're busy building even stronger connections elsewhere.

"The vast majority of singles get emotional and material support or help in everyday duties from their family and friends," author Julita Czernecka wrote in her book Single and the City. No one should be limited to one special person in their life.

"You actually enjoy being single?"

Your response: Enjoy? If only it were so simple. Certainly being single is enjoyable when you want to sprawl out in your bed and watch Netflix for 17 hours straight, less enjoyable when you go ice skating and have to navigate around all the lovey-dovey couples linking arms.

But you can calmly point out that these days, being single isn't that lonely of a status: Single people now make up more than half the American population. According to data from the Bureau of Labor Statistics, 50.2% of adults 16 and older are currently single; back in 1976, that number was 37.4%.

Plus, being "single" — by which everyone always means without spouse or serious significant other — doesn't mean you're not enjoying an active social life. Be firm on this point, then reach for the green beans.

"But don't you want to be dating?"

Your response: Deep breaths. Any sane person knows that wanting to be dating and actually dating are two totally different things. You might want to go out to a nice dinner with a bottle of wine, but the person on the opposite end of the texts might have something else in mind.

But no need to get into all that over pecan pie. Instead, just kindly remind your guests that these days, anyone who wants to be dating can easily take matters into their own hands. Signing up for OkCupid, meeting friends of friends at a bar, reaching out to that old crush on Facebook — we're not limited anymore to sitting at home, waiting for someone to call. We've got modern tools! Speaking of which ...

"So what's the deal with this Tinder business?"

Your response: You knew this was coming. Here we go: Tinder is an app for connecting with single people, which you do based in part on geographic location. No, you can't filter by sensible things like religion and hobbies. Yes, lots of people use it to "hook up." But some people do go on dates from it, though that can be a questionable decision.

But really, the most important thing is that it's really nothing to obsess over. It's not making young people any more sex-obsessed and depraved than they were before it. And no, they shouldn't make profiles on it as an after-dinner activity.

"This living together thing before marriage ... that can't be smart, can it?"

Your response: Actually, it can. The research is divided, but there's no conclusive evidence that living together before marriage will ruin your chance of marital bliss. In fact, more and more couples are cohabiting before marriage; data from the National Survey of Family Growth found that among women ages 19-44, 58% had lived with an opposite-sex unmarried partner. Or, as the Atlantic put it, "Cohabitation has increased by nearly 900 percent over the last 50 years."

So is it healthy or unhealthy? Neither. What makes the difference, studies have shown, is how serious you and your significant other are about the relationship; both being fully committed to a long-term future together bodes well.

With that in mind, you can assure everyone, with a swig of your merlot, that you and your roommate are incredibly committed to each other and the plants you share. So you should be just fine.

"Aren't most of your friends married already?"

Your response: Actually, no. The age of marriage in America has risen to historic highs; the median age for a first marriage, as reported by Pew Research Center in 2011, was 26.5 for women and 28.7 for men — which means half of Americans are actually older than that when they get married. Which makes being married much younger than your late twenties is, in fact, out of the ordinary. Plus, studies have shown again and again that the older you are when you first get married, the lower your chance for divorce.

Then reach for some extra pie, because you're not on a wedding diet.

"Wouldn't you rather have a family instead of a career when you get older?"

Your response: Not necessarily, but it's not about choosing one or the other. Having children, data show, is still incredibly important to young people. According to a 2010 Pew survey, 52% of millennials said being a good parent is "one of the most important things" in life. But we're in less of a rush to get there because we're spending time working on our careers.

And having a solid career can be just as important as having a family. Studies have shown working moms are as happy or even happier than stay-at-home moms; and anecdotally, having working parents can be a positive influence on kids.

Balancing both isn't easy, but it can be done. Just take a look inside the headquarters of Apple or Facebook, where the corporate benefits now include egg freezing so female employees ostensibly don't have to sacrifice career advancement for family.

That said, we wouldn't recommend bringing up egg freezing to your relatives, as the notion might strike them as terrifyingly sci-fi. You can, however, pull up photos of kickass mother and Supreme Court Justice Ruth Bader Ginsburg on your phone. No one doesn't appreciate RBG.

"I know a wonderful young man/lady ... would you mind if I gave them your number?"

Your response: Take one last swig of wine, then tell your guest that it's quite all right — you can easily find them on Tinder.