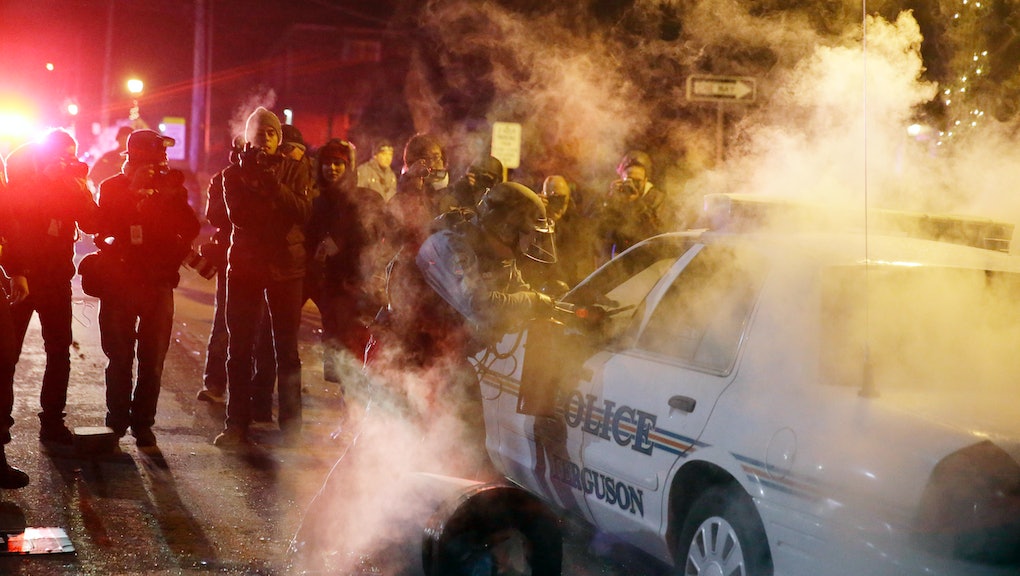 9 Photos of White People Rioting That Put Ferguson into Perspective

Chaos erupted in Ferguson after the announcement of the grand jury ruling Monday night. While officials and community leaders called for calm, the Missouri suburb exploded. Protesters torched buildings, flipped cars and smashed windows. Businesses across town burned to the ground. Rioters fired shots. St. Louis County police arrested 61 people, and at least a dozen were injured in the pandemonium.

Across the country, Americans were glued to televisions, watching protests in Ferguson and beyond. While many anticipated a turbulent response to the grand jury's decision, some reactions capture a deeper problem. Many labeled the protesters savages, animals, hoodlums and thugs. Musician Ted Nugent posted a diatribe online, calling protesters "Ferguson thugs" and describing their actions as "a plague of black violence." Former New York City police Commissioner Bernard Kerik made an appearance on CNN to support the police and their use of force, saying, "You cannot allow people to act like savages, you cannot allow people to act like animals."

As President Barack Obama said Monday evening, this kind of violence and destruction of property is never justified. But the thing is, riots happen all the time, and often over significantly less terrible events — and we talk about them very differently when those involved are white.

Take the riot that broke out last month in Keene, New Hampshire, during a pumpkin festival. Fires were started, cars were flipped and expletives were hurled at cops. Police arrived on the scene with tear gas and pepper spray to contain the riots.

But the American public largely shrugged its shoulders at the incident. After all, white, unruly college kids will be rowdy, right? They're just booze-filled revelers. As CNN commentator Sally Kohn aptly put it, "how is it that the bad behavior of some black people is used to condemn an entire community, while the bad behavior of some white kids is excused and explained away?"

During a rash of rioting by surfers in Huntington Beach, Calif., writer Cord Jefferson satirically asked, "How long must we wait for the white community to get its act together?" After riots in Huntington, Keene, and elsewhere, we rarely see political or media commentary that asks people in the white community to speak out, tells white parents to get their acts together or complains about the "thuggish" values of today's youth.

The vastly different reaction to the Ferguson riots Monday shows, yet again, a troubling discrepancy in how Americans talk about white and black violence. The Ferguson protests are not the same as protests over sporting events or a pumpkin festival (yes, a pumpkin festival) that's spun out of control. The reactions in Ferguson are of a greater intensity because they're driven by entirely different emotions: anxiety, frustration and fear over a case that seemed to sum up decades of racial tension in the St. Louis area.

The riots in Ferguson bear one key difference between the others mentioned: They have a point. The majority of the people flooding the streets aren't just out there for the heck of it, to blow off steam and break things just because. The protests are an effort to create real social change and push voices that usually go unheard to the public's attention.

The fact that we're calling the rioters pushing for that change 'animals' and 'savages' is absurd. Even more absurd is the huge difference in response to white rioting, which we see as rowdiness, and black rioting, which we label violent outbursts.

There is no justification for rioting, looting and the destruction of property. But the way in which many Americans talk about what's happening in Ferguson seems to suggest that sports is a valid reason to riot and destroy property, while anger about systemic injustice, economic oppression and the institutional devaluation of an entire race are not.