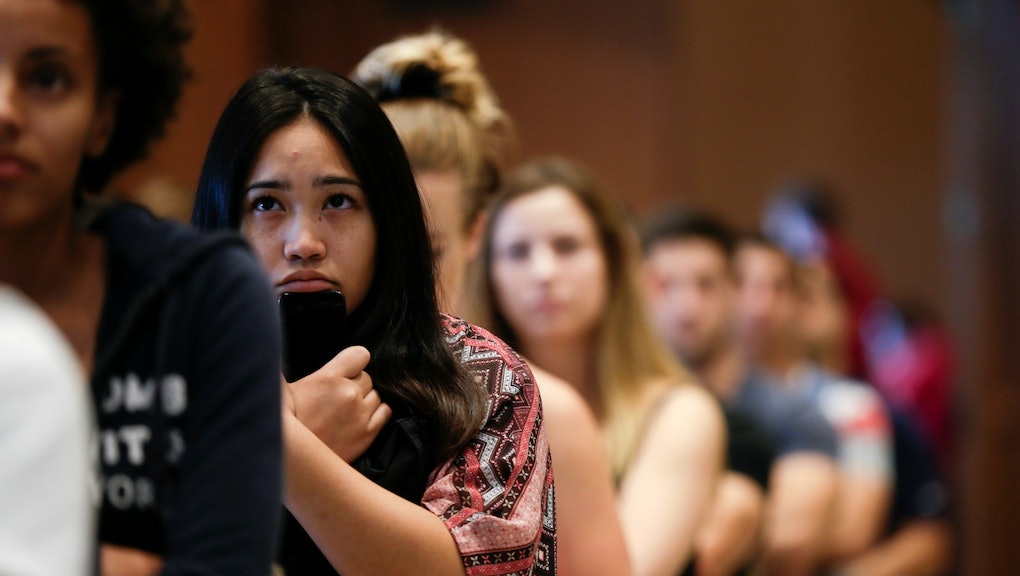 You couldn't make this up if you tried.

The next night, a woman reported she was sexually assaulted at a party near the school's campus; she's the seventh such person to come forward this semester. A few hours after that, a 19-year-old woman alleged that six men attempted to force her into their car.

In response to the deplorable claims, all social events at fraternities have been suspended indefinitely, according to the San Diego Union-Tribune, which was also the first outlet to report on the weekend's incidents.

The decision came from leaders of the school's Greek community after they met with school administrators and the campus Sexual Assault Task Force. "It was time to really address these issues," said J. Cole, president of the Associated Students, in what is perhaps the understatement of the century.

Members of fraternities and sororities on campus will now undergo sexual assault prevention training. "Sexual violence is a problem in fraternities and the Greek system," Tommy Reid, president of the Inter-Fraternity Council, told the Union-Tribune. "We don't want to hide that. ... It's upsetting to admit."

It might be "upsetting to admit," but it's nothing compared to what victims of sexual assault face — a few of whom were reportedly involved in Friday's march.

Busse and others have called upon university officials to go one step further and suspend all fraternities. Such a move would follow a similar decision by the University of Virginia, which elected to shelve its fraternities until January in the wake of a Rolling Stone article that described a gang rape on campus.

"When you're met with that type of language and those types of actions by people who share the campus with you, it was not only disappointing but also very threatening and intimidating," Busse said.

San Diego State University is just the latest school to become publicly embroiled in a scandal involving sexual assault. Besides the aforementioned University of Virginia case, Columbia University senior Emma Sulkowicz made headlines in September for vowing to carry her mattress around campus until her alleged rapist faces punishment. In July, Hobart and William Smith Colleges in New York were the subject of a scathing New York Times investigation that concluded the school was "ill prepared to evaluate an allegation so serious that, if proved in a court of law, would be a felony, with a likely prison sentence."

Meanwhile, 55 schools across the nation are under federal investigation for sexual assault. The Obama administration also recently launched the "It's On Us" initiative to end sexual assault on campus — a much needed effort given that 19% of undergraduate women have experienced attempted or completed sexual assault since beginning college, according to the Centers for Disease Control and Prevention.

And by and large, Greek life seems to be at the center of the storm.

The reported behavior of fraternity brothers at Friday's march — as abhorrent as it appears to be — was not rape. But that doesn't mean it isn't harmful, particularly for victims of prior sexual assault. As the letter of protest noted, the actions constituted rape culture — something that, if left to flourish, only further fosters environments in which sexual assault thrives.

The decision to suspend fraternity social events is certainly a good start. But it's also only that: a start. It's not an endpoint, and it won't magically cure the campus sexual assault epidemic. "Upsetting" as it may be to admit for fraternities, they have a real and serious problem with sexual violence.