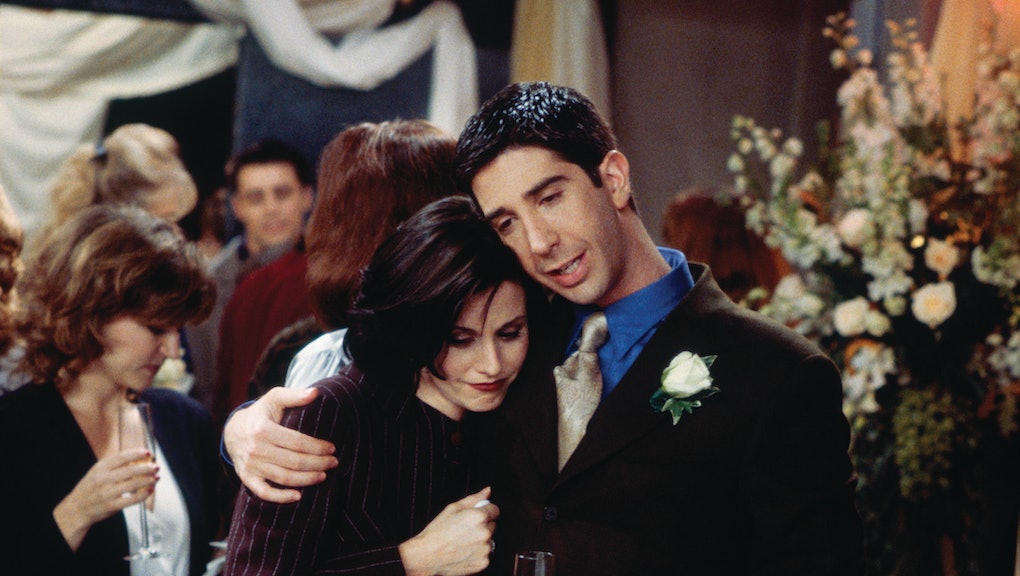 When we're kids, our siblings might as well be our worst enemies. They borrow our clothes without asking, get jealous of our new toys, tattle on us to our parents and are basically the thorn in our youthful sides.

Until they're not. The older we get, the closer many of us grow to our siblings. In fact, a survey of 2,000 adults by British retailer GettingPersonal.co.uk found that 25 was the golden age when "we finally start to feel real love for them after years of fighting, bickering and competing" for our parents' attention.

The phenomenon of getting closer as we get older has been confirmed by science. A study published in the Journal of Adolescent Research in 2005 found that as we get older, we become more independent and separate from our siblings, which actually contributes to increased intimacy and closer bonds. Distance and maturity makes the hearts of 20-somethings grow fonder for their sibs.

Which means now, more than ever, we should appreciate all they've done for us. Go ahead — it will make your parents so happy.

1.  Our siblings contribute to our emotional and psychological health.

Researchers following Chinese individuals born after the country's one-child policy was implemented found that these only children were "not only less trusting, less trustworthy, and more pessimistic, but also less competitive, less conscientious, and more risk-averse," The Scientist's Ruth Williams said. When you have a positive relationship with your sibling, you're less likely to have anxiety and depression, according to professor Clare Stocker from the University of Denver.

Furthermore, your relationship with your sibling closely correlates with your mental health, for good and for bad. A 2007 study in the American Journal of Psychiatry found that poor sibling relationships in childhood could be a predictor of depression in adulthood. (Unfortunately, the study didn't include women in the equation.) But for both sisters and brothers, "some of the "healthiest, happiest, and least lonely people" are the ones with good sibling relationships, says research your mother would love.

2.  Having a sibling helped you have better relationships with others.

As a kid, you inevitably spend a significant amount of time with your siblings. Mostly likely, you learn how to bicker, how to barter and how to argue from them. According to Laurie Kramer, a professor of applied family studies at the University of Illinois, "While these conflicts can be a headache for parents, they can help kids make developmental strides in a 'safe relationship' and provide good training for interacting with peers." Since you're stuck with your sibling (at least for a while), you're stuck with arguing until there is a resolution, thus you learn how to better communicate. Your brother or sister might have actually made you a more compassionate, kinder person.

3. If our siblings are of the opposite sex, they might have helped us in our romantic game.

Growing up with an opposite-sex sibling can help you understand the opposite sex better, apparently. Because you're exposed to your brother or sister's hobbies and interests, some studies say, you're more likely to have a better idea of what the opposite sex likes and wants. Of course, this heteronormative research only applies to heterosexual relationships. But in his book Strangers in a Strange Lab: How Personality Shapes Our Initial Encounters With Others, William Ickes suggests that if you were raised with older siblings of the opposite sex, you were more likely to have easier conversations with romantic interests, and you have better chances of being liked.

Furthermore, one study that shows that people who have siblings (opposite sex or not) are less likely to get divorced. Ohio State University sociology professor Doug Downy, who led the study, suggests that the more siblings you have, the greater chances you will be more equipped to handle a romantic relationship later on: "More siblings means more experience dealing with others, and that seems to provide additional help in dealing with a marriage relationship as an adult."

4.  Our siblings made us smarter.

When you're surrounded by your siblings all the time, you end up learning from them. Researchers from Concordia University suggest that the way siblings learn from each other is very similar to the way students learn from teachers. According to the study, "both older and younger siblings initiate learning activities. ... Siblings acting as teachers use a variety of instructional techniques during those informal lessons." That isn't to say only children are less intelligent or fare more poorly in school. But think about how much your older sibling taught you about music.

5.  Having a sibling around might have made us healthier.

According to Colin Brazier, who wrote Sticking Up For Siblings, having a sibling has been linked to smaller chances of suffering from obesity, allergies and mental health issues. On the obesity front, Brazier explains, having a sibling increases your "energy expenditure" (aka all those afternoons spent chasing each other around) and your calorie intake (possibly from eating more child-sized meals with kids). As for allergies, it also seems logical that if you're exposed to germs as a child via your sibling, you're less likely to develop autoimmune disorders. Brazier said, "The most likely explanation is the Hygiene Hypothesis, which posits that our body's defenses are primed by early exposure to germs, of which siblings provide highly efficient carriers."

And hey, we did get chicken pox over with more quickly by having our sibling around.

6. Our sibs influenced our ambition.

Using a sample of 375 undergraduates, researchers Bernd Carette, Frederik Anseel, and Nico W. Van Yperen showed that "birth order lies at the heart of people's goal preferences, as we found consistent for first borns' preferences for master goals, whereas second borns preferred performance goals." Basically, this means that first-borns are motivated by learning (a goal they set for themselves), whereas second-borns want to win (based on goals set by others). Either way, our siblings influence how we strive to achieve and can even help us reach those goals along the way.

So when you're at the Thanksgiving table, showing a little gratitude for your brother or sister might not be a bad idea. After all, they helped make you the awesome person you are. And you should never stop reminding them of that.