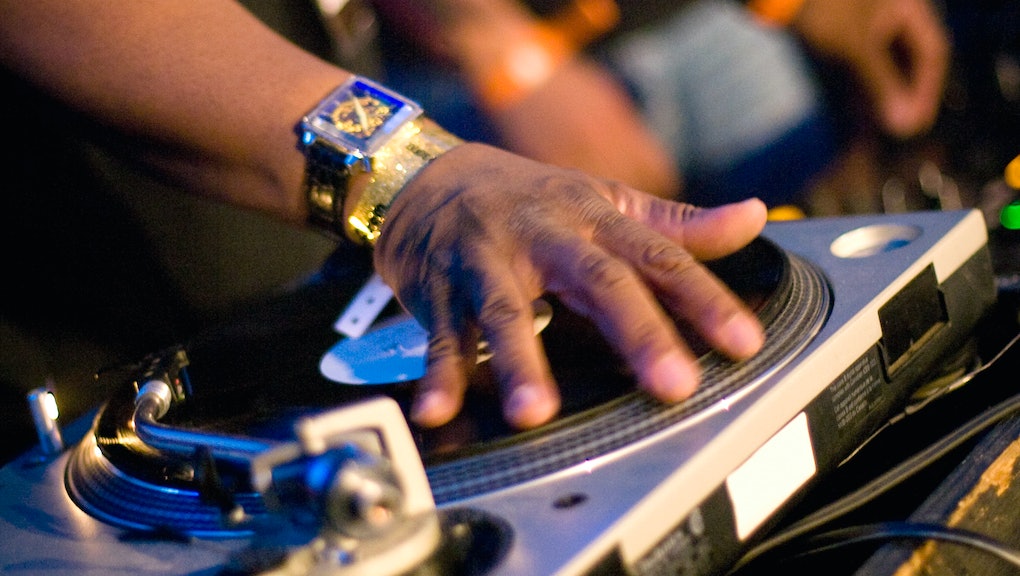 Hip-hop was born with a sample.

Everything we know and love about the genre can be traced to a single moment in 1973. That was when Bronx-born and raised DJ Kool Herc decided to use two turntables to loop series of short soul vocal and drum breaks on top of one another. He only used the funkiest sections of the songs, "the parts of the tracks that everybody waits for," as fellow hip-hop pioneer Afrika Bambaataa described it. Herc called the technique "The Merry Go Round." It was the first hip-hop beat.

Herc's music would fade, but his technique was indelible. Other DJs found their own seven or 15 second samples and continued building beats off them. As the genre took shape, five specific songs became incredibly important to forming all the schools of hip-hop. The website WhoSampled has found that over 5,000 songs borrow a break from at least one of the following five tracks. These segments have been sped up, slowed down and cut up to form the backbones of a wealth of important records.

Though hip-hop has changed tremendously over the decades, these five threads can be traced throughout its history. They've helped establish the deep, interwoven sense of community in hip-hop — the essence of the genre. The constant reinterpretation of these samples is what allows hip-hop to maintain its connection to its roots, even as it surges into new territory. Here are the five songs that keep hip-hop united.

1 . "Change the Beat (Female Version)" by Fab Five Freddy and Beside

According to WhoSampled, the most sampled break in hip-hop is a short five-second scratch and vocal sample that comes right at the end of Fab Five Freddy's "Change The Beat (Female Version)" featuring the French female MC Beside.

Right when the beat cuts out at around 3:37, Freddy says "Ahhhh, this stuff is really fresh" filtering his voice through a vocoder and a white noise carrier to get a warped, watery effect. The distinctive break has been re-worked into over 1,480 songs since.

Scratches from "Change The Beat" make up almost the entirety of the outro to famed '90s duo Eric B & Rakim's "Paid In Full." Critics laud that album as being one of the first and most complex examples of true hip-hop lyricism. It's a fire all MC's have aspired to capture since. Fab Five Freddy's scratches drive the beat on southern party rap group UGK's "Take It Off" and embellish songs like conscious-rap innovator Talib Kweli's "Ready Set Go."

Looking to carry Eric B & Rakim's legacy through in a more direct way, Run The Jewels created a similar outro to "Paid in Full" on its 2013 song "Pew Pew Pew." It uses the same sample, though in a grimier, more dissonant context that better reflects the age of Yeezus. Though the sounds may change, hip-hop's raw ingredients and goals remain constant.

2. "Amen, Brother" by The Winstons

The drum break from The Winston's "Amen, Brother" would have remained esoteric had it not become one of the most recognizable moments from modern hip-hop. Most have likely never heard the original song in full, but everyone will immediately recognize the beat that starts around 1:27.

That beat made up some of hip-hop's original party tracks, such as 2 Live Crew's "Feel Alright Y'All" and Heavy D & The Boyz' "Let It Flow." When hip-hop started to get more aggressive and political as the genre matured, Eric B & Rakim's "Casualties of War" and NWA's "Straight Outta Compton" both used the Amen break to connect with hip-hop's roots while pushing their lyrical content forward into striking new territory.

The beat still pops up here and there today, as on Lupe Fiasco's "Streets on Fire" or Big K.R.I.T.'s "Red Eye." Some producers have chopped it up and slowed it down to an almost unrecognizable point, as on Tyler, the Creator's "Pigs."

Even when the beat is twisted, though, songs featuring this sample still reinforce that prized sense of community within the genre.

The hook on Lyn Collins' "Think (About It)" is affectionately known as the Yeah! Woo! break. Famed soul producer and bandleader Bobby Byrd sings the "Yeah!" and James Brown hits "Woo!" Both were present during the recording of the song and helped Collins produce and arrange the track. The sample starts around 1:26.

It's the prototypical old school hip-hop beat. It was likely first used all the way back in 1987 on The Cookie Crew's "Females," though it first reached the wider hip-hop audiences as a part the song "It Takes Two" by MC Rob Base and DJ E-Z Rock. That song is built entirely from various breaks found in Collins' "Think."

That classic "Woo!" vocal sample still appears today as a way to create an energized atmosphere, as on Kanye West's "Lost In The World" and Black Eyed Pea's "Pump It Harder."

The drum samples also appear frequently, often as a deliberate way to harken back to the old school. Nicki Minaj used it for a soul breakdown to keep a bit of hip-hop flair in her otherwise absurdly electro "Check It Out" featuring will.i.am. Dizzee Rascal, one of the pioneers of U.K. grime-style hip-hop, used the beat to show he could still flow like the OGs on "Pussyole (Old Skool)."

James Brown essentially invented the funk and soul drum break, thus he's the godfather of not only soul, but hip-hop as well. He developed that signature "funk" feel that highlights a complex syncopated interplay between kick and snare drums, before coming down heavy on the one to reset. Like the "Amen, Brother" break, the drum break from "Funky Drummer" starting at 5:36 should be recognizable to all hip-hop lovers.

The sample has always had a hardcore connotation. Two of its most noteworthy appearances occurred in Public Enemy's "Fight The Power," one of the earliest and most radical political hip-hop songs, and Boogie Down Productions' "South Bronx." That song appears on the Boogie Down album Criminal Minded, which is essentially the first proto-gangster rap album. The beat appears in the breaks between verses in NWA's revolutionary "Fuck Tha Police." And Dr. Dre reinforced the gangster connotations of the beat by using it for The Chronic's final single, "Let Me Ride."

Later in the early '00s conscious rappers used the same beat as a way to try to push back on the rampant gangsterism they felt was dragging hip-hop into self-destructive territory. Lupe Fiasco used the beat for the title track off his statement-making The Cool, which encouraged MCs to cool the gunplay and get back to the music. Nas sampled the beat for "Get Down," which also revealed the deadly consequences of hip-hop-sanctioned gangsterism. The song makes a frequent pun between "get down" as ducking from gunshots and "get down" as James Brown originally intended it, as an ad-lib to keep the dancefloor lively.

"La Di Da Di" contributes to hip-hop history in a slightly different way than the other fundamental samples. It doesn't appear as a direct vocal sample most of the time, but it's found its way to the core of hip-hop slang.

"[I]t's literally like chapter one of the hip-hop DJ bible," producer Mark Ronson told NPR in a recent interview, "[Y]ou can play all five minutes of it on a dance floor and have the entire dance floor sing every word of that song. It's almost like the national anthem or alphabet song of hip-hop."

Almost every one of the highly quotable lines have been borrowed and reappropriated as the basis of entire songs. The Beastie Boys borrowed Rick's line "And we go a little something like this — hit it!" to form the basis of their first single, "Hold It Now, Hit It." The line "La di da di, we likes to party," forms the backbone for "Lodi Dodi" by Snoop Dogg, who imbued that ad-lib with a drug-drenched vibe. And "Ricky, Ricky, Ricky, can't you see, sometimes your words just hypnotize me" became Biggie's infamous "Biggie, Biggie, Biggie" hook on the song "Hypnotize."

Slang from the track has also started creeping into other genres such as pop and R&B, as noted in NPR's compilation of sampled snippets. It appears in Beyoncé's "Party," Psy's "Seventy Seven 101" and Miley Cyrus' "We Can't Stop."

The influence of hip-hop slang and sounds is spreading. But the appeal of these samples isn't that they're broadening hip-hop's range — it's exactly the opposite. Hip-hop is a referential music about the experiences of the people who love and make hip-hop. Keeping these five songs in focus across the genre's 40-plus year history has only helped rappers keep the core of their music alive. Because hip-hop is all about community.