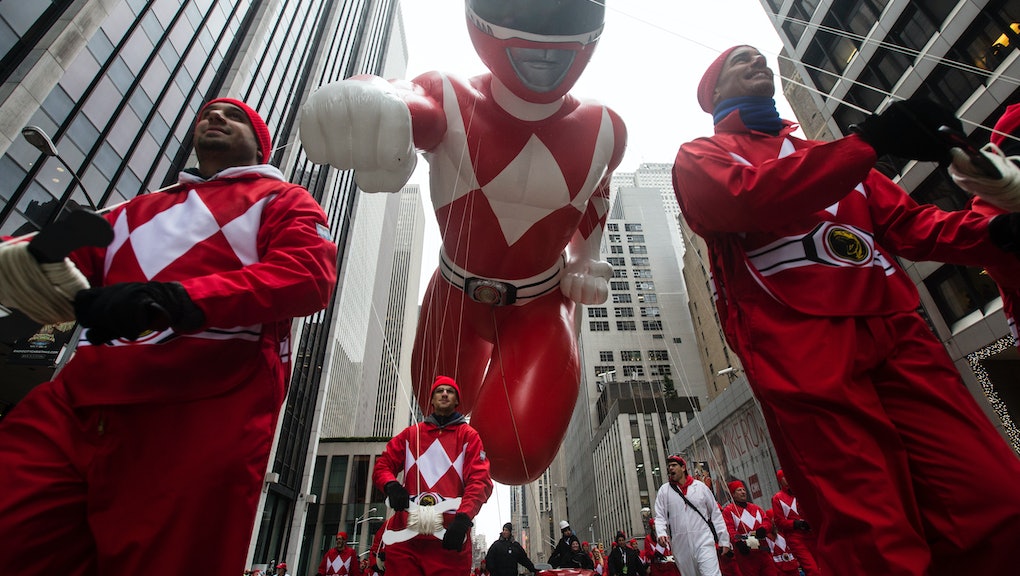 Five Surprising Traditions That Prove Thanksgiving Is the Strangest Holiday Ever

Thanksgiving celebrations may seems timeless, but the quintessential American holiday isn't immune to the wear-and-tear of time. Since it was made a federal holiday by President Lincoln in 1863, Thanksgiving has undergone an outright bizarre series of shifts in traditions, themes and tones.

Here's a look back at some of those older — and weirder — Thanksgiving traditions, including some that persist today.

Before Thanksgiving, there was the ultra-creepy Ragamuffin Day, when children would dress up like hobos and seek out a holiday treat.

The tradition began in the 1700s, when homeless men began dressing in women's clothing while begging for money or food. Children would paint their faces with coal dust and dress in rags and masks, going door-to-door in a precursor to trick-or-treating. Adults, also in costume, would attend masked Thanksgiving balls.

According to NPR (and common sense), it was "weird." In 1899, the New York Times observed with some fascination the sheer variety of costumes, much of it that we would now consider oddly nationalist or outright racist: "There were Fausts, Filipinos, Mephistos, Boers, Uncle Sams, John Bulls, Harlequins, bandits, sailors, soldiers in khaki suits." In 1911, a columnist wrote that "[h]orns and rattles are worked overtime. The throwing of confetti and even flour on pedestrians is an allowable pastime."

Ragamuffin Day's reign of terror ended in 1941, when President Roosevelt and Congress cemented the date that's now Thanksgiving. Many of its traditions merged with Halloween, although the coal dust thing was mercifully abandoned.

In the 1950s, the U.S. government was keeping itself busy by generously funding propaganda that encouraged family values and wholesome Christian living, pushing everyday Americans to celebrate capitalism above all else. In the above clip from 1951's A Day of Thanksgiving, a stalwart dad explains the virtues of liberal democracy in the face of poverty. The Johnson family doesn't have two nickels to rub together in the service of buying a Thanksgiving turkey, but the family patriarch insists everyone at home is still better off than those goddamn commies.

"Do you know," Mr. Johnson says, "that there are some places in the world today where you have to get along without just about everything else?" Of course, it turns out that everyone at the table has something to be thankful for — courtesy of Uncle Sam. One of his kids is thankful that American schools have relatively nice textbooks, rather than the book-burning rallies widespread in fascist Germany. Another is thankful the U.S. doesn't have to fear mass starvation. Johnson's wife is thankful for the free market, which churns out affordable consumer goods like washing machines and cars.

Johnson himself is, ironically, thankful for America's free press and open political system. As the Atlantic's Kathy Gilsinan points out, at the same time this film was being made, U.S. troops were fighting communists in Korea and Congress was descending into McCarthyism. Still, white middle-class Americans could legitimately be thankful to enjoy what was then the modern world's highest standard of living.

Thanksgiving in a warzone

Appeals to suburban families were joined by newsreels about how "our boys in Korea" were managing to enjoy some semblance of Thanksgiving in foxholes half a world away. In this clip, also from 1951, the "Chinese Reds" are on the march. But machine gunners gratefully gorge themselves on heaping portions of turkey and mashed potatoes — "a pleasant interlude [that] brings a touch of home to the icy wastes of Korea."

Americans might be surprised to learn that both North and South Korea celebrate their own harvest festival, named Chuseok, though it's three months earlier, in August. Images of U.S. troops celebrating Thanksgiving overseas remains an American tradition, though today soldiers are more likely to Skype with their families or stream festivities as a unit than appear in old-timey military propaganda.

Here are Union officers doing it during the Civil War:

Praying at the table

Thanksgiving is a nationalist holiday — Christianity is only involved insofar as it fleshes out the mythology of North America's Pilgrim settlers. The holiday is getting even more secular, with 1 in 4 millennials now religiously unaffiliated. The American Humanist Association writes that the secular Thanksgiving is a more modern conception of a holiday that used to carry much deeper religious overtones. It's not a coincidence that Americans often celebrate Turkey Day with reverential traditions that resemble religious rituals.

But for many Americans, Thanksgiving is still a good opportunity to give thanks to the creator. On Thanksgiving, according to NPR, "the Johnny Appleseed blessing and Doxology, a Christian hymn, are particularly popular." Many Christians believe the holiday is inherently religious thanks to the (ostensible) Christian background of many American settlers and early nationalists.

Other religious groups are, unsurprisingly, less interested in the religious aspects of Turkey Day. For example, some conservative Muslims believe celebrating secular holidays is prohibited, while others insist there's no scriptural prohibition on it. In New York, there's a brisk market in halal poultry.

In 1939, President Roosevelt moved Thanksgiving back a week to prop up the faltering national economy. It, understandably, backfired. FDR angered Americans who had to reschedule their holiday traveling, and 16 states outright refused to reschedule on the president's whims. Two years later, Congress and the president moved Thanksgiving to the day it is now, the fourth Thursday of November.

Due to an error in the editing process, a previous version of this story did not include quotes around "the Johnny Appleseed blessing and Christian hymns are particularly common." The story has been updated to fully attribute NPR's language.