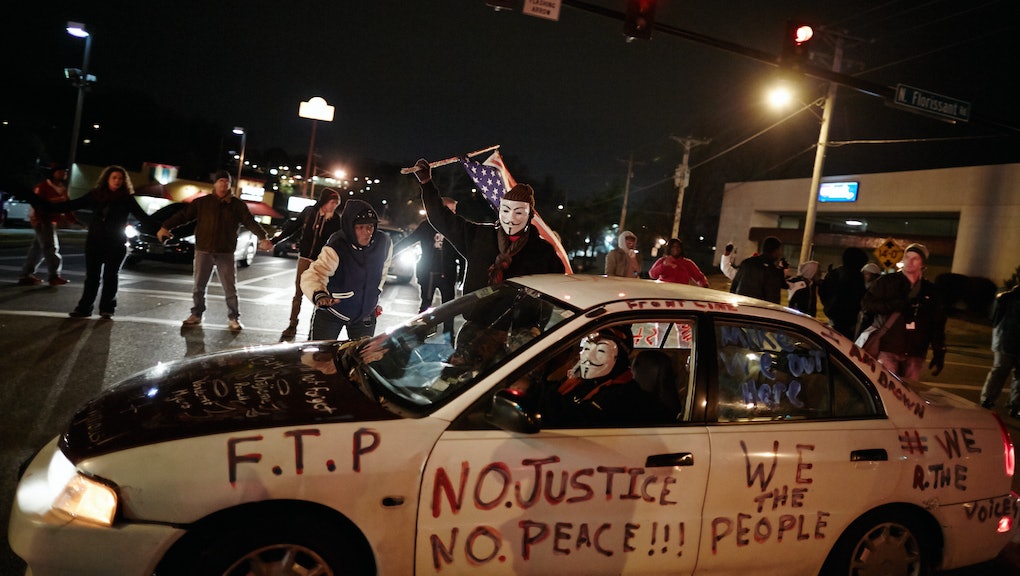 30 Brief Thoughts After Witnessing What Happened in Ferguson Firsthand

1. On Nov. 24, the suburb of Ferguson, Missouri, erupted in violence.

2. Officer Darren Wilson of the local police department had killed an unarmed 18-year-old named Michael Brown in August, and last Monday night, a grand jury decided not to charge him with murder.

3. Brown was black. He was unarmed and allegedly had his hands in the air when six bullets ended his life. The decision to let his killer walk quickly escalated into a night of protests, property destruction and police violence witnessed by the entire country live on national TV.

4. People are trying to make Ferguson about other things, like burned buildings and lost business, but there's one thing everyone needs to remember: This happened because a boy was killed — shot in front of his grandma's home and left in the street for hours. This is the most important part.

5. I was less than 10 feet away from Lesley McSpadden when she found out her son's killer would go free. When the announcement came, she crumpled to the concrete and started wailing. Never in my life have I seen so much pain on another person's face.

6. A videographer from a major news organization did what videographers are trained to do: Ran up to McSpadden and stuck his camera in her face. But a group of her friends blocked his view. "This is not a freak show," one shouted at him. "These are people's real fucking lives."

7. Everything was different after that. Walking down West Florissant Avenue while shops were being gutted and set ablaze, I couldn't help but think of how easily the next day's dialogue would veer into shaming this response, criticizing people for reacting violently to a place and a system that showed them nothing but contempt — especially that night.

8. In short, the whole point would be missed.

9. Come Tuesday morning, few people would be discussing the smirk on Prosecuting Attorney Robert McCulloch's face when he announced Wilson's exoneration. Few would be talking about the remarkable week of nonviolent protests that preceded last Monday night. Few would be talking about the absurdity of police squadrons rolling through middle America in armored trucks and riot gear, firing tear gas at unarmed citizens.

10. And few would be talking about a system that justifies killing black people based on the fear we elicit in others, simply by existing.

11. But I was only half right. Despite the media's dogged focus on burning and looting, the unity and dissent this tragedy has prompted is remarkable.

12. Every night since Monday, there have been protests in St. Louis — nonviolent, of course, until cops get involved. Hundreds of demonstrators have been arrested in Los Angeles. Oakland, California, New York, Seattle, Atlanta — all these cities and more are taking to the streets and standing with the people of Ferguson.

13. Lawyers, activists, organizers have found a common cause ensuring black life is valued unequivocally and without exception in America.

14. But unless we continue to stare this issue directly in the face, we risk its inevitable recurrence.

15. And remember what's at stake: Canfield Green Apartments, Ferguson, Missouri. Mike Brown's memorial holds a quiet but devastating power. Cars slow down out of respect when they pass, and the childhood trinkets adorning it — teddy bears, ball caps, Hot Wheels cars — are sobering reminders of how cheap black life can be in this country.

16. This much has become clear: Youth is not a shield. Being young will not protect you. If the police decide to kill you as a black person in America, they'll kill you no matter what.

17. Then, of course, there's what happened that night. There's the play-by-play, how that first police cruiser was on fire within an hour after the announcement. There's the popping noise it made as it burned, its horn screaming like someone was leaning on it. There's the group of boys who turned the cement blocks they'd crushed into mobile projectiles, hurling them sideways as the police line advanced, shards sailing through storefronts in graceless arcs.

19. But then there's the unexpected. One thing I didn't anticipate: the emotional exhaustion that comes with just watching armies of white police officers point shotguns and fire chemical weapons at black teenagers, black mothers, black children, for days and days and days on end.

20. There are few things as deflating, but you won't find a better lesson in American history. I was only in Ferguson a little over a week. Imagine living there while this is happening.

21. Meanwhile, amid all the unrest, a somber-faced Wilson goes on ABC and tells America he'd do it again. "It looks like a demon, that's how angry he looked," Wilson told George Stephanopoulos, equating grabbing Brown's arm that day to "a 5-year-old holding onto Hulk Hogan." Wilson is 6'4", 210 pounds. "I have a clean conscience," he says.

22. And lastly, of course, there's the news coverage — three months of activity means nearly everyone in Ferguson is a media veteran. This manifests differently for different people: For some, it means the ability to turn around mid-rally and drop perfect sound bites for the camera suddenly aimed at your face without missing a beat.

23. For others, it elicits hostility. I remember walking past the CNN crew on Monday night and seeing a woman scream at Don Lemon, who may have been on camera at the time. "Fuck CNN," she shouted. "You're exploiting our pain." Another man muttered about how none of these news crews were here 100 days ago when things started. "Don't profit off my struggle," he said.

24. But for most, it means wearily conceding that your hometown is now in the national spotlight, and your life moving forward will be reduced to helicopter shots of burning buildings on the evening news.

25. They don't want this. It sounds cliche, but it really shouldn't have to be this way.

26. Of course, former New York mayor Rudy Giuliani thinks he knows the solution: "Ninety-three percent of blacks are killed by other blacks," he said on MSNBC the other day. "I would like to see the attention paid to that that you are paying to this."

27. As we were walking the aisles of local shops, a masked kid leaving the store with a bag of goods found out we were reporters. "Let them know we shut shit the fuck down," he said. A cop car was parked across the street, watching. Nobody even blinked.

28. A final anecdote: Our first stop when we arrived in Ferguson was the Walgreens at Florissant and Hereford. We needed thermal underwear — it was 18 degrees and we'd only packed sweatshirts and fall jackets. The man buying cigarettes behind us said, "If they don't indict the cop, you might see some action [around here]." One week later, that Walgreens looked like this:

29. There is hope, I believe. But it's hard to see it when people are so focused on talking about everything but the fact that a boy was killed here. This is about Mike Brown, first and foremost — everything else is secondary.

30. My last night in Ferguson, an activist I met sent me a text detailing the following exchange: She was begging a group of young black men not to "burn up our neighborhood" on Monday night, when one gave her this chilling response. "This ain't our neighborhood," he said. "They don't even want us here. So why not have our fun until they shoot us?"

This is America in 2014. Never forget what happened here.