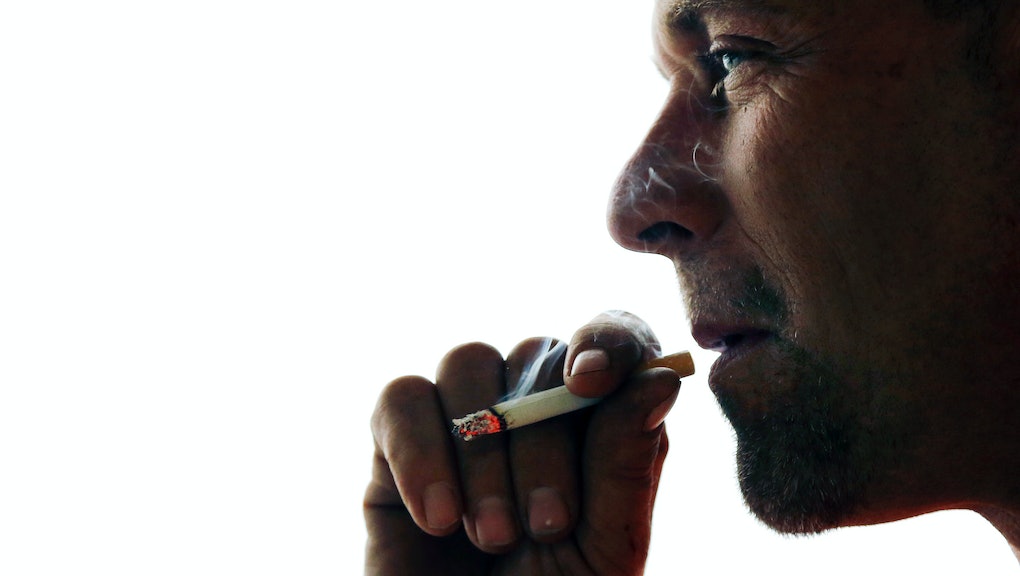 The news: Americans are putting out their cigarettes for good.

A new survey from the Centers for Disease Control and Prevention shows that in 2013 just 17.8% of the country's adults, or 42.1 million people, smoked cigarettes. This marks a major decrease from previous years — in 2005, 20.9% of adults smoked cigarettes — and it's the smallest percentage of adult smokers since the CDC started recording the number in 1965.

This steady decline is a move in the right direction as the Department of Health and Human Services tries to meet its 2020 goal of reducing cigarette smoking to 12% of the population.

Furthermore, the adults who are still smoking reported they are smoking fewer cigarettes. People who smoked daily lit up an average of 16.7 cigarettes a day in 2007, but now only smoke an average of 14.2 (which is still bad — just not as bad).

Though it's not entirely clear if there's one or several motivating factors behind this drop, the New York Times cites smoke-free locales and the federal smoking tax increase in 2009 as likely reasons. Smokeless restaurants, bars and offices make it easier for smokers to quit.

Taxes and rising cigarette prices offer a financial incentive to quit the habit, and the increased rules and regulations for cigarette advertising has made it more difficult for Big Tobacco hook new customers.

A couple of caveats: The percentages don't include cigar smoking or vaping — the latter of which has become so culturally relevant it was the Oxford Dictionary's word of the year in 2014. Still, vaping remains a small market compared with traditional smokes.

Furthermore, the percentage of smokers among multiracial adults (meaning they reported more than one race on the survey) actually increased from 2012, rising to 26.8% in 2013 from 26.1% in 2012. The percentage of adults smoking cigarettes who live below the poverty line increased from 2012 as well. Just over 28% of low-income adults smoked in 2012, but in 2013 that number rose to 29.2%. It's unclear as to why this happened. Contributing factors are likely their limited access to nutritious food and a lack of time in their hellish work schedules. These increases shouldn't be ignored, despite the overall downward trend.

The takeaway: The decline of smoking proves the nation can slay its health dragons with enough effort. If smoking, a ubiquitous fixture of American life at one point, can be felled, perhaps we can take on sugar and fast food, too.