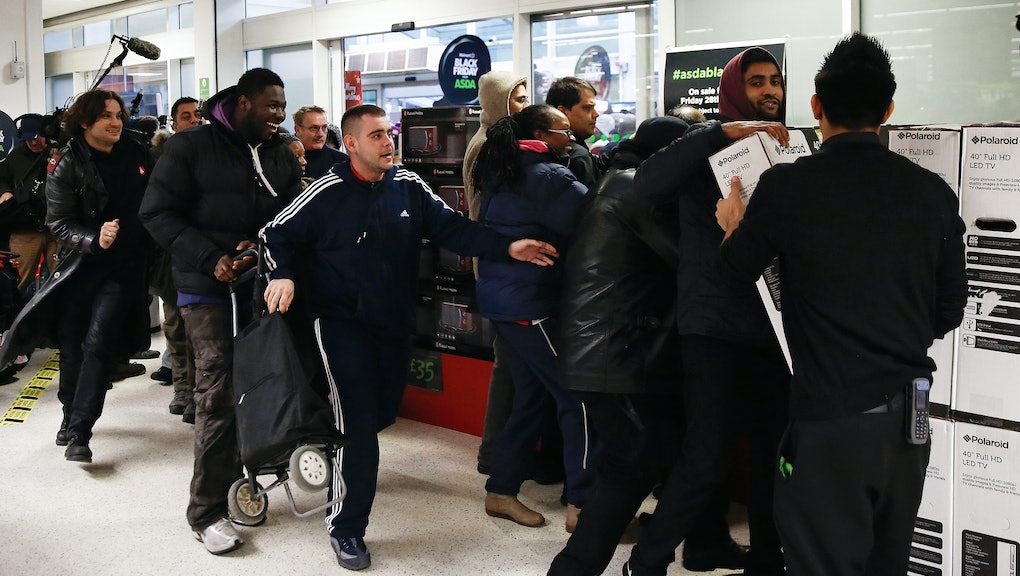 America Exported Black Friday to the UK — and It's Awful

It's a scene we've come to expect: Five people, disheveled and sleep-deprived, decide to settle the question of who "called" the Samsung flat-screen TV first by screaming and wrestling in public, the disputed set being fought over like a bag of Hurricane Chow. This time, however, the viral video making us question our humanity wasn't shot in a Wal-Mart in the States but in a London supermarket.

America has exported Black Friday to the United Kingdom. God save the Queen.

How is that possible? After all, Black Friday refers to the day after Thanksgiving, a specifically American holiday. According to the Economist, Amazon claims to have introduced the concept of slashing prices to boost sales and officially begin the holiday shopping season in 2010, although it wasn't until 2013 that Asda, a British supermarket chain, joined in. This year, the shopping day is bigger than ever, with cheerleaders, arrests and screaming matches over consumer goods.

From the looks of it, British retailers had no idea what they were in for, and the customer rap sheets prove it. One Tesco supermarket had to be closed just 36 minutes after opening. A customer was arrested at another branch for telling a staff member that he would "smash your face in." A fight broke out at a different location after teenagers started throwing Advent calendars, and staffers have reportedly been leaving work in tears. Even Tesco's website has been down for hours as online shoppers desperately bid for televisions discounted by $95.

More scenes from the anarchy:

If Brits think this is bad, just wait until Boxing Day.