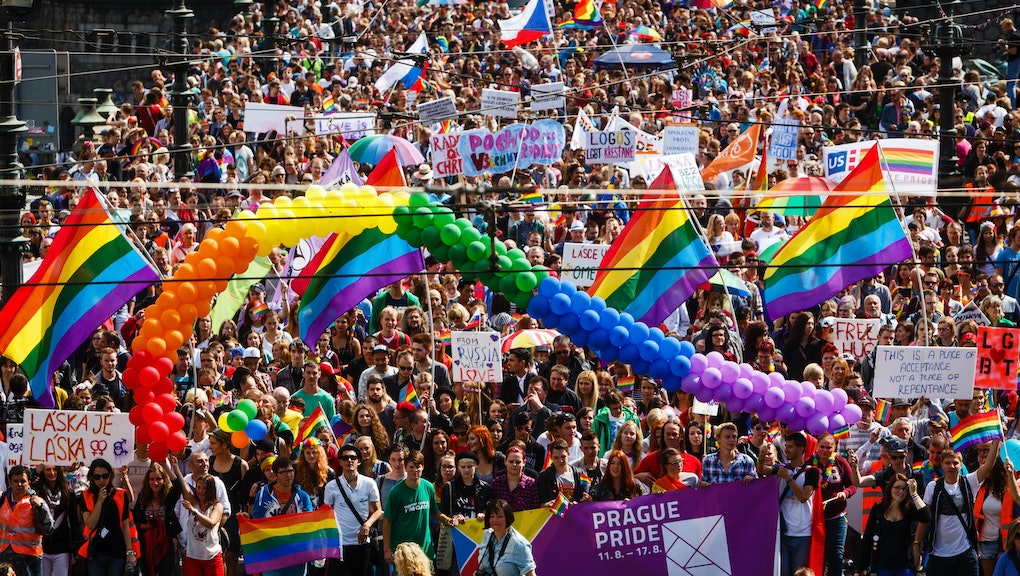 The 7 Biggest Victories for LGBT Rights in 2014

While the Sochi Olympics may have been a depressing start for the international LGBT community in 2014,  overshadowed as they were by Russia's homophobic policies, this year has turned out to be a pretty epic one for LGBT advocates.

Both in the United States and abroad, the LGBT community has garnered a slew of legislative, judicial and cultural victories in its fight for equal rights. The following are some of the biggest wins this year:

1. Gay and lesbian couples can now get married in 35 states and counting:

Marriage is legally important because it affords 1,138 rights, benefits and protections. And homosexual couples deserve those protections just as much as heterosexual couples. Just last week, Mississippi became the 35th state to legalize same-sex marriage. Judges are making change happen where voters or elected representatives will not. As the New York Times reported: "In the past two months, the number of states allowing same-sex marriage grew to 35 from 19, as well as the District of Columbia. The surge was entirely the result of court decisions." The Supreme Court, for its part, has refused both to hear appellate cases and block affirmative same-sex marriage decisions.

On an international level, Finland became the  12th European nation to legalize same-sex marriage when it passed its gay marriage law at the end of November. A handful of other countries, including Mexico, approved same-sex marriage laws as well. And countries like Slovakia, Australia and Colombia are slated to vote on the matter in the coming year.

2. The LGBT community gained the official support of the United Nations:

This September, the U.N. passed a resolution condemning violence and discrimination against people based on gender identity or sexual orientation by a vote of 25-14 (with seven countries abstaining from the vote). While not effectual policy, the resolution was hugely symbolic in light of spread of homophobia and gender-related violence in countries like Uganda, Russia and India in recent years. The resolution is dedicated to:

"Expressing grave concern at acts of violence and discrimination, in all regions of the world, committed against individuals because of their sexual orientation and gender identity ... [and]  welcoming positive developments at the international, regional and national levels in the fight against violence and discrimination based on sexual orientation and gender identity."

Obama signed two important executive orders in 2014 designed to expand protections for the LGBT community. The first happened in July, when Obama signed an order outlawing federal contractors from discriminating against a person's gender identity or sexual orientation. ThinkProgress observed that this order "reach[ed] over 1 million LGBT workers across the country, making it the single largest expansion of LGBT workplace protections in our country's history."

The second occurred late in November, when Obama announced an executive order designed to reform current immigration law. While it is critical to note that 267,000 LGBT immigrants will not be covered by this reform proposal, 200,000 LGBT immigrants "are now eligible for lawful residence" (provided that they have a familial connection in the country), as ThinkProgress explains.

4. Cities pushed through their own non-discrimination and protection laws:

This year, 38 cities in America were deemed "perfect" by the HRC, scoring a 100% on the organization's Municipality Equality Index. This is 13 more cities with perfect scores than there were in 2013. "Of the 84 million people living in MEI-rated municipalities, 34 million have more inclusive laws at the municipal level than they do at the state level," the HRC writes in its report. "In an era where one-third of the states with marriage equality lack critical nondiscrimination protections for the LGBT community, this is of critical importance." Many of these "perfect" cities, too, address protections and rights specifically for the trans community; 26 more cities offer trans-inclusive health benefits than in 2013.

The LGBT community is nearly 5% less likely to have health care insurance than non-LGBT Americans. The expanded access afforded to the LGBT community this year, especially through Obamacare, was phenomenal. "In 2014, insurance companies will no longer be able to discriminate against anyone due to a pre-existing condition. And because of the law, insurers can no longer turn someone away just because he or she is lesbian, gay, bisexual or transgender," the White House wrote in a press statement. Since the inception of Obamacare, there has been a drop of uninsured LGBT Americans by 4.4%.

Outside the realm of the law, two other types of "rights" — one pertaining to religion, the other to media — marked significant victories for the LGBT community in 2014.

6. Pope Francis signals a shift toward inclusion in religion:

This year, Pope Francis has spoken in support of the LGBT community, most recently with his so-called "gay earthquake" statement, originally published in the "Relatio Post Disceptionem," beginning famously with the line, "Homosexuals have gifts and qualities to offer to the Christian community."

While the previous pontiff, Pope Benedict XVI, was virulently anti-gay marriage, Francis has softened his stance, which is very good news for millions of religious LGBT people and their allies around the world. The pope needs to do better, of course; conservative strands of Christianity (and other religions) continue to lead their anti-gay crusades. But the slightly more inclusive tone is a good start in terms of helping the LGBT faithful feel like they have a right to believe in whichever God they choose, without judgment or condemnation from church leadership.

7. Media outlets earned accolades for their LGBT representation and diversity:

From gay sex in ShondaLand to the critically acclaimed Web series "Transparent" (whose trans protagonist documents her gender transition and "coming out" to her family), 2014 was an amazing year for LGBT people in media — specifically in television. According to GLAAD's Where We Are on TV report: "Out of 813 primetime broadcast scripted series regulars, 32 will be LGBT this year, or 3.9%. This is up from 3.3% last year but still down from the record high of [4.4% in] 2012."

This is important because accurate representation of LGBT characters in pop culture can spur cultural change and acceptance; it's impossible not to see the positive impact that resulted from Ellen DeGeneres coming out of the closet, for example. But perhaps more importantly, LGBT children and adults have the right to see characters who look and act just like them on their favorite shows and in movies. These positive role models are essential. And they also just make for good television, as the runaway success of shows like "The Fosters," "Orange Is the New Black" and "Transparent" clearly show.

If 2014 is any indication, 2015 will see the nationwide recognition of same-sex marriage and the expansion of LGBT rights and protections in America.

And that's something to dance about.