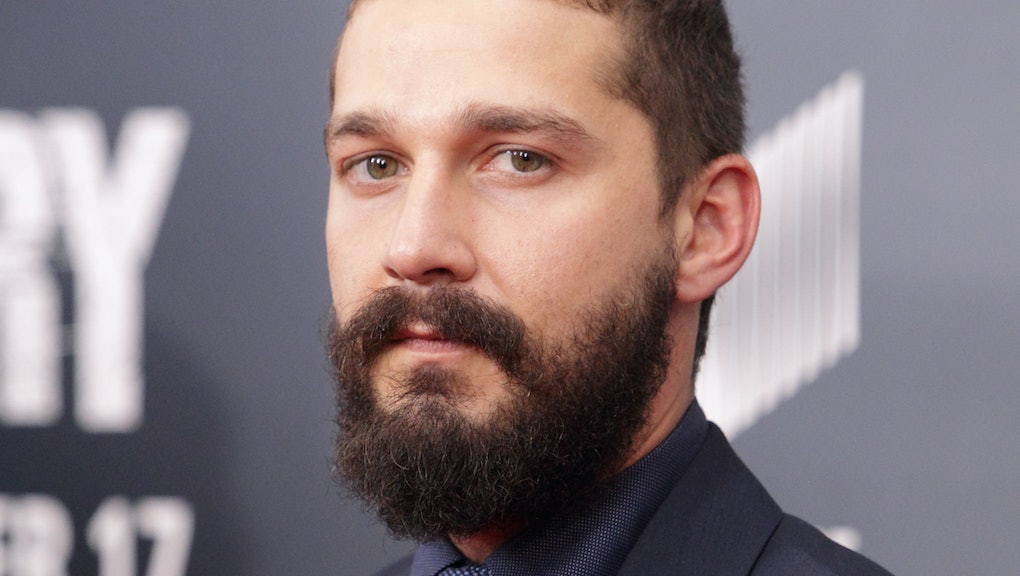 Shia LaBeouf’s Rape Claim Is No Joke, So Why Aren’t More People Taking It Seriously?

Actor Shia LaBeouf says he was raped during his performance art exhibit, #IAmSorry, in a Los Angeles gallery. The actor opened up about the incident in an email interview with Dazed Digital this week.

LaBeouf's exhibit, which ran for three weeks in February, featured the actor sitting in a room alone with a paper bag over his head that read, "I am not famous anymore." People were able to enter the room and do or say whatever they wanted to LaBeouf, who sat there silently.

But according to LaBeouf, one viewer took advantage of his artistic efforts:

"One woman who came with her boyfriend, who was outside the door when this happened, whipped my legs for 10 minutes and then stripped my clothing and proceeded to rape me. ... There were hundreds of people in line when she walked out with disheveled hair and smudged lipstick."

According to LaBeouf, when the woman exited the room, whispers of the incident quickly spread down the line of people waiting outside, eventually reaching his girlfriend who then came to check on him.

"When she came in she asked for an explanation, and I couldn't speak, so we both sat with this unexplained trauma silently. It was painful."

It's an extremely troubling story.

So far, reactions have ranged from the dismissive to the outright cynical. Some brushed his allegations off as part of his troubled mental state:

And others cast his accusations as a publicity stunt:

But there are multiple issues at play here. While America continues to talk predominantly about rape as a women's issue, research shows that women are by no means the only people victimized by sexual violence. We need to treat male claims of female rape with the same level of scrutiny and seriousness as we treat female claims.

On the other hand, if LaBeouf is lying about this incident — either as a publicity stunt or as part of his "performance art" — that is an equally serious problem. Rape is not a joke and it's certainly not a PR stunt. More importantly, false reports perpetuate the debunked idea that large numbers of people "cry rape," doing a huge disservice to real rape victims in the process.

LaBeouf deserves the benefit of the doubt, but a bombshell claim like that deserves clarification, especially given its implications for victims. LaBeouf also may not have reported the incident to police, something that is not uncommon with sexual assault victims. He also has a history of instability and addiction — but again, these facts don't inherently invalidate his claims. Indeed, the impulse to use past histories of emotional issues or substance abuse has long been a tactic of defense attorneys and rape apologists.

The fact that some people judge LaBeouf an "unreliable source" has no bearing on the veracity of his allegations. If true, this is a tragedy for the young actor. If false, however, this is also a serious problem. Whatever happens, the response cannot be to simply laugh and move on.