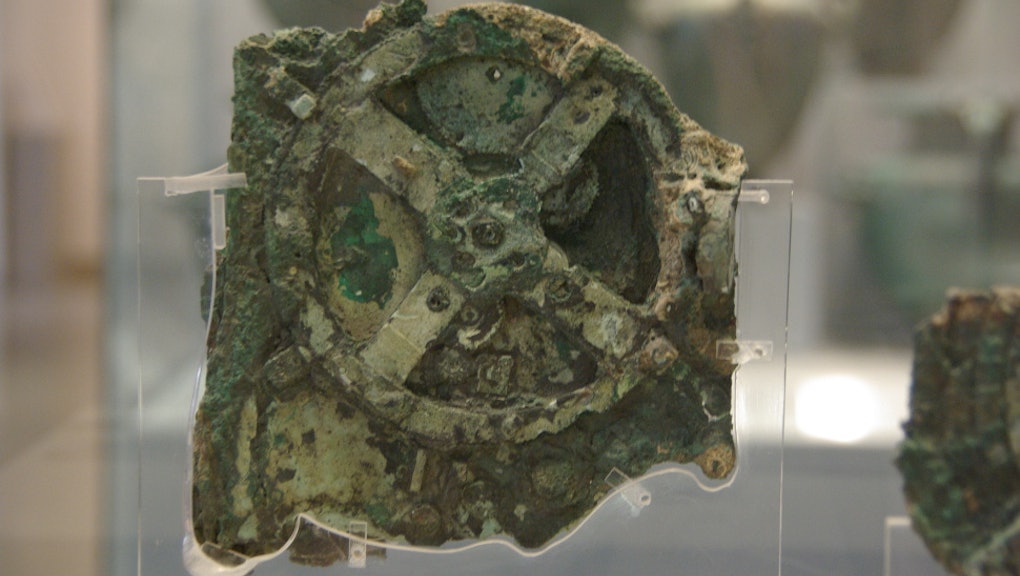 Scientists Have Made a Remarkable Discovery About the World's Oldest "Computer"

The news: As it turns out, sometimes ancient history can get a bit more ancient.

According to new research, the ancient Greek Antikythera Mechanism — sometimes called the world's "oldest analog computer" for its ability to predict lunar and solar eclipses and solar, lunar and planetary positions — may be much older than previously thought.

Based on recent analysis of the dials used to predict eclipses, Christián C. Carman, a science historian at the National University of Quilmes in Argentina, and James Evans, a physicist at the University of Puget Sound in Washington, have published new findings suggesting that the machine's dials actually start counting around 205 B.C., which would mean the device is 50 to 100 years older than researchers previously believed.

How it happened: The device, which was first discovered in an ancient shipwreck near Crete in 1901, uses various dials, gears and displays to track a number of things, including the dates of upcoming Olympic Games. However, the device was never really programmable, in the sense that once it was set, it ran more or less on a constant algorithm forever. But, because of this, researchers could track the patterns to determine the Antikythera's "epoch date," or starting point.

By comparing the dials and ancient Babylonian eclipse records, Carman and Evans hypothesize that the Antikythera was actually developed using Babylonian arithmetical methods borrowed by the Greeks, rather than newer Greek trigonometry, which would not have existed at the time.

And with this realization, a statement from the University of Puget Sound (UPS) notes that the research "fills a gap in ancient scientific history by indicating that the Greeks were able to predict eclipses and engineer a highly complex machine" much earlier than previously thought.

"The calculations take into account lunar and solar anomalies (which result in faster or slower velocity), missing solar eclipses, lunar and solar eclipse­ cycles, and other astronomical phenomena," explained the UPS statement. "The work was particularly difficult because only about a third of the Antikythera's eclipse predictor is preserved."

So what? While 50 to 100 years older might not seem like a huge deal, it has two main implications.

First, the Antikythera was already very old when it was shipwrecked outside Crete sometime between 85 and 60 B.C. This would mean that the Antikythera, and possibly other similarly advanced technologies, may have been in use years, decades or even centuries before we believed. While this is just one discovery surrounding one device, it could potentially open the floodgates for further examination of other such ancient wonders.

The other realization that comes with this discovery is that, unlike previously believed, Archimedes, the ancient Greek mathematician, physicist, inventor and astronomer, probably didn't have anything to do with this ancient technology. As the New York Times reports, in 2008 a group of researchers linked language found inside the device to Archimedes and many believed he was therefore its creator. However, Archimedes was killed in 212 B.C., which means a connection to the mathematicians is now even less likely.