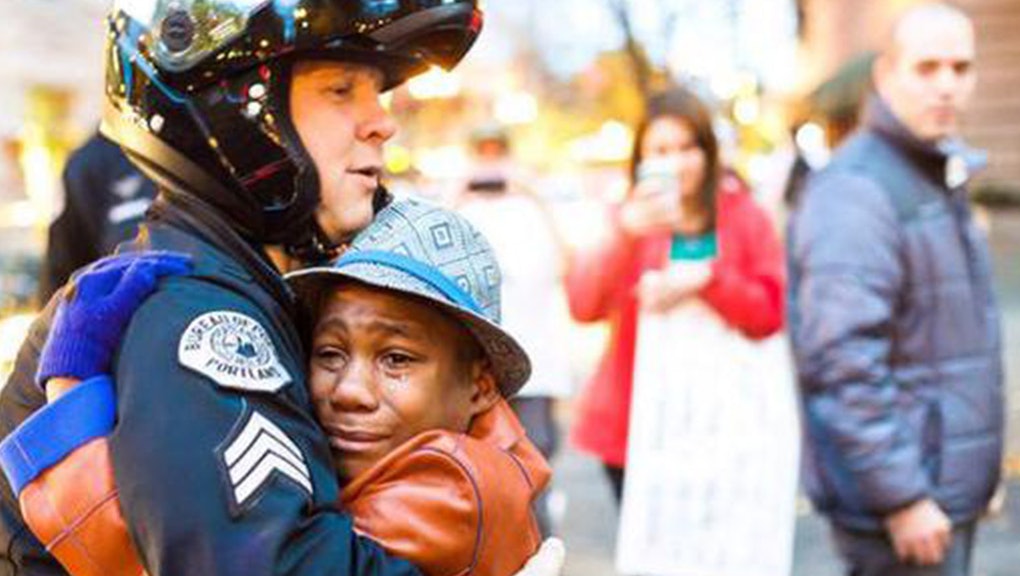 A photo of a police officer hugging a 12-year-old at a Ferguson protest in Portland, Oregon, is going viral at what might be the most opportune time.

The image shows Portland Police Sgt. Bret Barnum hugging Devonte Hart at the beginning of a Ferguson rally on Tuesday. Hart was wearing a "free hugs" sign, which caught Barnum's attention, sparked a conversation and ended the way you see above.

The photo has been shared hundreds of thousands of times on Facebook and across other social media sites. It's a stark contrast to images of police conduct in other places, especially the militarized response to protests in Ferguson and elsewhere.

The backstory: Hart's parents, Sarah and Jennifer, wrote a post on Facebook to explain exactly what went down.

I noticed Devonte was struggling. Tears. He wouldn't speak. He was inconsolable. My son has a heart of a gold, compassion beyond anything I've ever experienced, yet struggles with living fearlessly when it comes to the police and people that don't understand the complexity of racism that is prevalent in our society," they wrote ... After a while, one of the officers approached him and extended his hand. Their interaction was uncomfortable at first. ... There were generic questions about his favorite subject and what he liked to do in the summer, but the one that mattered hit straight to the heart. He asked Devonte why he was crying. His response about his concerns regarding the level of police brutality towards young black kids was met with an unexpected and seemingly authentic (to Devonte), "Yes. *sigh* I know. I'm sorry. I'm sorry." The officer then asked if he could have one of his hugs.

Barnum, a 21-year veteran of the force, had pointed to the sign and asked, "Can I get one of those?" After the hug, according to the Oregonian, Hart rejoined his friends and family while Barnum continued policing the rally.

What it means: A hug may be a brief gesture, but in the wake of Ferguson it feels more important than ever for people to see police reacting to protesters as caring community members rather than combative officers who are armed to the teeth.

There are lots of police-driven obstacles to a healthy relationship with their community, including everything from larger events like the killing of Michael Brown to specific policies like stop and frisk. Aggressive police tactics are actually linked with mental health issues among residents, according to a New York University study from earlier this year.

In a perfect world, these kind of tactics would be avoided. But that's not the world we live in — so it can take a little extra effort from police to make sure people understand that they're around to help, not hurt. Sometimes that effort can be as simple as a hug.

Police officers have a difficult and sometimes dangerous job, but it's a job that many of them do out of love for their community. The way this photo is spreading, it's clear that people could use a few more reminders of that love.