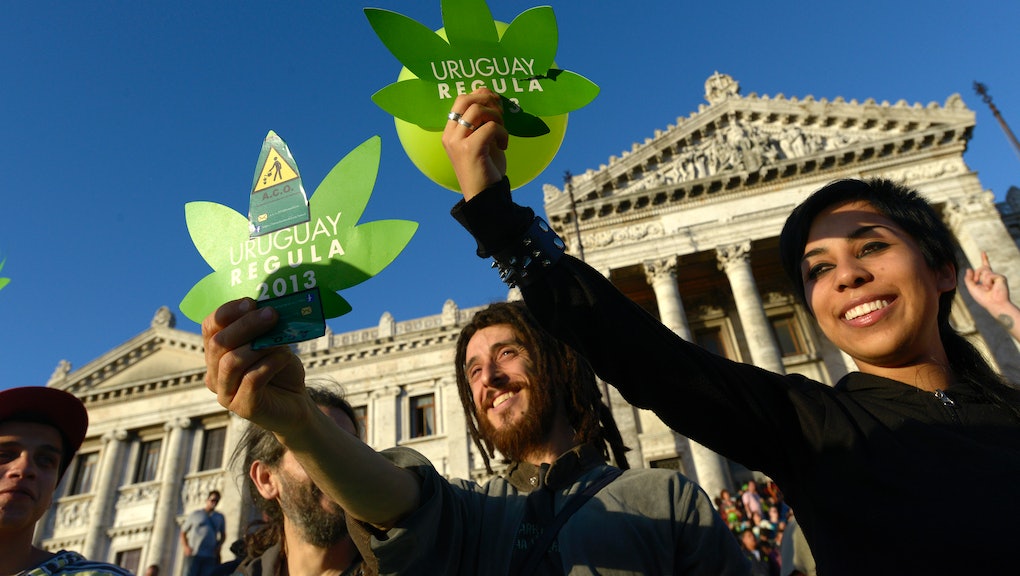 This Weekend, the Fate of Legal Marijuana Is on the Line

The news: On Sunday, one of the greatest social experiments in the modern world may come to an end.

Uruguay, which became the first country to legalize the production, sale and distribution of marijuana last year, will be voting in a special runoff presidential election, and, according to early polls, as many as two-thirds of Uruguayans support the repeal of the drug's legalization plan, reports the Washington Post, which could have major implications in the general election.

The original bill was proposed by the notoriously progressive President José "Pepe" Mujica, who championed the legislation through to passage in the country's senate. Currently, Mujica's successor, Tabare Vasquez of the leftist Frente Amplio (Broad Front), is holding onto a strong lead ahead of challenger Luis Lacalle Pou of the center-right Partido Nacional (National Party). However, with so much of the public sentiment in favor of repealing the marijuana law, the question is far from settled.

How could it be repealed? Last month, the more moderate Lacalle Pou told Reuters he would keep the part of the law allowing private citizens and local non-commercial organizations to grow a limited number of plants for their own consumption, but "repeal the rest, in particular the state's commercialization of the drug." And with this pro-repealing stance, Lacalle Pou's anti-marijuana platform could see a last-minute surge in Sunday's polls, both propelling him to victory and repealing the country's landmark marijuana law.

In other words, though Uruguay may not like Lacalle Pou, they may dislike marijuana even more, possibly enough to put the unpopular challenger in office.

Could we see this coming? At the time of the bill's passage in 2013, only 26% of Uruguayans supported it, notes Quartz, but Mujica's Broad Front majority was still able to push it into law. Since then, the country and its citizens have participated in what many described as a "great social experiment." However, it's unclear if that sentiment has maintained its strength, or if it's strong enough to lead to Lacalle Pou's election.

"People disagree with the law, but not vehemently," Hannah Hetzer, policy manager for the Americas at the Drug Policy Alliance, the largest drug policy reform organization in the United States, told Quartz. Hetzer has spent all of 2013 in Uruguay helping to market the bill to a general unsupportive Uruguayan population. "Our research, polling and surveys show that voters are waiting to see how the bill is implemented before they want it repealed."

Whatever the outcome, Uruguay's success in curbing drug trafficking (one of the goals of legalizing the drug in the first place) has other nations noticing. Nearby countries such as Brazil, Argentina, Chile and Ecuador are all considering similar legalization bills, all to deal with various degree of drug trafficking problems.

However, whether or not Lacalle Pou is victorious and Uruguay re-criminalizes marijuana, the proof is already in the pudding. Everything's online for the original great marijuana experiment in Uruguay, but, in many ways, we already know the results.