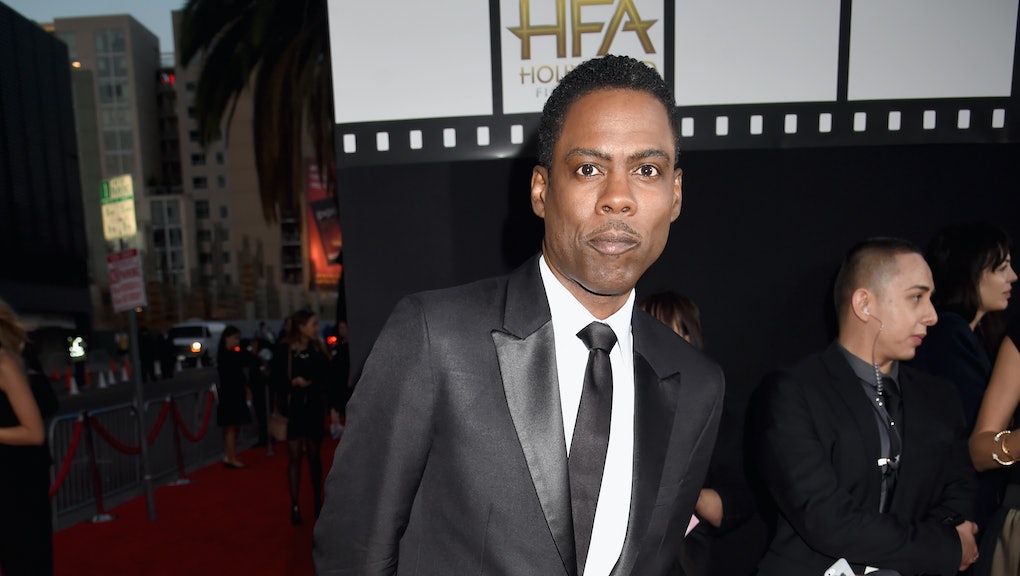 Chris Rock has been one of America's top comedians for more than 25 years, and his tools are sharp as ever, especially when it comes to issues of race in politics and daily life.

In a new lengthy interview with New York magazine's Frank Rich, Rock sliced up the prevailing narrative about "racial progress" and what the situation in Ferguson, Missouri, really means for the country.

Here's Rock with 47 words someone needs to carve into a mountainside:

"When we talk about race relations in America or racial progress, it's all nonsense. There are no race relations. White people were crazy. Now they're not as crazy. To say that black people have made progress would be to say they deserve what happened to them before."

Which brings us to the question of President Obama — and what his being elected, twice, means and will mean for young black Americans:

"So, to say Obama is progress is saying that he's the first black person that is qualified to be president. That's not black progress. That's white progress. There's been black people qualified to be president for hundreds of years. The question is, you know, my kids are smart, educated, beautiful, polite children. There have been smart, educated, beautiful, polite black children for hundreds of years. The advantage that my children have is that my children are encountering the nicest white people that America has ever produced. Let's hope America keeps producing nicer white people."

Indeed. What Rock does so brilliantly here — what he's done so brilliantly his whole career — is recalibrate a familiar question or experience ever so slightly, to devastating effect.

His answers arrive in stark contrast to what we've heard from conservative cultural commentators on cable news and in the more entrenched media. They have, predictably, made a hash of interpreting "what Ferguson means" in the broader lens of the American experience.

There have been instances of an early 1990s-style race-baiting revival, keynoted by former New York Mayor Rudy Giuliani. He went on NBC's Meet the Press last week and told Georgetown University professor and civil rights activist Michael Eric Dyson that "white police officers," like Ferguson's Darren Wilson, "won't be there if you weren't killing each other."

In simplest terms, Giuliani again turned the attention toward black people and how they behave. White police officers are only "there" because of that. They have, in Giuliani's telling, no other social standing.

Other white commentators have been more sensitive to the moment, but no more inclined to examine the harsh reality.

Rock says it's time to stop turning our brains inside out trying to infuse and extract meaning into and from everything that black people do. He thinks it's time for whites to grab a mirror and start examining what they can do to make things better.

"It's about white people adjusting to a new reality?" Rich asks.

Funny, but it's no joke. That inheritance, of course, is not just what grandma left you. It's an economic and social legacy accrued over 400 years of black slavery in the pre-Civil War U.S. through Jim Crow discrimination to today.

In the 151 years since the end of slavery, the actions of black Americans have been scrutinized and scolded, while whites are mostly allowed to carry on their way, occasionally and often grudgingly ceding some ground. Things are getting better, as Rock himself makes clear, but there is a long way to go and a psychic chasm still to be crossed.

What's happening now in Ferguson — and around the country — only puts more weight behind Rock's words.