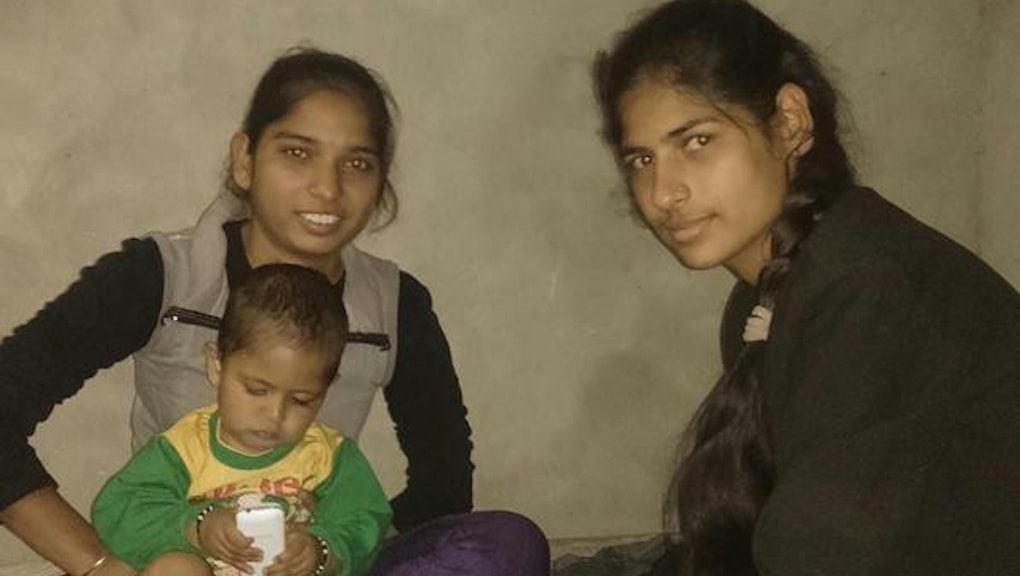 A video going viral this week shows a pair of Indian sisters (Arti Kumar, 22, and Pooja, 19) fighting back against an infuriating form of harassment known as "Eve-teasing."

The two college students were filmed being sexually harassed by three men on a Haryana Roadways bus as they were traveling home from school on Nov. 24. After repeatedly asking the men to stop, to no avail, the young women took matters into their own hands, hitting the men with belts and kicking at their groins.

You go, girls. The video is just further evidence of how sexual harassment makes women feel in real life.

"We boarded the bus from Rohtak bus stand, [and] this boy started teasing us by trying to give his phone number to us," one of the sisters said, according to the Telegraph. "When we protested, he called his friends and they started making obscene gestures. When I walked up to him, asking not to make such gestures, he grabbed me by the neck while others held back my sister. After heated exchanges, one of the boys called his friends, asking [them] to beat us up. One of them beat my sister while two others caught hold of me."

Unfortunately, the girls were ultimately overpowered, according to local paper the Hindu, and thrown off the bus while the driver and passengers watched. It's even more disturbing that bus passengers were allegedly trying to talk the sisters down. "During the course of the incident, many of the co-passengers were in fact seen dissuading the girls from lodging a complaint with the police," the paper reported.

A Twitter hashtag campaign, #RohtakBravehearts, has since been created to celebrate the sisters and shame the three men, as well as to call out the passengers who stood idly by and watched the assault occur.

While the rest of the passengers may have been indifferent, the young pregnant woman who recorded the video got off the bus at the following stop and ultimately took the sisters to the police station. The three young men, identified by the Times of India as "Mohit, Kuldeep and Deepak of Asan village," were taken into police custody Sunday evening. They will be charged this week with two crimes, "assault or criminal force with intent to outrage woman's modesty" and "voluntarily causing hurt," Rohtak SP Shanshank Anand told India Today.

The harassment of women in public places has a special name in India and other parts of southeast Asia: "Eve-teasing" is yet another way that men attempt to control and police women's bodies. "Eve-teasing is generally experienced outdoors, usually in the marketplace or on the streets, and the teaser is an unknown male," writes Tehniya S. Afridi for the Express Tribune.  "In sexual harassment, the harasser usually takes advantage of a higher rank, powerful position or physical strength. On the other hand, Eve-teasing is almost a recreational activity. It is 'fun' for the boys."

But as this video clearly shows, "Eve-teasing" (and sexual harassment in general) is not "fun" for women.

"According to the latest statistics from National Crime Records Bureau," reports Vocativ, "93 women are raped in India every day." That comes out to a rape occurring every 21 minutes.

The growing frustration with this problem has also led to more and more Indians taking justice into their own hands. The sisters' father, Rajesh Kumar, told the Times of India that he is proud of his daughters for fending off their attackers: "I am proud of them and expect other girls to follow them in the future."

The government of Haryana, too, is proud of these girls. The Times of India reports that it plans to honor them "with cash rewards on the occasion of Republic Day."