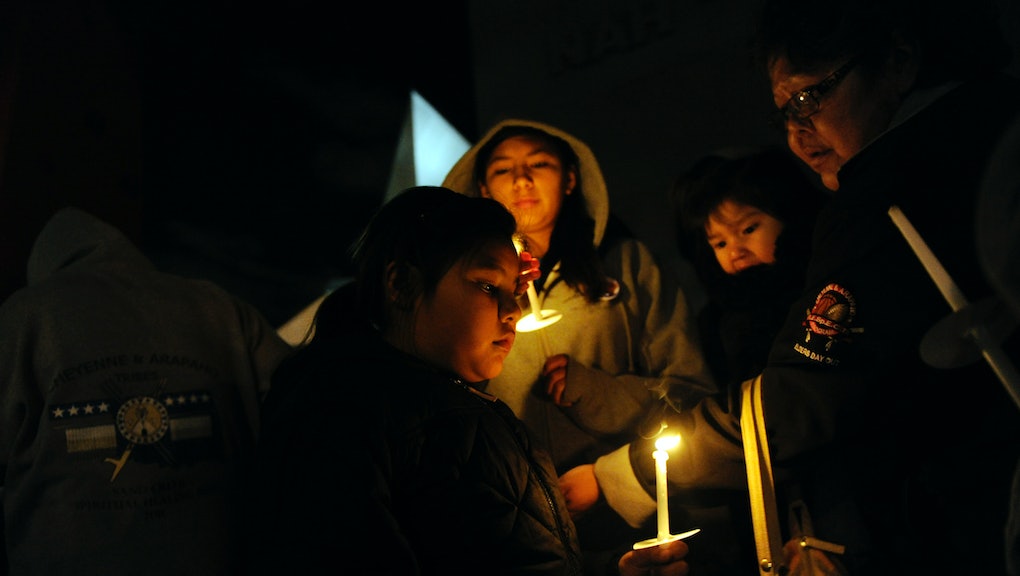 This Weekend Marked One of the Biggest Tragedies in U.S. History — and No One Even Cared

These are just a handful of days when Americans pause to remember those lost during wartime or in national tragedies. On these days, politicians deliver speeches calling for patriotism and unity so that the public "never forgets" these painful moments.

But the current list of days is woefully incomplete.

This past weekend marked the 150th anniversary of the Sand Creek massacre, where volunteer U.S. soldiers killed hundreds of Cheyenne and Arapaho Indians living peacefully in the Colorado territory. Thousands of Native Americans gathered in Colorado and across the country to pay homage and remember those who were murdered.

For the vast majority, Sand Creek is one more massacre lost to the dustbowls of history. When it comes to the legacy of U.S. governmental dealings with Native Americans, it has become culturally acceptable to forget. And yet with each passing anniversary, it becomes more important to make sure that in fact, the contributions of Native Americans are celebrated year-round, and that the memories remain alive.

In the middle of the 19th century, more than 700 people resided along Sand Creek, an area inhabited by the Cheyenne and the Arapaho after agreeing to a peaceful treaty with white colonists intent on gaining control of the land. Still, miners and settlers continued to infiltrate the area, fueling tensions despite ongoing talks.

Despite outward attempts to build trust, U.S. forces ultimately betrayed Native American leaders, and troops eased into the area. On Nov. 29, 1864, Col. John Chivington gave orders for volunteer soldiers to move forward with a surprise attack, targeting and killing hundreds of women, children and the elderly. Along with capturing the land, the soldiers stole property, even cutting off body parts to retrieve jewelry as souvenirs.

The Sand Creek massacre helped lay a foundation for the settlers to continue expanding their territory further west — even during the height of the Civil War — at the expense of countless Native Americans.

Although the U.S. government would learn of and, eventually, decry the massacre — even creating a national historic site — there was little accountability. Indeed, in Denver a bronze statue commemorating victory at the "Battle of Sand Creek" stood for many years. Others who were involved went on to have streets, towns and institutions named after them.

One notable example is John Evans, who was governor of the Colorado territory during the time of the massacre and who played a role in the events leading up to it. Although he lost his governorship during the massacre's fallout, he nevertheless went on to help found the University of Denver and Northwestern University, which is located in the Chicago suburb that is also his namesake. Even a mountain in Colorado boasting the highest paved road in North America bears Evans' name.

This is certainly not the first time the U.S. has created national holidays or memorials to celebrate the people who had a role in shaping America, albeit at the expense of Native Americans, blacks and other people of color. One need look no further than Oct. 12 to find evidence of this continued practice:

Sand Creek should be viewed as an opportunity to facilitate conversation about American history in the context of its original inhabitant. Even 150 years later, the pain still runs deep for Native Americans. It is a tragedy a nation so celebrated for its commitment to democracy and personal liberty would be unwise to forget.